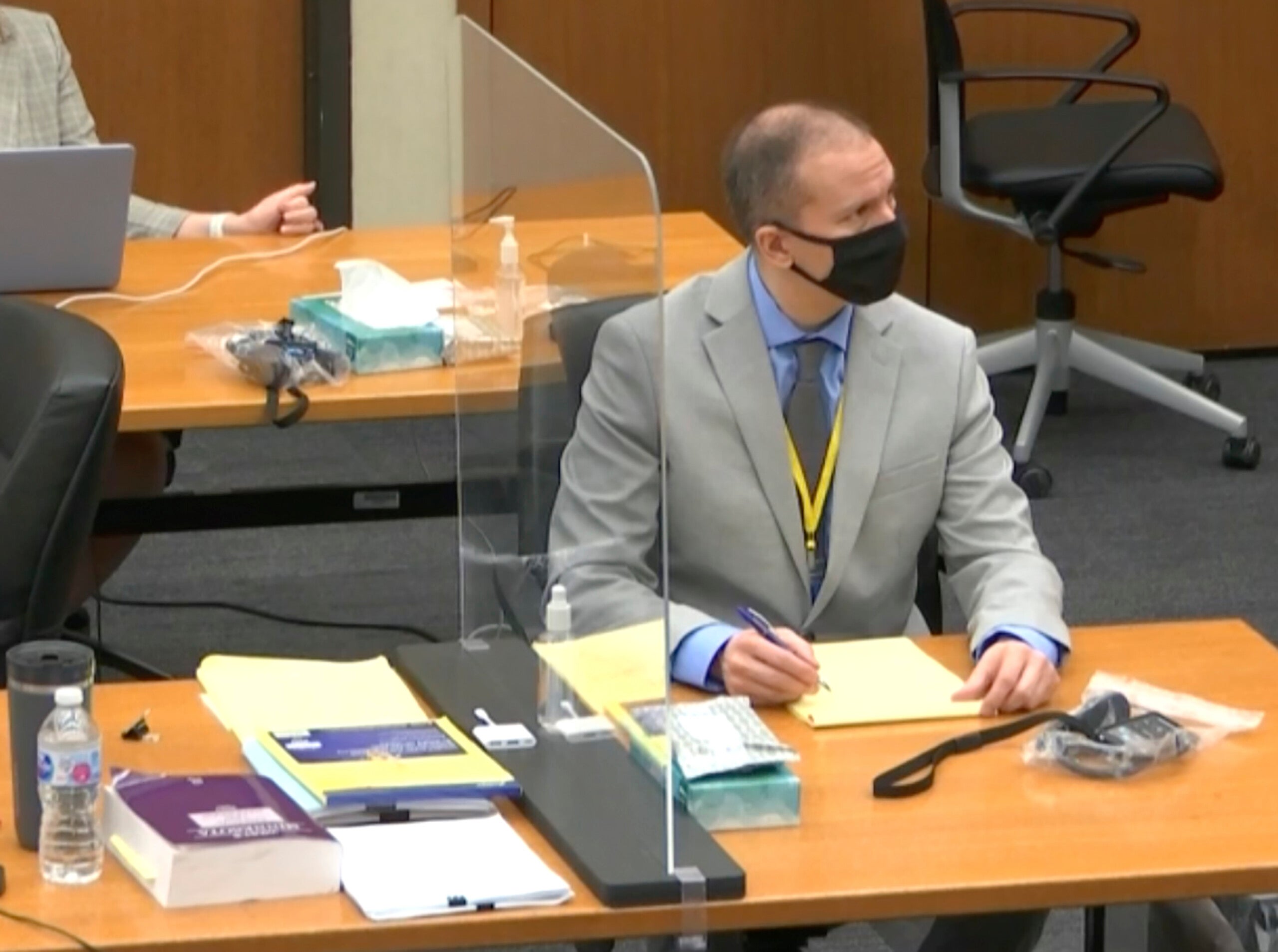 In this image from video, defendant and former Minneapolis police officer Derek Chauvin, right, listens as Hennepin County Judge Peter Cahill presides over pretrial motions before jury selection Tuesday, March 9, 2021 at the Hennepin County Courthouse in Minneapolis. Chauvin is charged in the May 25, 2020 death of George Floyd. (Court TV, via AP, Pool)
by: By STEVE KARNOWSKI and AMY FORLITI Associated Press
Posted: Mar 19, 2021 / 10:09 AM EST / Updated: Mar 19, 2021 / 10:09 AM EST

MINNEAPOLIS (AP) — A judge on Friday denied a defense request to delay or move the trial of a former Minneapolis police officer charged in George Floyd’s death after a $27 million settlement for Floyd’s family raised concern about a tainted jury.

Jury selection was halfway complete last week in former officer Derek Chauvin’s trial when the city of Minneapolis unanimously approved the payout to settle a civil lawsuit over Floyd’s death.

Chauvin’s attorney, Eric Nelson, called the timing of the settlement deeply disturbing and unfair, and said it jeopardized Chauvin’s chance for a fair trial.

Chauvin is charged with murder and manslaughter.

Floyd, who was Black, was declared dead May 25 after Chauvin, who is white, pressed his knee on Floyd’s neck for about nine minutes while he was handcuffed and pleading that he couldn’t breathe. Floyd’s death, captured on a widely seen bystander video, set off weeks of sometimes-violent protests across the country and led to a national reckoning on racial justice.

Just two more jurors were needed for the trial of a former Minneapolis police officer charged in George Floyd’s death, as the judge prepared to rule Friday on two major motions — including whether to allow evidence from Floyd’s earlier 2019 arrest.

The 12 jurors seated through Thursday are evenly split by race, with six white jurors, four Black and two multiracial, according to the court. The last two jurors chosen will be alternates.

Opening statements are March 29 if the jury is complete. That process was on track to finish nearly a week early despite news that the city would pay a $27 million settlement to Floyd’s family.

Former officer Derek Chauvin is charged with murder and manslaughter in the May 25 death of Floyd, a Black man who was declared dead after Chauvin, who is white, pressed his knee against his neck for about nine minutes. Floyd’s death, captured on bystander video, set off weeks of sometimes-violent protests across the country and led to a national reckoning on racial justice.

Hennepin County Judge Peter Cahill was to rule Friday on Chauvin attorney Eric Nelson ‘s motion to halt or move the trial due to concerns that the settlement had tainted the jury pool. But Cahill denied similar motions last year, and though some potential jurors were dismissed because they said news of the settlement would influence them, others were seated after saying either they hadn’t heard of it or could set it aside.

A likely bigger issue was Floyd’s 2019 arrest, just a year before his fatal encounter with Chauvin.

Cahill also previously denied the defense’s attempt to allow the year-old arrest at trial. But he heard fresh arguments this week because of drugs found in January in a second search of the police SUV in which the four officers attempted to put Floyd in 2020.

Nelson argued that similarities between the encounters are relevant, with Floyd calling out for his mother, claiming he had been shot before, crying and putting what appeared to be pills in his mouth.

Prosecutor Matthew Frank said the defense was simply looking for a backdoor way to portray Floyd as a bad person, and the only relevant issue in Floyd’s death is how he was treated by police.

Jurors added Thursday include a white registered nurse in her 50s who assured the court that she wouldn’t draw on her medical knowledge at Chauvin’s trial, and a Black woman in her 60s who said she didn’t watch the entire bystander video of Floyd’s arrest and didn’t know enough to form a firm opinion of Chauvin or Floyd.

The 12th juror seated, a white woman in her 40s who works in commercial insurance, said she has experience with someone who struggled with alcohol, and might view someone who uses drugs cautiously, saying they could act violently or aggressively when under the influence.

But she said she doesn’t believe someone who uses drugs or doesn’t cooperate with police should be treated poorly. “If someone uses drugs, I don’t think there should be ramifications of violence for that,” she said.

Three other former officers face an August trial in Floyd’s death on charges of aiding and abetting second-degree murder and manslaughter.