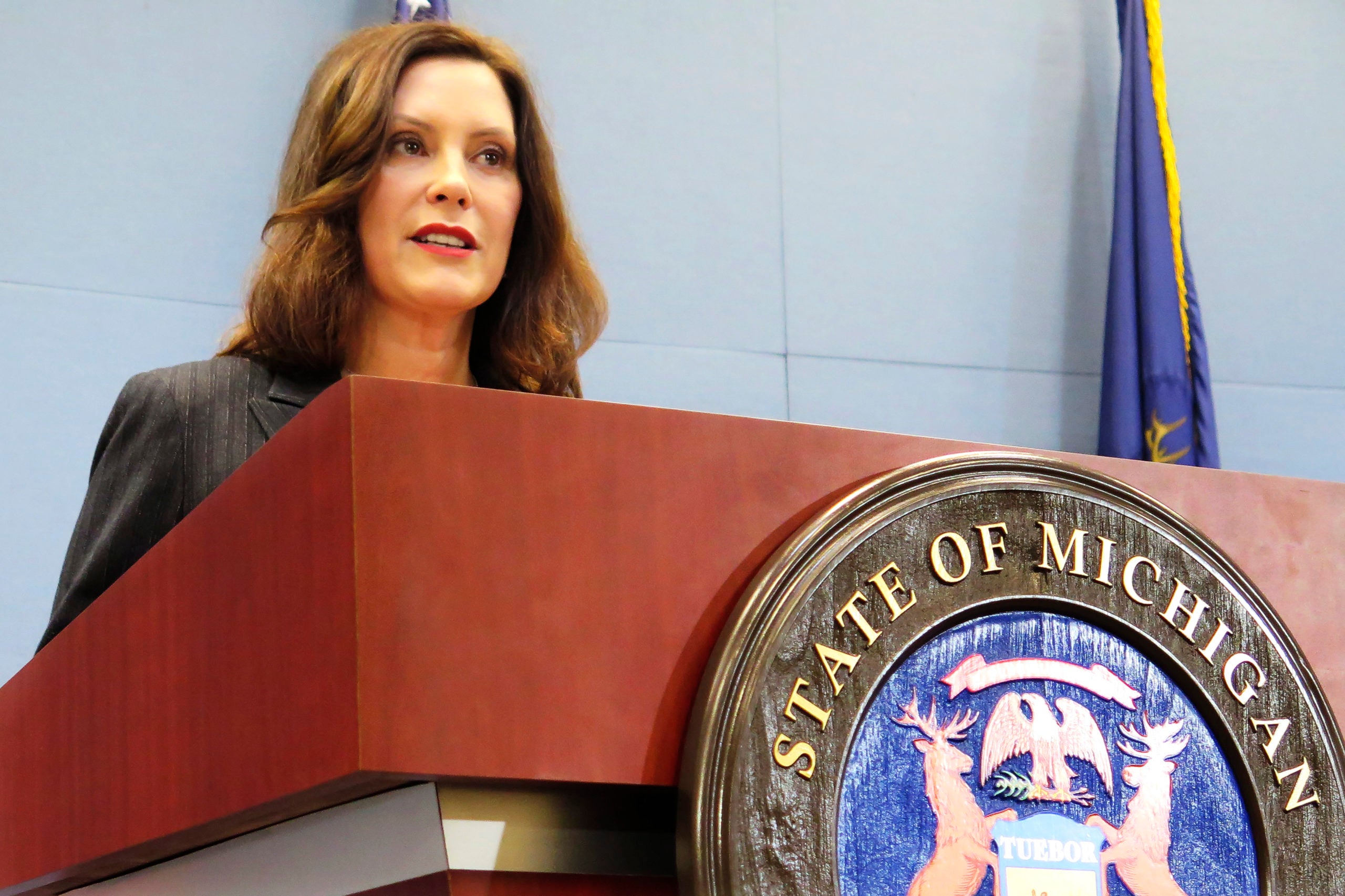 Michigan Gov. Gretchen Whitmer speaks with reporters, Tuesday, Feb. 4, 2020, at her office in Lansing, Mich., about delivering the Democratic response tonight to President Donald Trump's State of the Union address. She says she will focus on "dinner-table issues" such as infrastructure, jobs and health care. (AP Photo/David Eggert)
by: Sara Sidner and Elizabeth Joseph, CNN
Posted: Oct 19, 2020 / 06:53 AM EST / Updated: Oct 19, 2020 / 06:53 AM EST

(CNN) — Videos, photographs and text messages between individuals charged by the Department of Justice with conspiring to kidnap Michigan Gov. Gretchen Whitmer reveal details of their plan, their access to weapons and various training exercises.

One of the pieces of evidence is a video that was played in court showing the men doing training with weapons as they jump out of a vehicle and start firing their large rifles.

The imagery — which is being used as evidence against the six alleged conspirators — was provided to CNN affiliate WXMI by the US Attorney’s office and reviewed by CNN.

“Have one person go to her house, knock on the door and when she answers it just cap her,” reads one message in an encrypted group text thread.

That particular text message was also mentioned in the federal criminal complaint against the men.

In an encrypted group chat on September 17 that included Adam Fox, Ty Garbin, Kaleb Franks, Daniel Harris and Brandon Caserta — all charged in the alleged kidnapping plot, according to a federal complaint — Fox asked the group if they wanted to accept an invitation from a militia group to join an armed protest at the State Capitol.

“I would highly advise minimizing any communication with him. Also there needs to be zero and i mean zero public interaction if we want to continue with our plans,” Garbin replied.

“When the time comes there will be no need to try and strike fear through presence. The fear will be manifested through bullets,” Caserta said.

A video of Caserta — who allegedly attended tactical training exercises in Michigan and Wisconsin and was part of the September 13 meeting in which the plan to kidnap Whitmer was discussed — is included in the evidence obtained by WXMI.

“If this sh*t goes down, OK, if this whole thing, you know, starts to happen, I’m telling you what, dude, I’m taking out as many of those m*therf**kers as I can — every single one. … I’m sick of being robbed and enslaved by the state, period,” he says in the video.

It is unclear who he is speaking with or what exactly he’s referring to.

In another group message, someone shared a social media post that included a news article about Whitmer.

In another screengrab from a group text that same day, Garbin asks a person who would later act as an informant, and who is referred to in the federal complaint as “CHS-2,” how a surveillance trip had gone.

CHS-2 shared a map of the area — which is redacted in the evidence obtained by WXMI — to which Garbin replied in a mixture of words and emojis, “suggesting demolition of a bridge would hinder a police response,” federal authorities outline in the federal complaint.

CHS-2 provided the FBI with an image of a hand-drawn map of the lake near Whitmer’s vacation home with the distance of the nearest police departments and the estimated response time. A photo of Fox allegedly drawing that map is included in the evidence obtained by WXMI.

Paul Mitchell, an attorney for Garbin, said he did not approve of the kidnapping plot.

“Our client is not guilty and took steps to disavow and withdraw,” Mitchell said.

Under federal law, each of the six men faces “any term of years up to life in prison if convicted,” according to the Department of Justice.

Eight other men, all associated with the extremist group Wolverine Watchmen, have been charged by the state of Michigan in the alleged terrorist plot to kidnap Whitmer.