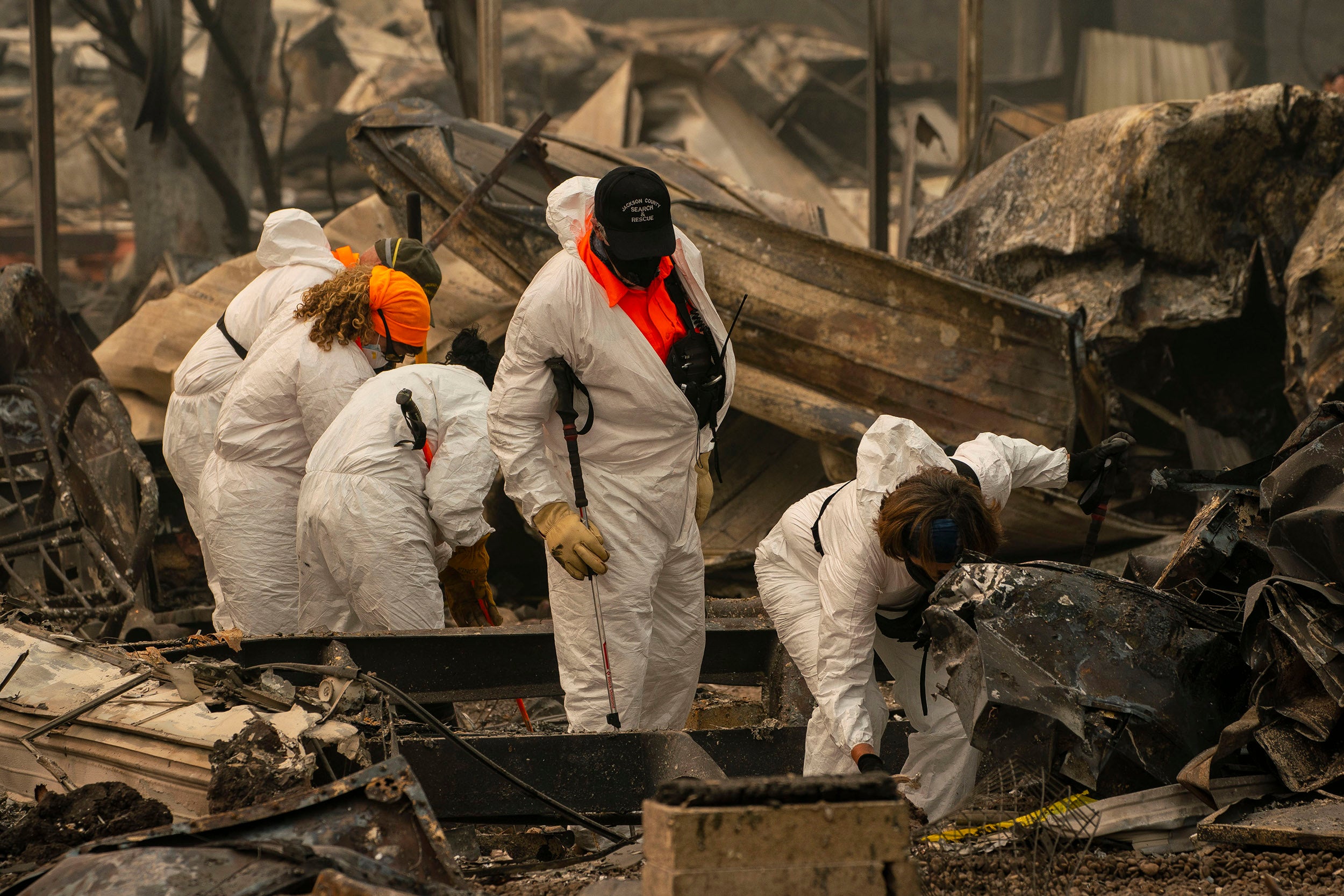 ASHLAND, OR - SEPTEMBER 11: Search and rescue personnel from the Jackson County Sheriff's Office look for the possible remains of a missing elderly resident in a mobile home park on September 11, 2020 in Ashland, Oregon. Hundreds of homes in Ashland and nearby towns have been lost due to wildfire. (Photo by David Ryder/Getty Images)
by: By Amir Vera, Eliott C. McLaughlin and Susannah Cullinane, CNN
Posted: Sep 13, 2020 / 10:59 AM EST / Updated: Sep 13, 2020 / 10:59 AM EST

(CNN) — Dozens of wildfires tearing through communities across the West have killed 33 people, and authorities fear dozens more are missing.

The footage and photos from the ravaged areas are perfectly apocalyptic, with scorched trees and telephone poles poking out from smoky gray, ashen landscapes. Buildings are reduced to piles of bricks, concrete and metal. Cars sit in driveways and along roadsides, blackened and gutted.

The Holiday Farm Fire east of Eugene, Oregon, which has torched more than 160,000 acres in the Willamette National Forest — an area slightly larger than the city of Chicago — is growing rapidly. It spread 5,000 acres Friday alone, officials say.

Caught in the middle of the forest is the small town of Vida, where Nailah Garner had to flee her dream home last week, she and her husband forced to scramble “like the Keystone Cops,” she told CNN affiliate KOMO.

“We didn’t know what to grab. We didn’t pack. Who knows what to do when you’re going through this?” she said.

Authorities have shut down the main road into the town of 1,200 situated on the picturesque McKenzie River. Only residents who need to retrieve their pets or emergency medications are allowed past the roadblocks, the station reported.

Garner could hear the sadness in her friend’s voice when she reported that Garner’s dream home was no more, KOMO reported. Wearing donated clothes, Garner explained she had lost everything.

Of the people killed since some of the fires broke out in mid-August, 22 have been in California, many of them in recent days. Ten people have been killed in Oregon, and one child was killed in Washington state.

Across the West, 97 large fires were burning Saturday, including 12 in Idaho and nine in Montana, according to the National Interagency Fire Center.

Smoke from the blazes is making air quality unhealthy, which can irritate lungs, cause inflammation and affect the immune system, heightening the risk of lung infections such as coronavirus.

In California, firefighters are battling more than two dozen major fires, but officials expressed hope that improving weather conditions will boost efforts to control the flames.

Little rain, high temperatures and strong winds helped fuel the flames, and it’s unclear how long it will take to get them under control.

The number of blazes is taxing firefighter resources. Angeles National Forest Fire Chief Robert Garcia’s department is fighting fires with 500 personnel, when they usually have 1,000 to 1,500, he said Saturday.

“This system is very, very well taxed right now with a number of large fires that are scattered, but particularly in California,” Garcia said, adding it’s common for firefighters to work over 24 hours on a shift.

The Bobcat Fire northeast of Los Angeles is tearing through the mountainous Angeles National Forest. Fires in the state have burned more than 3.2 million acres so far this year and more than 4,500 structures have been destroyed since August 15, Cal Fire says.

In the Sierra Nevada range north of Sacramento, the North Complex Fire has torn through the Berry Creek community and Plumas National Forest since a lightning storm sparked it August 17. It has consumed more than 258,000 acres.

The fire has killed at least 12 people, the US Forest Service said Saturday. The victims include a 16-year-old boy who was fleeing the area in his vehicle, Butte County authorities said. More than a dozen are missing, the sheriff’s office said this week.

“I cried. I cried for long time,” owner Mitch Dorghalli told the station. “The worst day in my life when I heard that news.”

In Oregon’s Clackamas and Marion counties south of Portland, smoke was so thick it was difficult to see more than 10 feet Saturday.

Four of the 10 people killed in Oregon’s wildfires died in the Beachie Creek Fire in Marion County.

Two victims identified by the Marion County Medical Examiner’s Office were Wyatt Tofte, 13, and Peggy Mosso, 71, both of Lyons, about 60 miles southeast of Portland.

Wyatt was found in a car with his dog in his lap while Mosso, his grandmother, was found in another car nearby. Her daughter and Wyatt’s mother, Angela, attempted to save her and was badly burned. Two other victims were located but have not been recovered because of treacherous conditions.

Dozens of people are missing, mostly across Jackson, Lane and Marion counties in western Oregon, Oregon Gov. Kate Brown said. The state is preparing for a “mass fatality incident” based on how many structures are charred, Oregon Emergency Management Director Andrew Phelps said.

About 500,000 people in the state are under some type of evacuation alert. Evacuation orders have been issued for more than 40,000, Brown said.

80% of buildings in Washington town destroyed

The past five days in Washington have made for the state’s second worst fire season in history, Gov. Jay Inslee said. As of Saturday, 15 major fires were burning in the state.

Elsewhere in Washington, a 1-year-old boy died and his parents were badly burned as they tried to escape the wildfire, officials said.

The family was visiting their property in a rural area west of Spokane and evacuated in the middle of the night when the wildfire got closer. They abandoned their vehicle and ran to a river to flee the flames, CNN affiliate KCRA reported. The couple was rescued from the river, but their son did not make it.

Another child was killed in the Cold Springs Fire in Omak, near the Canadian border, according to officials.

“My heart breaks for the family of the child who perished in the Cold Springs fire. I am devastated. The DNR family is devastated. The pain that family is going through is unfathomable,” Washington Commissioner of Public Lands Hilary Franz said Friday.

Earlier this week, Inslee visited Malden, a small town in eastern Washington, where 80% of the city’s buildings — including the fire station, post office, city hall and library — were destroyed.

“It looked like a bomb went off,” city officials said, according to CNN affiliate KIRO.

In Seattle, the Woodland Park Zoo said it is temporarily closing its doors Sunday because of the air quality, though a team will remain at the facility to monitor the animals for “respiratory compromise,” it said.