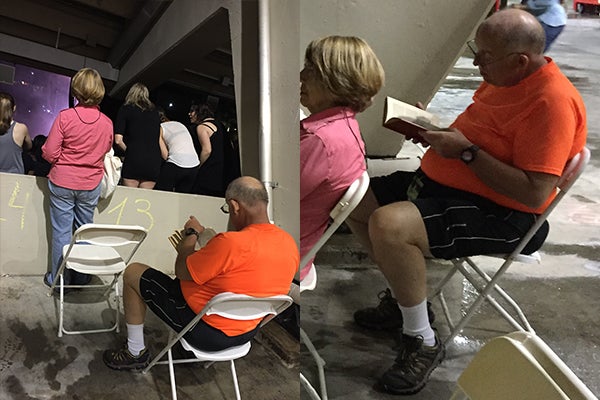 (MEDIA GENERAL/WCBD) – A video tweeted by Beyoncé fan, Michelle Gardner while she was enjoying the Beyoncé concert in Raleigh on Wednesday has gone viral because of what a man in the video was doing during the show. You could say he was more interested in the literature than he was in the “Lemonade.”

She shared a clip of a man sitting in his chair at the show, relaxing and reading a book while Beyoncé was on stage singing “Drunk in Love.”

Her caption was as hilarious as she found the moment; tweeting “When your wife makes you go to a @Beyonce concert with her  @FormationWT #raleigh“

She followed up on the original tweet and said: “it was pouring rain so I guess they moved under there to keep his book dry Queen still slayed it wet!”

Hiding from the rain or not, social media is very divided over the viral moment. Many are saying he’s wasting a perfectly good seat at the show, while others are saying he’s a trooper for tagging along with the lady who everyone is assuming is his wife.

When your wife makes you go to a @Beyonce concert with her ??? @FormationWT #raleigh pic.twitter.com/watALdPu4l– Michelle Gardner (@hellomichelleg) May 4, 2016

@DreaaaLove @Beyonce @FormationWT it was pouring rain so I guess they moved under there to keep his book dry ? Queen still slayed it wet!- Michelle Gardner (@hellomichelleg) May 4, 2016

Read some of the viral tweets below:

Disrespectful ?? I was there too & if I would’ve seen him I would’ve threw that book away & made him listen https://t.co/ZXbDa8lYRF– lil Janice (@Pairyonce) May 5, 2016

@MateenahHunter … At least he won’t constantly be telling us to sit down https://t.co/5YoKbN8vRQ– Yvonne van Niekerk (@Vonnicles) May 5, 2016

I am personally offended by this because I would sell my soul for Beyonce tickets right now… https://t.co/qFEOKDMZGK– boo boo the fool (@stonevancamp) May 5, 2016

This story was originally published by counton2.com.