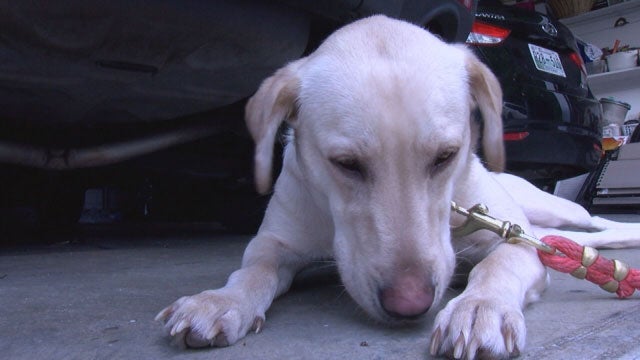 ADAMS, Tenn. (WKRN) – A man used his mountaineering skills to rescue a dog that fell 65 feet down a cliff in Adams, Tennessee.

Sixteen-year-old Jackson Lightner was walking his family’s foster dog Molly when she broke loose from the leash. She then ran toward an embankment and with no time to stop, fell down the bluff.

Lightner ran to get help, and a neighbor knew just the person to call.

“She called and knew I had climbing equipment since I had gone over the bluff before,” Matthew Kautz said.

Kautz has been mountaineering for a decade, but he’s never had to use his skills for a rescue.

“I just hooked up into a tree that was really stable and that was my anchor.”

Kautz repelled down what he guesstimates to be 65 to 70 feet.

“When I got down there she was kind of hiding under that overhanging rock and just kind of waiting, ready to leave.”

“She got very lucky that she had hit right there. Having that silt down there really saved her,” he explained.

Kautz then had to get the yellow lab back up the bluff.

It was a task only someone with Kautz’s skills could likely pull off.

“I thank God for everything that happened, how it played out,” Lightner said.

Molly, who lost her dewclaw in the process, is still looking for a forever home.