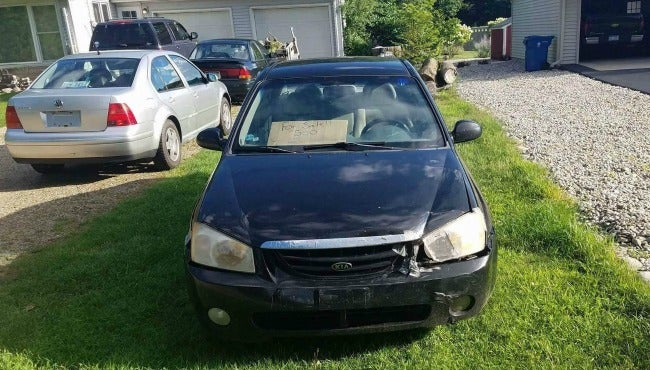 BATTLE CREEK, Mich. (WOOD) – “I feel like I got screwed over big time.”

He had just bought a new car, which meant it was time to part ways with his old 2004 Kia Spectra. So he posted an ad on Craigslist to sell it for cheap. Before long, a buyer came to check it out.

The buyer paid cash. Rozela took the plate, removed his insurance from the vehicle, signed over the title and made sure the buyer signed it, too. The deal was done.

Or so he thought.

“I completely forgot about the car,” he said.

Then, just a few weeks ago, he got a sudden reminder when the Michigan Secretary of State sent him a letter.

“It was impounded for almost three months,” Rozela recalled the notice saying. “You have 20 days or it’s going to auction. Whatever it makes will go towards the bill and whatever is remaining on the bill will be billed to me.”

Apparently, the car broke down on the side of road about a month after Rozela sold it. McClaine’s Towing in metro Battle Creek brought it to their lot, where it has been sitting for months.

“That’s not money I should pay,” he said.

The problem is that the car is still in his name because the title was never officially transferred to the buyer. Rozela watched the buyer sign it, but it was never taken to a Secretary of State’s office. And he doesn’t have any proof the deal was done.

“Biggest mistake I have here is (I) didn’t get a bill of sale,” he said.

Rozela called up the buyer, who claimed the car was gone when he and a friend returned to fix it. He told Rozela he had lost the title and Rozela’s number.

“The last thing he got to me was, ‘I don’t have the money.’ He hasn’t texted me, he hasn’t called me since,” Rozela said.

Target 8 was able to reach the buyer, but he hung up before explaining what happened.

The owner of McClaine’s Towing told Target 8 that this kind of thing happens at least once a month. The company cut Rozela the same deal it does with others who are saddled with bills for abandoned vehicles they thought they had sold. Rozela will pay the towing fee – $163, in this case – and sign over the title to McClaine’s, which will keep the car for parts.

Rozela said that at this point, that’s his best option. He’ll almost certainly end up paying less than he would if the car were to go up for action and he had to pay the difference on the full towing bill.

He hopes others will learn from his situation and be more careful and less trusting.

“My word of advice would be to, even if it’s a family member, make sure to get a bill of sale if you’re selling it to someone,” Rozela said.

The Secretary of States recommends sellers go with buyers to an office to make sure the title is officially transferred.