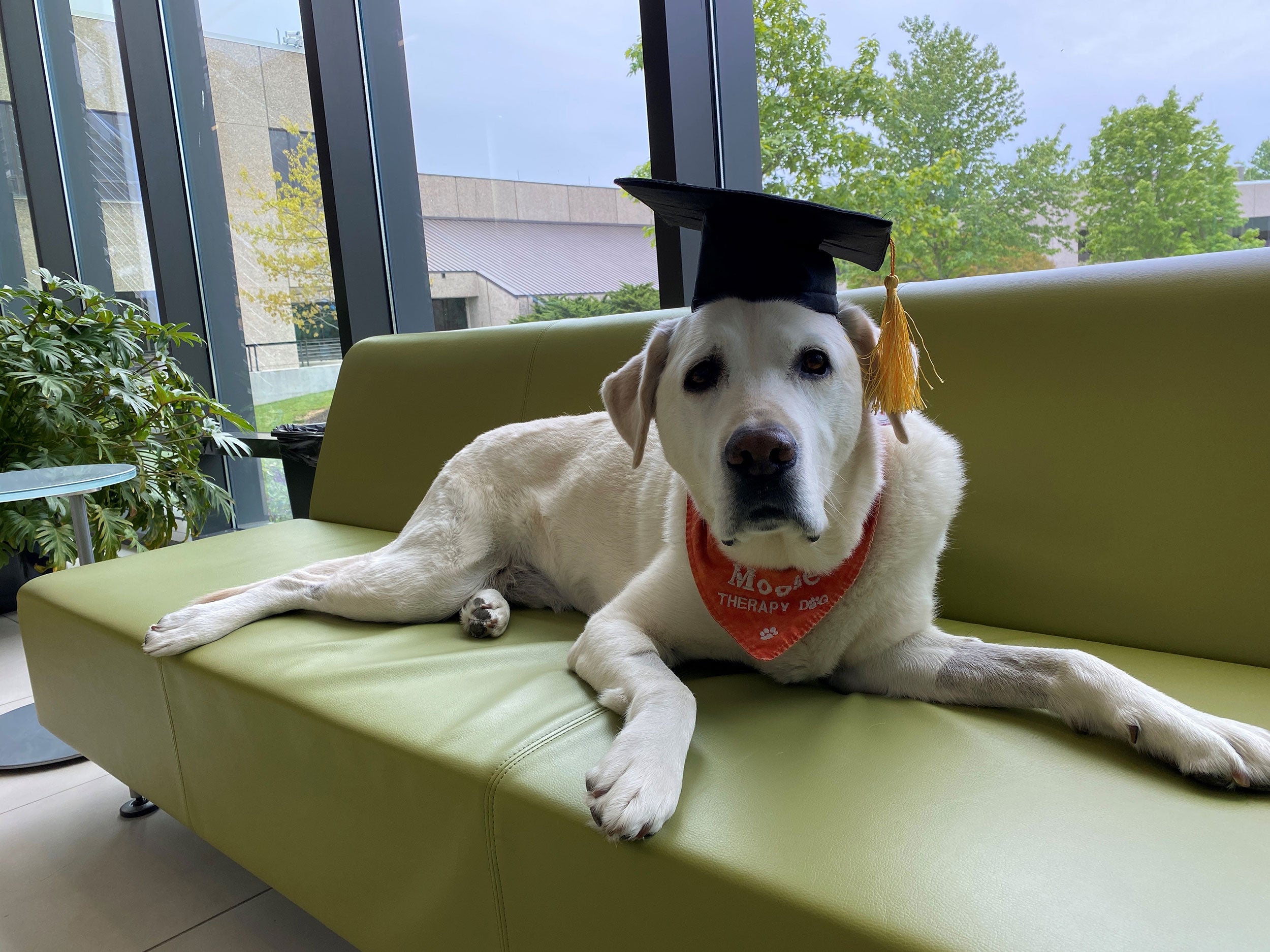 (CNN) — Like most universities, Virginia Tech’s College of Veterinary Medicine celebrated the class of 2020 with an online commencement ceremony. But unlike other schools, they included one very good boy in the graduating class: a dog named Moose.

The Labrador retriever, an 8-year-old therapy dog at the Cook Counseling Center, received an honorary doctorate in veterinary medicine on Friday.

Moose, who has been with Virginia Tech since 2014, is one of the school’s four therapy animals and ambassadors for mental health awareness.

Along with attending football games, club events, and new student orientations, Moose also helps students cope with anxiety, trauma and other mental health issues. The fluffy pup has helped thousands of students and assisted in more than 7,500 counseling sessions, according to his owner, licensed counselor Trent Davis

Davis, who has worked at the Cook Counseling Center for 10 years, launched the school’s animal-assisted therapy program to provide students with another form of comfort.

“Some humans haven’t had the best experience with other humans, or even other dogs. In both those cases, Moose provides a very safe and comforting force in the room,” Davis told CNN.

“These students see Moose as someone who’s going to accept them. They don’t worry about him judging them.”

While the coronavirus pandemic has made it difficult for students to visit Moose and the other dogs for therapy sessions, Davis said the center now offers regular open office hours virtually, for one hour three days a week.

Davis also holds in-person meetings if a student is having a crisis or emergency and asks to see one of the dogs.

All four of the school’s therapy dogs are beloved by the student body — but Moose, who received Virginia Veterinary Medical Association’s Animal Hero Award in 2019, is quite special.

“The students here talk a lot about how Moose has broken down the stigma around mental health care on campus,” Davis said. “Veterinarians are unfortunately a very challenged population. They have high rates of suicide, and this profession can be quite disturbing. He has really helped the students and staff at Virginia Tech and has gotten a lot of recognition for that.”

Moose has also faced challenges of his own.

A week after his birthday in February, Davis noticed blood in Moose’s urine. He was later diagnosed with prostate cancer and underwent radiation treatments. Moose’s treatment is ongoing, but he remains his usual happy self, Davis told CNN.

For Davis, it has been easy to recognize the incredible impact Moose has had on everyone who turns to him for support.

“I’ll often meet people and they’ll be petting him, and all of a sudden they’re on the ground, talking in a baby voice,” Davis said. “So when people ask, ‘How does this dog therapy thing work?’ I’m like kind of like this. I have never met you before and now you’re sitting one foot away from me petting the dog and talking to me about the meaning of life.”

Dr. Moose can’t do much with his new diploma, but he is looking forward to loads of treats, a swim at the beach and a good ol’ tug of war.