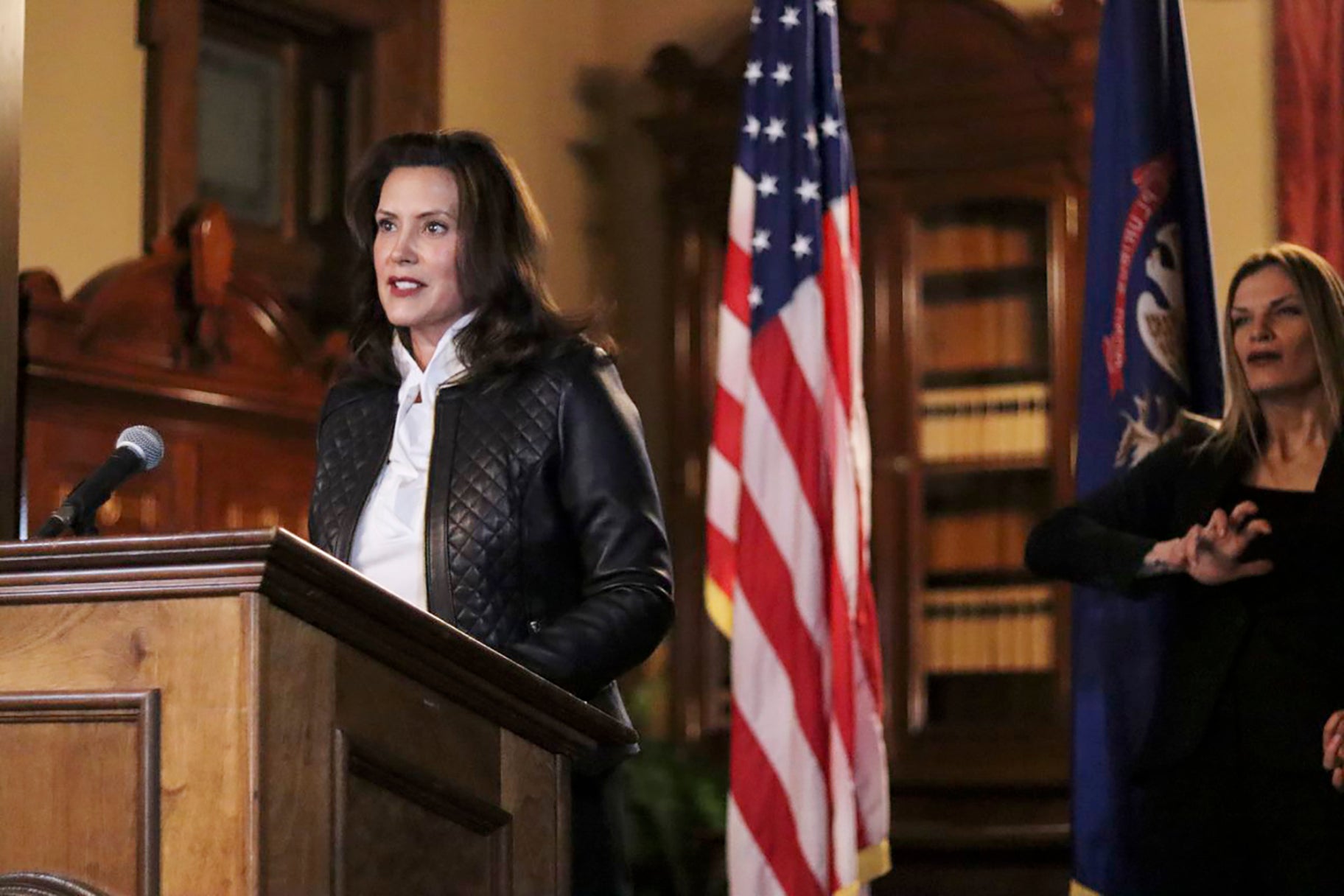 In a photo provided by the Michigan Office of the Governor, Michigan Gov. Gretchen Whitmer addresses the state during a speech in Lansing, Mich., Thursday, Oct. 8, 2020. The governor delivered remarks addressing Michiganders after the Michigan Attorney General, Michigan State Police, U.S. Department of Justice, and FBI announced state and federal charges against 13 members of two militia groups who were preparing to kidnap and possibly kill the governor. (Michigan Office of the Governor via AP)
by: DAVID EGGERT and ED WHITE Associated Press
Posted: Oct 9, 2020 / 03:10 PM EST / Updated: Oct 9, 2020 / 03:10 PM EST

LANSING, Mich. (AP) — Michigan Gov. Gretchen Whitmer said Friday that governors from both major political parties have reached out to her to share stories of extremism in their states since authorities revealed that a group of men had been plotting for months to kidnap her.

“I know this isn’t unique to Michigan, but this is uniquely American in this moment and it’s on all of us, people of good will on both sides of the aisle, to take it on,” Whitmer, a Democrat, told The Associated Press.

Authorities announced Thursday that they had foiled an incredible plot to kidnap Whitmer in a scheme that even included rehearsals to snatch her from her vacation home before the Nov. 3 election. Her first term as governor runs through 2022.

Six men were charged in federal court with conspiring to kidnap the governor in retaliation for what they viewed as her “uncontrolled power” and then take her to Wisconsin for a “trial,” according to a federal complaint.

Whitmer “loves the power she has right now. … She has no checks and balances at all,” the FBI quoted a leader, Adam Fox, as saying, based on surveillance.

Separately, seven others linked to a paramilitary group called the Wolverine Watchmen were charged in state court for allegedly seeking to storm the Michigan Capitol and seek a civil war. Four of them were accused of helping to scout Whitmer’s second home, and both groups trained together, according to state affidavit.

“There’s no question that these hate groups are domestic terrorists, and I think we need to call them that,” Whitmer said. “This is a group of people that are acting on bigotry and prejudice and acting with violence with intent to harm their fellow Americans.”

She said she had heard from other governors, Republican and Democratic, “to check in, to share some of the things that they’re seeing in their states as well.”

Earlier Friday, state Attorney General Dana Nessel told “CBS This Morning” that Whitmer was regularly updated about the investigation over the past few months.

“At times, she and her family had been moved around as a result of activities that law enforcement was aware of,” Nessel said.

Four of the six men charged in federal court had planned to meet Wednesday to make a payment on explosives and exchange tactical gear, the FBI said.

“We thought it was time to move in before anybody lost their lives,” Nessel said.

A message seeking comment was left for Fox’s attorney Friday.

Whitmer has been widely praised for her response to the coronavirus but also sharply criticized by Republican lawmakers and people in conservative areas who said her one-size-fits-all shutdown orders were excessive. Many have been eased seven months into the pandemic. The Capitol has been the site of many rallies, including ones with gun-toting protesters calling for her ouster.

The six men charged by federal authorities had discussed using explosives, including one under a highway bridge, to divert police from the area near Whitmer’s vacation home and even bought a Taser to use in the kidnapping, said Andrew Birge, the U.S. attorney in western Michigan.

Whitmer has pinned some blame on President Donald Trump, noting that he did not condemn white supremacists in last week’s debate with Joe Biden and instead told a far-right group to “stand back and stand by.”

She said she urged the White House and Republicans who control the Michigan Legislature “to bring the heat down” but “none of them have done a darn thing.”

Trump tweeted: “I do not tolerate ANY extreme violence.”

Five of the six federal defendants live in Michigan. Barry Croft, who lives in Delaware, was pardoned last year by Gov. John Carney for a series of crimes there, including possession of a gun during a felony and receiving stolen property, The News Journal reported.