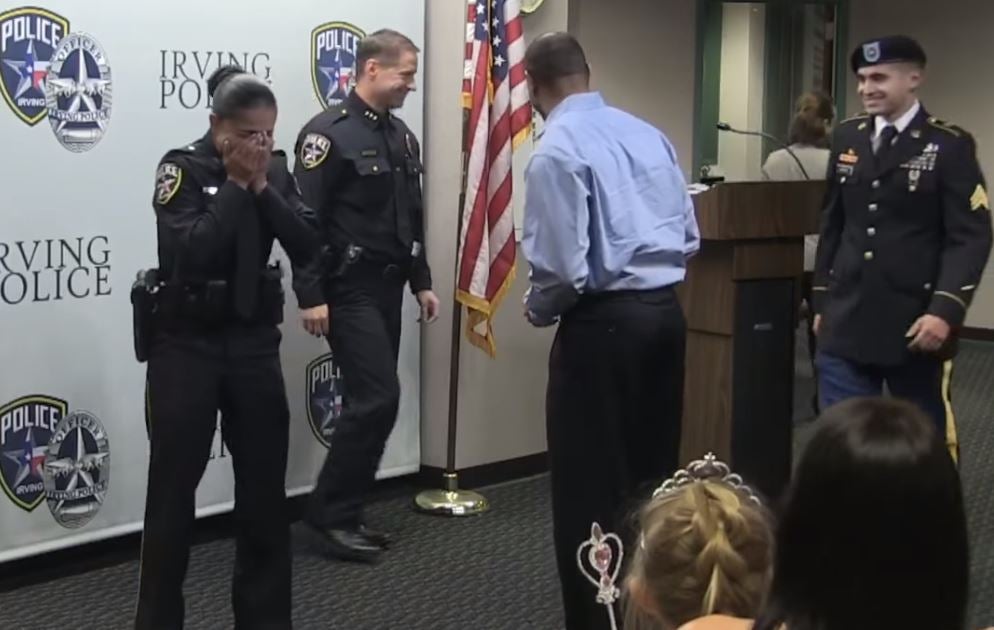 Officer Benning was brought to tears when her military son surprised her during her swearing-in ceremony. According to the Irving Police Department, Benning hadn't seen her son in more than two years. (Provided Photo/Irving Police Department)
by: Staff Reports
Posted: Feb 1, 2020 / 08:55 AM EST / Updated: Feb 1, 2020 / 08:55 AM EST

IRVING, Texas (WISH) — A video from a Texas police officer’s swearing-in ceremony has gone viral for all the right reasons.

Officer Benning with the Irving Police Department was sworn in during a ceremony Thursday.

“All swearing-in ceremonies are special but every once in a while one tugs at your heart strings a little more than others,” said the department on their official Facebook page.

Why was this particular ceremony so special? Officer Benning, who initially thought her husband would be participating in the ceremony, was brought to tears when her son made a surprise visit.

Benning’s son has been stationed overseas and his mother hasn’t seen him in over two years, according to the department.

In the video, Benning covered her face and tears filled her eyes when she realized her son was going to be the one pinning her badge.

The video has since been viewed more than one million times and shared by thousands.