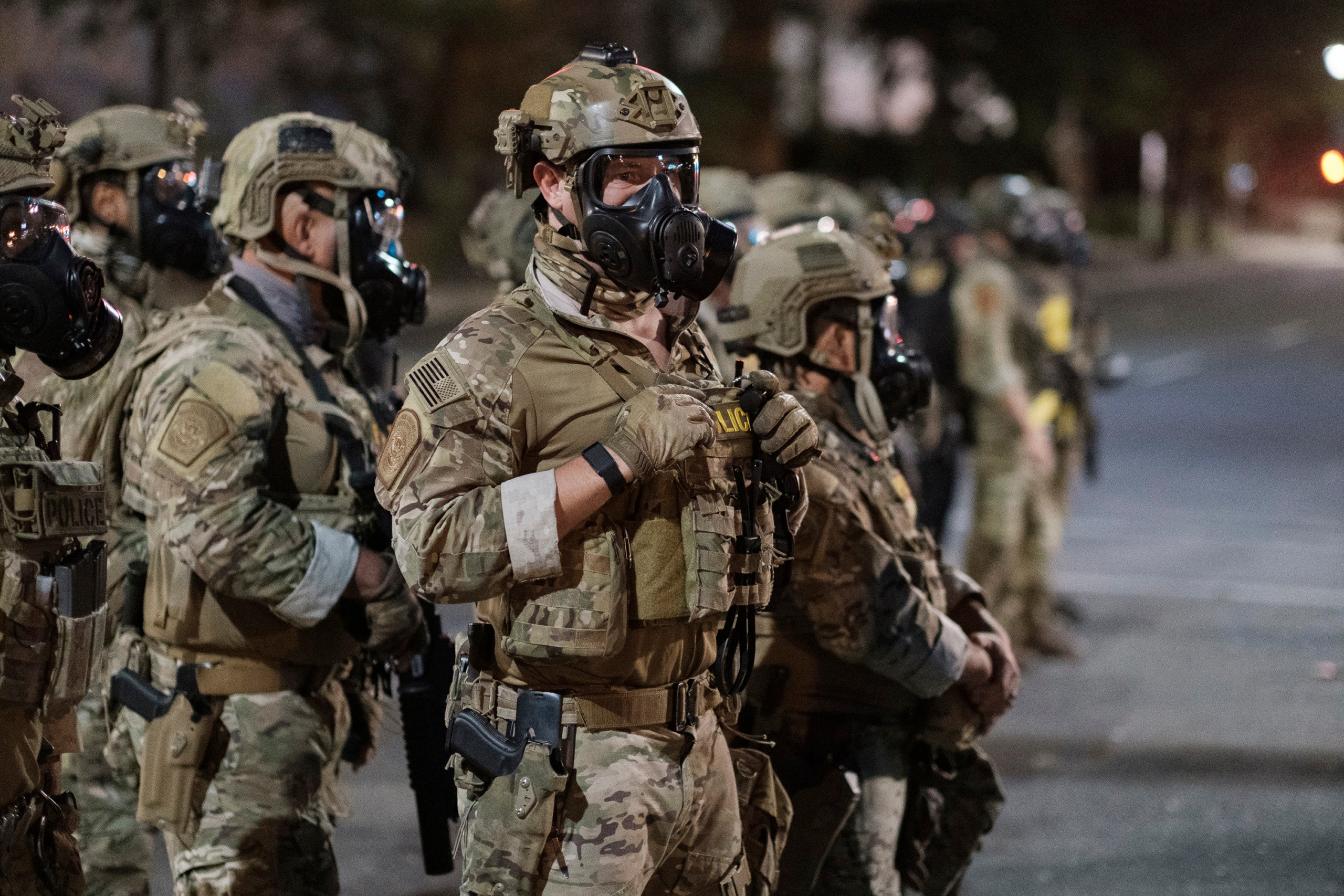 In this photo provided by Doug Brown, agents from different components of the Department of Homeland Security are deployed to protect a federal courthouse in Portland, Ore., Sunday, July 5, 2020. Protesters who have clashed with authorities in Portland are facing off not just against city police but a contingent of federal agents who reflect a new priority for the Department of Homeland Security: preventing what President Donald Trump calls "violent mayhem." The agents clad in military-style uniforms include members of an elite Border Patrol tactical unit, and their deployment to protect federal buildings and monuments is a departure for an agency created to focus on threats from abroad. (Doug Brown via AP)
by: Madeline Holcombe, CNN
Posted: Jul 22, 2020 / 05:28 AM EST / Updated: Jul 22, 2020 / 05:28 AM EST

(CNN) — More than a dozen mayors have joined Portland in asking the Trump administration to remove federal forces from or stop plans to send them to major American cities.

In a letter Monday addressed to Attorney General William Barr and Acting Secretary of the Department of Homeland Security Chad Wolf, the mayors called the administration’s intention to deploy federal forces against protesters an “abuse of power.”

The letter — signed by the mayors of Portland, Seattle, Atlanta, Chicago, Washington, DC, Boston, Philadelphia, Denver, Los Angeles, San Jose, Oakland, Tucson, Sacramento, Phoenix and Kansas City, Missiouri — calls on the administration to withdraw federal forces from the cities where they are currently deployed and halt plans to send them elsewhere.

Protesters and federal agents have clashed in Portland, where protests have lasted more than 50 days. Ahead of the July Fourth weekend, the Trump administration dispatched teams of federal agents to the city — the President said the effort was to protect federal property but protesters say the action itself has fueled the public’s outrage.

The letter says federal officers have used “significant force” against Portland protesters on a nightly basis, accusing the officers of having “snatched” a person from the street and placed them in an unmarked vehicle and shooting another in the head with a munition.

“These are tactics we expect from authoritarian regimes — not our democracy,” the mayors wrote.

The letter noted that President Donald Trump threatened to send forces to “clear out” protesters in Seattle and to “clean up” Chicago. The letter also accused federal forces of using “extreme action” against protesters in Washington, DC, without the mayor’s approval.

“The murder of George Floyd in Minneapolis sparked a national uprising and reckoning,” the letter said. “The majority of the protests have been peaceful and aimed at improving our communities. Where this is not the case, it still does not justify the use of federal forces. Unilaterally deploying these paramilitary-type forces into our cities is wholly inconsistent with our system of democracy and our most basic values.”

The protests in Portland began after Floyd’s death in police custody. Demonstrators have also called for justice in the deaths of Breonna Taylor, Ahmaud Arbery, Elijah McClain and other Black people.

But while peaceful Black Lives Matter marches have taken place during the day, at times protests devolved into arson and vandalism in a portion of the city at night. The result has been injuries to civilians and police, vandalism, arson and allegations of brutality.

In the last week, at least 40 protesters were arrested on charges varying from resisting arrest to disorderly conduct, according news releases from the Portland Police Bureau.

The state’s US Attorney last week called for an investigation into why some protesters were being taken by federal agents without badges and put into unmarked vehicles.

“I offered DHS support to help locally address the situation that’s going on in Portland, and their only response was: please pack up and go home,” Wolf said in an interview with Fox News. “That’s just not going to happen on my watch.”