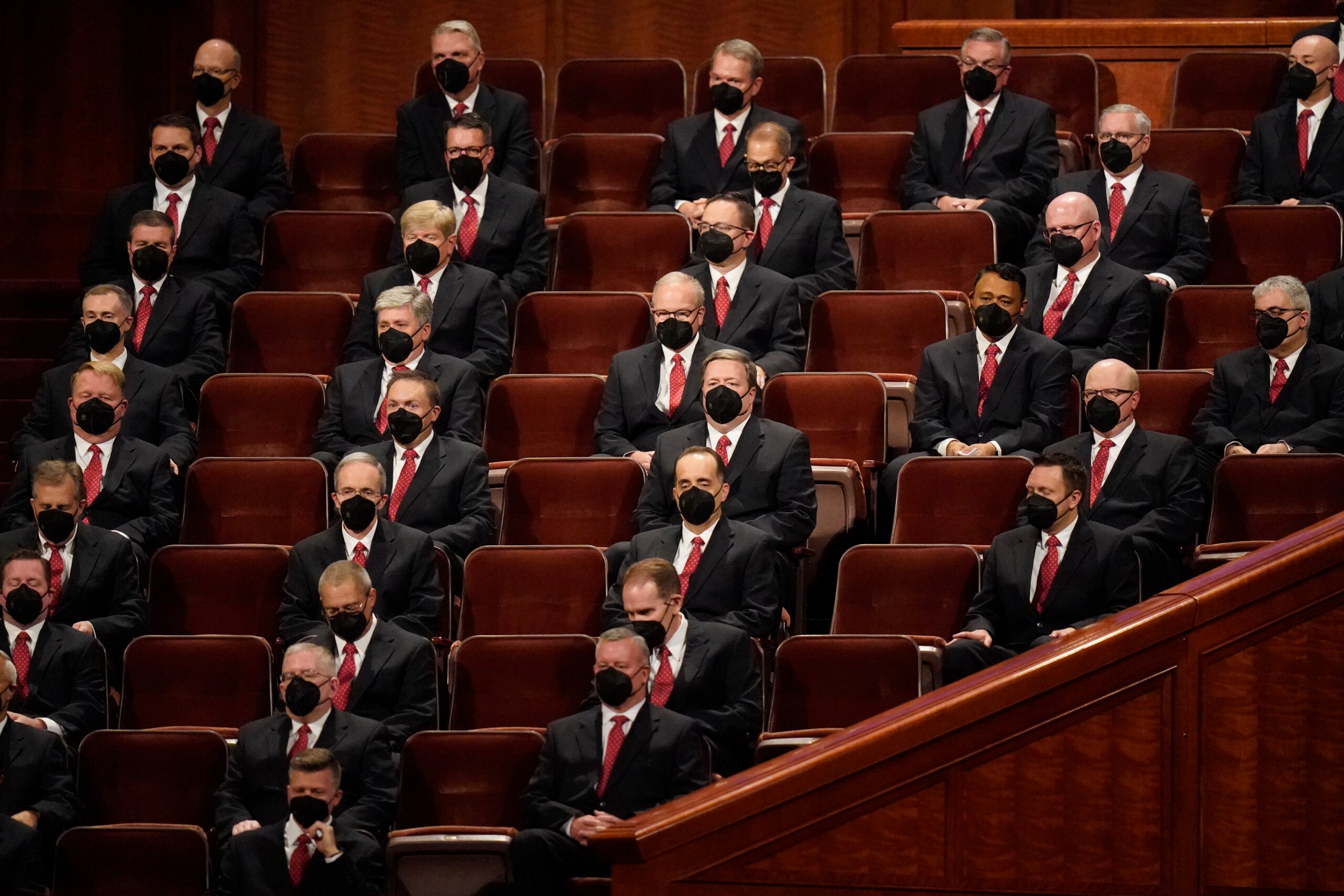 Members of the Tabernacle Choir at Temple Square look on during The Church of Jesus Christ of Latter-day Saints' twice-annual church conference Saturday, Oct. 2, 2021, in Salt Lake City. The Utah-based faith has repeatedly encouraged its 16 million members worldwide to limit the spread by getting vaccines and wearing masks. The conference is taking place again without full attendance due to the pandemic. (AP Photo/Rick Bowmer)
by: BRADY McCOMBS, Associated Press
Posted: Oct 2, 2021 / 10:26 PM EST / Updated: Oct 2, 2021 / 10:27 PM EST

SALT LAKE CITY (AP) — The president of The Church of Jesus Christ of Latter-day Saints urged members Saturday to listen to the faith’s leaders when they seek “pure truth” and expressed gratitude for those who have followed church guidance during the pandemic, which has been to get vaccinated against the coronavirus.

President Russell M. Nelson acknowledged at a church conference that the world is “still dealing with the ravages of COVID-19 and its variants.” And while he didn’t mention vaccines specifically, he thanked members for following the advice of church leaders, medical experts and government officials.

The Utah-based faith has repeatedly encouraged its 16 million members worldwide to limit the spread by getting vaccines and wearing masks.

“Contrary to the doubts of some, there really is such a thing as right and wrong. There really is absolute truth — eternal truth,” said Nelson, speaking from inside a mostly empty conference center in Salt Lake City. “One of the plagues of our day is that too few people know where to turn for truth. I can assure you that what you will hear today and tomorrow constitutes pure truth.”

The conference is taking place again without full attendance due to the pandemic, but for the first time in two years leaders were back at the faith’s 20,000-seat conference center with several hundred people watching in person.

The church’s well-known Tabernacle Choir at Temple Square was also back in person. However, it had fewer members than normal to allow for social distancing, and all members had been vaccinated, the church said.

Leaders spoke at the previous three conferences inside a smaller building with no choir and no attendees. Those conferences were the first to take place without full attendance in more than 70 years.

Most members of the faith known widely as the Mormon church are watching speeches during the two-day conference on TVs, computers and tablets from their homes around the world. Before the pandemic, the event would bring about 100,000 people to the church’s headquarters to listen to five sessions over two days.

The church push for people to get vaccinated has divided the faith, similar to larger society. Members who support the stance say they fear that some Latter-day Saints who refuse to get vaccinated are allowing their political views to supersede their loyalty to a faith that largely prioritizes unity and obedience. Other church members are upset that their leaders aren’t letting them exercise their own personal decision-making about vaccines and masks.

About 65% of Latter-day Saints who responded to a survey earlier this year said they were vaccine acceptors, meaning they’ve gotten at least one dose or plan to soon. Another 15% identified as hesitant, and 19% said they would not get the vaccine, according to the survey this summer from the Public Religion Research Institute, a polling organization based in Washington, and Interfaith Youth Core.

The survey found 79% of white Catholics and 56% of white Evangelical Protestants identified as vaccine acceptors.

In Utah, where The Church of Jesus Christ of Latter-day Saints is based and members account for nearly two-thirds of the 3.2 million residents, a summer surge of the virus among unvaccinated residents pushed hospitals to near capacity. Cases reached a peak in mid-September before declining over the past few weeks, mirroring national trends. About 65% of Utah residents 12 and older have been fully vaccinated, according to state data.

The pandemic wasn’t a central topic in conference speeches Saturday, with most speakers focusing on issues of spiritual guidance. Several speeches were prerecorded by international members of middle-tier leadership panels who couldn’t travel to the U.S. due to the pandemic.

In one of those, Erich W. Kopischke of Germany pleaded with members to better understand mental health issues and avoid being judgmental toward those struggling with such illnesses. He spoke about his son’s struggle with panic attacks, anxiety and depression that prevented him from finishing his church mission and caused him to consider suicide.

Kopischke acknowledged that he and his wife worried about what others would think and were disappointed and sad their son couldn’t complete a mission. Missions are considered a rite of passage for young members of the faith, and coming home early has long caused anguish for youth and their parents.

“It can be difficult for parents to identify their children’s struggles, but we must educate ourselves. How can we know the difference between the difficulties associated with normal development and signs of illness? As parents, we have the sacred charge to help our children navigate life’s challenges; however, few of us are mental health specialists,” Kopischke said. “We, nevertheless, need to care for our children by helping them learn to be content with their sincere efforts as they strive to meet appropriate expectations.”

Ulisses Soares of Brazil, who in 2018 became the first-ever Latin American member of a top governing panel called the Quorum of the Twelve Apostles, also encouraged members to be compassionate with others.

“We should never make harsh and cruel judgment of our fellow men and women, because we are all in need of understanding and mercy for our imperfections from our loving Heavenly Father,” Soares said.

Bonnie H. Cordon, president of the church’s program for young women, told young members to always remember God’s love for them. She was the only two woman who spoke during the sessions Saturday.

“Remembering this love can help you push back the confusion of the world that tries to weaken your confidence in your divine identity and blind you of your potential,” Cordon said.

Dallin H. Oaks issued a stern reminder for members to attend church regularly. He is the church’s second-highest ranking member as a first counselor to Nelson and member of the Quorum of the Twelve.

“If we cease valuing our churches, for any reason, we threaten our personal spiritual life, and significant numbers separating themselves from God reduces his blessings to our nations,” Oaks said.