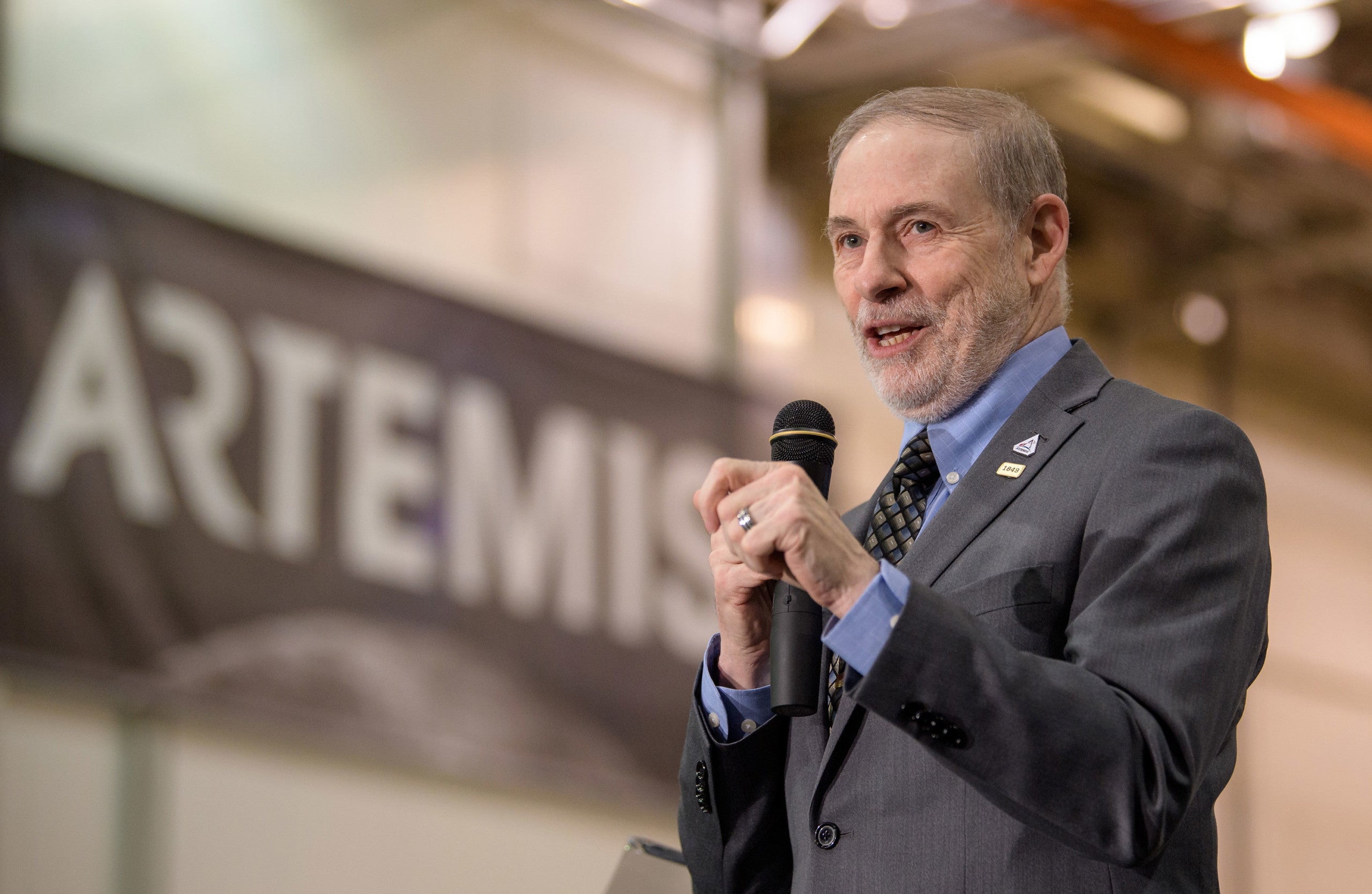 NASA Associate Administrator for the Human Exploration and Operations Mission Directorate Doug Loverro gives remarks on the agency’s Artemis program, Monday, Dec. 9, 2019, at NASA’s Michoud Assembly Facility in New Orleans. Through Artemis NASA will land the first woman and next man on the Moon by 2024. Photo Credit: (NASA/Bill Ingalls)
by: CNN Wire
Posted: May 20, 2020 / 04:09 PM EST / Updated: May 20, 2020 / 04:27 PM EST

(CNN) — NASA’s chief of human spaceflight, Doug Loverro, is departing the space agency after just six months in the role. In a farewell note to colleagues, which was obtained by reporters on Tuesday, Loverro said he was resigning over a “mistake” he had made earlier this year.

His departure was effective on Monday.

The incident in question was related to the Artemis Program, a source familiar with the matter told CNN Business.

The Artemis Program seeks to return astronauts to the moon by 2024, which was announced by the Trump administration last year and has been criticized as unrealistic. The source familiar with the reason for Loverro’s departure said the issue centered on contracts that were awarded earlier this year for development of lunar landers, or vehicles that can carry astronauts to the moon’s surface.

When reached by phone Tuesday evening, Loverro declined to comment on the reason for his departure.

Loverro began serving in his role as the head of NASA’s human spaceflight programs in December, replacing William Gerstenmaier, who served in the role for more than a decade. In his nearly 700-word note, Loverro told NASA workers only that leaders are “called on to take risks” and added that, “I took such a risk earlier in the year because I judged it necessary to fulfill our mission.”

“Now, over the balance of time, it is clear that I made a mistake in that choice for which I alone must bear the consequences,” Loverro wrote. “And therefore, it is with a very, very heavy heart that I write to you today to let you know that I have resigned from NASA effective May 18th, 2020.”

NASA’s Office of the Inspector General announced an audit of the agency’s acquisition strategy for the Artemis program in March, though it’s unclear if that review was related to Loverro’s departure. It’s also unclear exactly what role Loverro played in the selection process.

The source familiar with the matter, who asked to remain anonymous because the space agency has not yet publicized details, told CNN Business that the incident in question was unrelated to NASA’s historic milestone next week when SpaceX, NASA’s partner in the Commercial Crew Program, launches two astronauts to the International Space Station. That mission will mark the first time since 2011 that humans have launched into orbit from US soil, and Loverro was slated to preside over a final technical review meeting on Thursday, ahead of launch on May 27. Steve Jurczyk, NASA’s associate administrator, will take over Loverro’s role at that meeting, according to NASA.

Congresswoman Eddie Bernice Johnson, a Democrat from Texas who chairs the House space and science committee, said in a statement that she was “shocked” by the news.

“I trust that NASA Administrator Bridenstine will ensure that the right decision is made as to whether or not to delay the launch attempt,” Johnson said. “Beyond that, Mr. Loverro’s resignation is another troubling indication that the Artemis Moon-Mars initiative is still not on stable footing. I look forward to clarification from NASA as to the reasons for this latest personnel action.”

Kendra Horn, a Democrat from Oklahoma who chairs a House subcommittee on space, said in a tweet Tuesday that she is “deeply concerned over this sudden resignation, especially eight days before the first scheduled launch of US astronauts on US soil in almost a decade.”

The timing of Loverro’s departure was related to when Jurczyk, the associate administrator, made a recommendation to NASA Administrator Jim Bridenstine, the source said. It was unrelated to next week’s Crew Dragon launch, the source added.

Jurczyk was the source selection officer for the Artemis lunar lander contract awards, according to public documents.

In announcing Loverro’s appointment in October, NASA chief Jim Bridenstine called Loverro “a respected strategic leader in both civilian and defense programs” who “will be of great benefit to NASA at this critical time in our final development of human spaceflight systems for both Commercial Crew and Artemis.”

An agency-wide email sent on Tuesday said Loverro “hit the ground running” after his appointment in 2019 and had made “significant progress in his time at NASA.”

“His leadership of [NASA’s Human Exploration and Operations] has moved us closer to our goal of landing the first woman and the next man on the moon in 2024,” the email said. It said his resignation was effective immediately, though it did not provide details on the reason for his exit.

Loverro told CNN Business he is “100% confident” that leadership will be able to carry out the SpaceX mission. He added that he believes NASA’s ambitious human spaceflight goals are “doable.” “But,” he added, “it will take risk takers to get us there, and I hope folks who step in my shoes will continue to take risks.”

Next week’s SpaceX launch will mark the space agency’s highest-profile mission since the Space Shuttle program ended in 2011. SpaceX, which has a multibillion-dollar contract under NASA’s Commercial Crew Program, has worked for the better part of a decade to ready its Dragon spacecraft for crewed flights to the International Space Station. Since the Shuttle retired, NASA has had to rely on Russia for rides to the ISS.