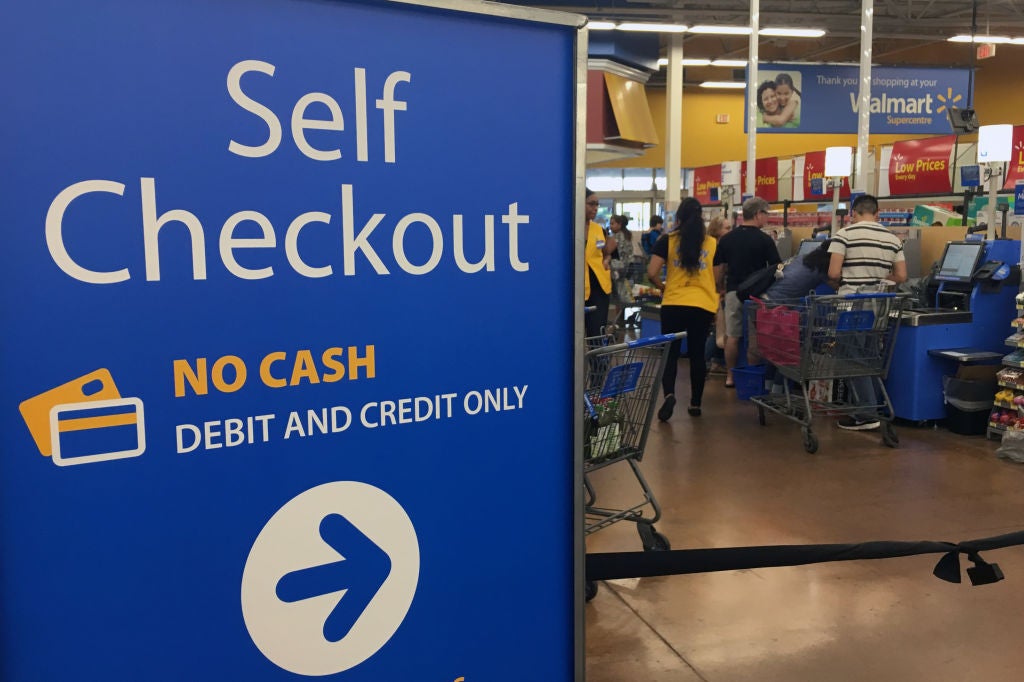 “Please place item in the bag.”

If you’ve encountered these irritating alerts at the self-checkout machine, you’re not alone.

According to a survey last year of 1,000 shoppers, 67% said they’d experienced a failure at the self-checkout lane. Errors at the kiosks are so common that they have even spawned dozens of memes and TikTok videos.

“We’re in 2022. One would expect the self-checkout experience to be flawless. We’re not there at all,” said Sylvain Charlebois, director of the Agri-Food Analytics Lab at Dalhousie University in Nova Scotia who has researched self-checkout.

Customers aren’t the only ones frustrated with the self-checkout experience. Stores have challenges with it, too.

The machines are expensive to install, often break down and can lead to customers purchasing fewer items. Stores also incur higher losses and more shoplifting at self-checkouts than at traditional checkout lanes with human cashiers.

Despite the headaches, self-checkout is growing.

In 2020, 29% of transactions at food retailers were processed through self-checkout, up from 23% the year prior, according to the latest data from food industry association FMI.

This raises the question: why is this often problematic, unloved technology taking over retail?

Making customers do the work

The introduction of self-checkout machines in 1986 was part of a long history of stores transferring work from paid employees to unpaid customers, a practice that dates all the way back to Piggly Wiggly — the first self-service supermarket — in the early 1900s.

Instead of clerks behind a counter gathering products for customers, Piggly Wiggly allowed shoppers to roam the aisles, pick items off the shelves and pay at the register. In exchange for doing more work, the model promised lower prices.

Self-checkout, however, was designed primarily to lower stores’ labor expenses. The system reduced cashier costs by as much as 66%, according to a 1988 article in the Miami Herald.

The first modern self-checkout system, which was patented by Florida company CheckRobot and installed at several Kroger stores, would be almost unrecognizable to shoppers today.

Customers scanned their items and put them on a conveyor belt. An employee at the other end of the belt bagged the groceries. Customers then took them to a central cashier area to pay.

The technology was heralded as a “revolution in the supermarket.” Shoppers “turn into their own grocery clerks as automated checkout machines shorten those long lines of carts and reduce markets’ personnel costs,” the Los Angeles Times said in a 1987 review.

But self-checkout did not revolutionize the grocery store. Many customers balked at having to do more work in exchange for benefits that weren’t entirely clear.

It took a decade for Walmart to test self-checkout. Only in the early 2000s did the trend pick up more widely at supermarkets, which were looking to cut costs during the 2001 recession and faced stiff competition from emergent superstores and warehouse clubs.

“The rationale was economics-based, and not focused on the customer,” Charlebois said. “From the get go, customers detested them.”

A 2003 Nielsen survey found that 52% of shoppers considered self-checkout lanes to be “okay,” while 16% said they were “frustrating.” Thirty-two percent of shoppers called them “great.”

The mixed response led some grocery chains, including Costco, Albertsons, and others, to pull out the self-checkout machines they had installed in the mid-2000s.

“Self-checkout lines get clogged as the customers needed to wait for store staff to assist with problems with bar codes, coupons, payment problems and other issues that invariably arise with many transactions,” grocery chain Big Y said in 2011 when it removed its machines.

The move to self-checkout has created unintended consequences for stores as well.

Retailers found that self-checkout stations were not autonomous and required regular maintenance and supervision, said Christopher Andrews, a sociologist at Drew University and author of “The Overworked Consumer: Self-Checkouts, Supermarkets and the Do-It-Yourself Economy.”

Although self-checkout counters eliminated some of the tasks of traditional cashiers, they still needed to be staffed and created a need for higher-wage IT jobs, he said.

Self-checkout, Andrews added, “delivers none of what it promises.”

In the biggest headache for store owners, self-checkout leads to more losses due to error or theft than traditional cashiers.

“If you had a retail store where 50% of transactions were through self-checkout, losses would be 77% higher” than average, according to Adrian Beck, an emeritus professor at the University of Leicester in the UK who studies retail losses.

Some products have multiple barcodes or barcodes that don’t scan properly. Produce, including fruit and meat, typically needs to be weighed and manually entered into the system using a code. Customers may type in the wrong code by accident. Other times shoppers won’t hear the “beep” confirming an item has been scanned properly.

“Consumers are not very good at scanning reliably,” Beck said. “Why should they be? They’re not trained.”

Other customers take advantage of the lax oversight at self-checkout aisles and have developed techniques for stealing. Common tactics include not scanning an item, swapping a cheaper item (bananas) for a more expensive one (steak), scanning counterfeit barcodes attached to their wrists or properly scanning everything and then walking out without paying.

Self-checkout is here to stay

Despite self-checkout’s many shortcomings for customers and store owners, the trend is only growing.

Walmart, Kroger, and Dollar General are piloting exclusively self-checkout stores. Costco and Albertsons have brought self-checkout back after removing it years ago. Amazon has taken the concept a step further with cashier-less Amazon Go stores.

It may simply be too late for stores to turn their back on self-checkout.

Stores today are catering to shoppers who perceive self-checkout to be faster than traditional cashiers, even though there’s little evidence to support that. But, because customers are doing the work, rather than waiting in line, the experience can feel like it’s moving more quickly.

Store owners have also seen competitors installing self-checkout and determined they don’t want to miss out.

“It’s an arms race. If everyone else is doing it, you look like an idiot if you don’t have it,” said David D’Arezzo, a former executive at Dollar General, Wegmans and other retailers. “Once you let it out of the bag, it’s pretty difficult not to offer it anymore.”

Covid-19 has also hastened the spread of self-checkout.

During the pandemic, many customers opted for self-service to avoid close interactions with cashiers and baggers. And challenges hiring and retaining workers have led stores to rely on the machines more heavily to get customers through the door.