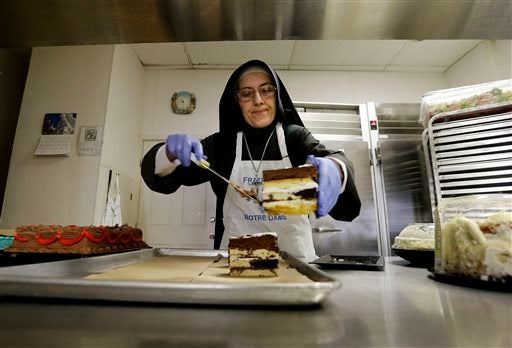 SAN FRANCISCO (AP) – Sister Mary Benedicte wants to focus on feeding the hungry lined up outside a soup kitchen in a gritty part of San Francisco.

But the city’s booming economy means even seedy neighborhoods are demanding higher rents, threatening to force out an order of nuns who serve the homeless.

The sisters of Fraternite Notre Dame’s Mary of Nazareth House said Tuesday that they can’t afford a monthly rent increase of more than 50 percent, from $3,465 to $5,500, and they have asked their landlord for more time to find a cheaper place to serve the poor.

“Everywhere the rent is very high, and many places don’t want a soup kitchen in their place,” said Sister Mary Benedicte on Tuesday, in her French-accented English. “It’s very, very hard to find a place for a soup kitchen where people can feel welcome and where we can set up a kitchen for a reasonable price.”

Since 2008, the modest kitchen has sat on a derelict street in the Tenderloin neighborhood, long associated with homelessness and drug use. But it’s also within walking distance of a revitalizing middle Market Street area, led by the relocation of Twitter in 2012.

Brad Lagomarsino, an executive vice president with commercial real estate company Colliers International, said that since 2010 there’s been a “dramatic increase” in residential and retail rents in the middle Market area, leading to spillover increases in the Tenderloin.

The still-seedy neighborhood, in other words, is trending up.

Sister Mary Benedicte and Sister Mary of the Angels sleep in the back of the storefront and in the evenings, they bake pastries – French tarts and cookies – to sell at a local farmer’s market to supplement their income.

The two sisters feed lunch to about 300 people three times a week. They offer dinner twice a week, using donated food and cash to dish up warm meals.

With help from a small number of volunteers, they served a lunch of vegetables and sausage, creole rice and cake on Tuesday.

“We not only feed them, we try to love them,” Sister Mary Benedicte said. “Poor people, what’s very hard for them is to be alone on the street. Some of them say the hardest part of living on the street is that nobody wants to speak with them.”

A lawyer for the landlord said by email Tuesday that “no eviction is going forward” and the owner will meet with the nuns when he returns from India this week. The nuns also have a lawyer, who is working their case for free.

Faith-based organizations throughout the city are struggling to pay rent while providing social services to the needy, said Michael Pappas, executive director of the San Francisco Interfaith Council.

Some are renegotiating leases while others have had to cut back on office space or raise money to rehabilitate new property.

This isn’t the San Francisco he knows.

“We were always looked upon as the pioneers in philanthropy,” he said, “and I just think the forces of the economy are challenging us right now.”