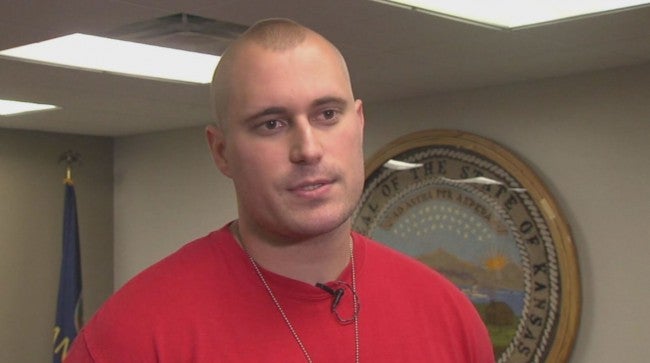 ROELAND PARK, Kansas (CNN) – A Kansas police officer is getting national attention for what he did for a woman caught stealing from a Wal-Mart.

The first thing Officer Mark Engravalle noticed was that Sarah Robinson was crying. Her little girls’ feet were covered in dirt.

“Being a father myself it obviously pulled at my heart,” Officer Engravalle, with the Roeland Park Police Department, said.

Robinson told him she and her six kids had been living in her car and occasionally renting a one bedroom room in a stranger’s home since her husband died unexpectedly a few years ago.

“We got everything else taken from us and it’s just hard right now,” Robinson said.

Moments later, Officer Engravalle went back into the Wal-Mart to buy diapers, wipes and a pair of shoes for each of Robinson’s children.

“We were both in tears,” Engravalle said. “So it was more of a mutual understanding. She said, ‘Thank you,’ but the look on her children’s faces with shoes was all that had to be said.”

“He did something that will never be forgotten,” Robinson said. “He helped us when nobody else will.”

Robinson says she’s embarrassed by her actions, but she’d run out of people to ask for help and feared she’d lose her lifeline: her daughters.

“Every morning I get up and keep breathing for them,” Robinson said. “I could take the easy way out and send them to live with my mom but I’m not going to do that. They’re the reason I live.”

“What she did was wrong, but I think her heart was in the right place – wanting to take care of her children,” Engravalle said.

He did give Robinson a ticket for shoplifting, but she says, she’s grateful that he didn’t arrest her.