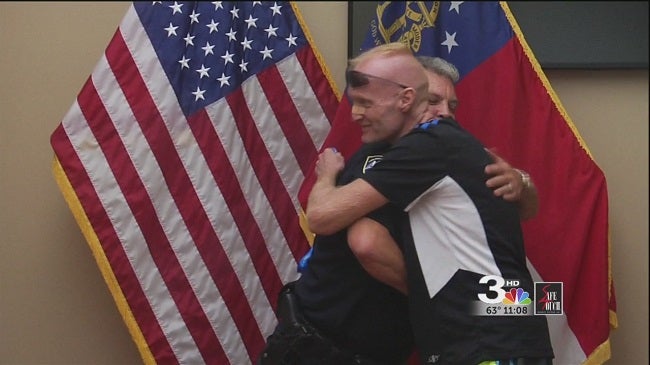 Two days later, the runner and officer reunited to share their story of one man’s will to reach a goal and another’s willingness to help him do just that.

“I wasn’t going to go that far and stop there I was going to keep on, I didn’t have that much further I was going to try and do it,” says Hinesville resident Robert McCoy.

Right before the final turn at this years Rock ‘n’ Roll half marathon, McCoy fell hitting the ground face first. Dehydrated and bleeding, he was more worried about finishing the race.

“Hearing his plea to finish the race, I knew had to help and the only thing I knew I could do was support him to the finish line and that’s what I did,” says SCMPD Sgt. John Cain who was stationed as assistant commander along Anderson street that marked the final turn before the finish line.

It’s an act of support Sgt. Cain offered to McCoy that has gone viral, but the story goes much deeper in why McCoy wanted so badly to finish.

“Kept thinking of my dad, I can’t just keep laying on the ground I have to get up, ‘get up’ cause I wanted to win, or not win but finish the race for him and everything,” says McCoy.

McCoy lost his father to cancer this past April. Surviving his own bout with cancer motivated McCoy to pick up running. He says after hitting the ground all he could think of was to get up for his father and it was a message the sergeant felt.

“His drive to want to finish the race caused me to want to be right beside him and go the distance,” says Cain.

Now it’s a finish that is picking up a positive image of local law enforcement around the nation that the sergeant says he is proud to be a part of.

Cain and McCoy reunite for thank yous they were unable to give during the race. Cain says receiving McCoy’s medal is a humbling experience and a symbol of something now he cherishes even more.

“Going to that finish line is a friendship that is unspoken but yet truly exists,” says Cain.

McCoy says it’s back to training as he plans to run another race this upcoming weekend.