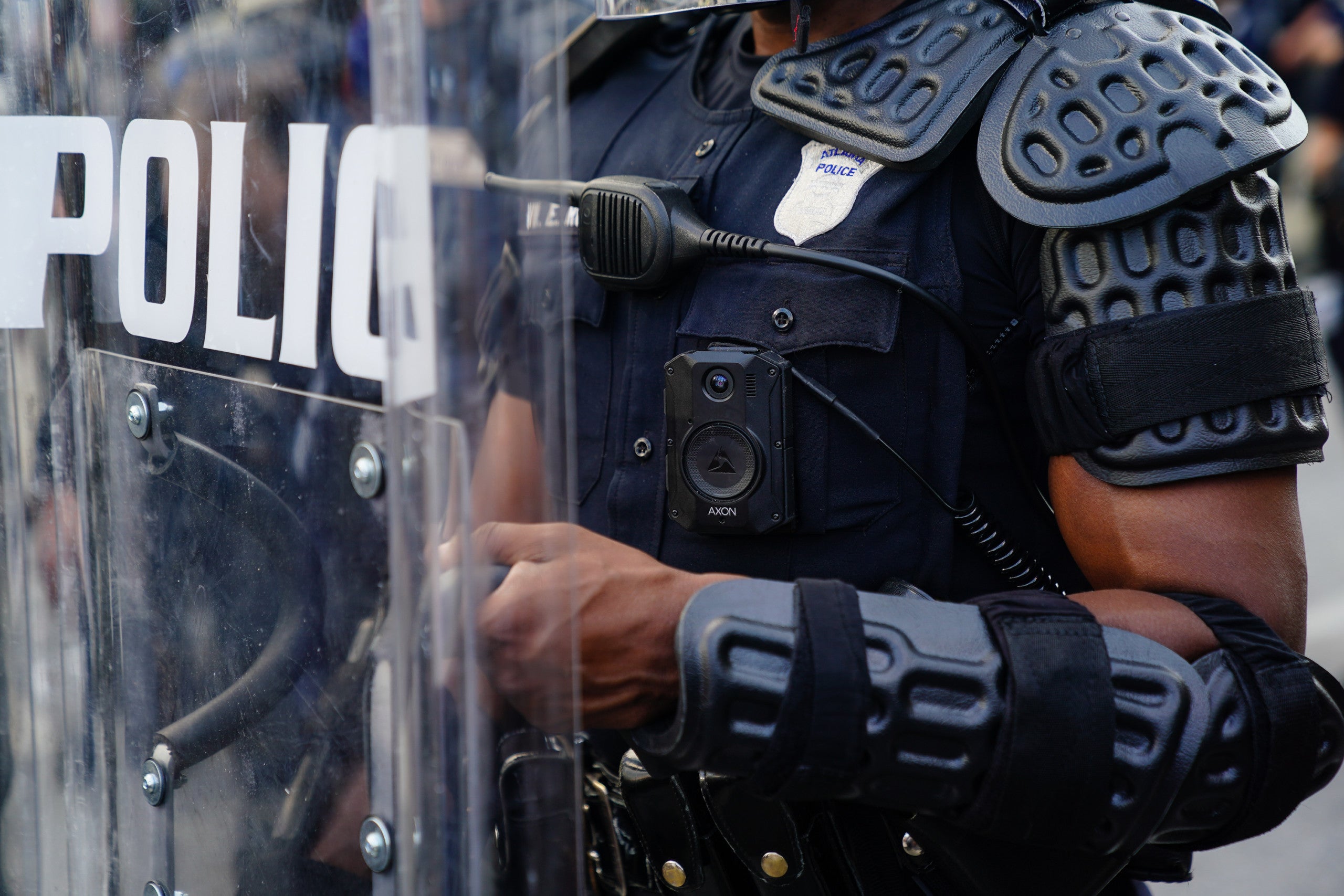 ATLANTA, GA - MAY 31: A police officer wearing a body cam is seen during a demonstration on May 31, 2020 in Atlanta, Georgia. Across the country, protests have erupted following the recent death of George Floyd while in police custody in Minneapolis, Minnesota. (Photo by Elijah Nouvelage/Getty Images)
by: Ryan Young, Nick Valencia and Devon M. Sayers, CNN
Posted: Jun 18, 2020 / 03:51 PM EST / Updated: Jun 18, 2020 / 03:53 PM EST

(CNN) — In Atlanta, where police are under intense scrutiny after two white officers were involved in the killing of a 27-year-old black man, some members of the force say their morale has taken a massive hit and they feel abandoned by city officials.

Rayshard Brooks was fatally shot last week outside a Wendy’s restaurant after failing a sobriety test, fighting with two officers, taking a Taser from one and running away. Video from the scene appears to show Brooks pointing the Taser at an officer before he is shot.

Police had originally responded to a 911 call about Brooks sleeping in his car in the restaurant’s drive-thru lane. Officer Garrett Rolfe was fired after footage showed him shooting multiple times as Brooks ran. Brooks was shot twice in the back. A second officer, Devin Brosnan, was placed on administrative duty.

In announcing the charges, Fulton County District Attorney Paul Howard Jr. said that Atlanta police policy was not followed in the attempted arrest and shooting of Brooks because the officers did not immediately inform Brooks of the reason for his arrest and did not render timely medical assistance to him.

Hours after the charges were announced, Atlanta police officers were not responding to calls in three of the department’s six zones, multiple sources within the Atlanta Police Department told CNN on Wednesday evening.

“There’s a lot happening in our cities and our police officers are receiving the brunt of it, quite frankly,” Mayor Keisha Lance Bottoms told CNN’s Chris Cuomo on Wednesday.

She said the city has committed to the officers through a pay raise, and “we expect that our officers will keep their commitment to our communities.”

Bottoms also said she thinks police morale is down “tenfold.”

In a statement on Twitter Wednesday, the police department said: “Earlier suggestions that multiple officers from each zone had walked off the job were inaccurate. The department is experiencing a higher than usual number of call outs with the incoming shift. We have enough resources to maintain operations & remain able to respond to incidents.”

On Monday, the mayor had announced administrative orders changing the use-of-force policy for the department saying “we hope that this will be a framework in Atlanta and possibly the nation.”

Brooks’ death followed days of protests in cities across the US and mounting calls for far-reaching reform of the nation’s police departments after the May 25 killing of George Floyd by police in Minneapolis, Minnesota. As calls for reform, defunding or even the dismantling of police departments grew louder, some cities reported that officers were choosing to quit.

In Los Angeles. officers told CNN this week that morale among the rank-and-file is at one of its lowest points in decades. One veteran LAPD supervisor said morale in the department — the third largest city police force in the country — is the worst he’s seen it since the aftermath of the 1992 riots.

On Tuesday, the New York Police Department commissioner sent an email to uniformed members saying they will have to fight crime differently — and do it with fewer street stops, according to a letter CNN obtained from a senior law enforcement official.

“In the current climate, we have to fight crime differently. We will do it with less street-stops — perhaps exposing you to less danger and liability — while better utilizing data, intelligence, and all the technology at our disposal,” Commissioner Dermot Shea wrote.

Tuesday’s email came as data from the department showed homicide, burglary, grand larceny and auto crimes in the city have spiked this year and seen a dramatic uptick in past month — after calming briefly while the city was shutdown as a result of the coronavirus pandemic.

“To say we’re in a very difficult position is an understatement,” Shea wrote.

CNN spoke to a dozen officers in Atlanta, many of whom who said they felt let down by city officials and predicted some would simply choose to walk away from their jobs — which law enforcement advocates point out are often demanding and sometimes dangerous.

The Atlanta Police Foundation reported this week that 8 officers had decided to leave the force since June 1.

Officers ‘not taught to disengage’

The Atlanta police force has over 2,000 sworn officers. CNN spoke to officers ranging in rank from detectives to sergeants and lieutenants.

They included men and women and African American as well as white officers. All asked not to be named because of possible repercussions from the department.

“The morale is the lowest it’s been in 18 years. This is because of the mayor and DA. The disciplinary policy is not being followed, the officers’ actions are not being properly investigated. Instead the mayor terminates them,” said one officer.

A veteran of the force, who is African American and works in one of the most violent areas of Atlanta, said that the actions of the officer who fired the shots that killed Brooks were “justified.”

“(The police officer) did exactly what he was supposed to do. Mr. Brooks escalated the situation,” the officer said.

Brooks ‘shouldn’t have lost his life’

One officer said it was a tough roll call Monday because officers have questions about what they should do when confronted with a suspect who is willing to fight them.

“Officers are not taught to disengage. Unfortunately yes, you can be shot in the back as you are turning around,” one officer said

Referring to Brooks’ failing a sobriety test, one 15-year veteran of the force asked: “If the officer let Mr. Brooks go, and he runs a light at the next intersection and kills someone, who would have been at fault? The officer?”

When pressed to respond to Brooks’ supporters who say that he should not have died that night, the officer said he wanted to be clear on that point.

“Mr. Brooks shouldn’t have lost his life. I would have maybe handled it differently. But that’s the thing, if you give one incident, and put 10 or 20 officers in that scenario, you will get 20 different ways that it’s handled.”

The Atlanta Police Department declined to respond to request for comment on morale within the force.

‘It’s going to be hard to recruit’

“Until last week, I was proud to tell everyone that I met that I work for the Atlanta Police Department. Unfortunately, that changed,” one longtime officer said.

“There is going to be a mass exodus. It’s going to be hard to recruit with the way they’re treating the officers right now. Why would anyone sign up for this job?”

One member of the department said in the future the average Atlanta officer will be younger than they are now as some veterans choose to leave, adding that new recruits may not have the experience the job requires.

“The department is going to get younger … you can have all the training in the world, but until you get punched in the face you won’t know what you’re going to do.”

One officer lamented the resignation of Police Chief Erika Shields.

“A beloved and honorable chief was shoved aside. A chief that believed in positive police relations within all communities. A chief that truly knew the meaning of compassion, honor and leadership.” the officer said.

‘One bullet away from dying’

Vince Champion, the southeast regional director of the International Brotherhood of Police Officers, said the fallout from Brooks’ death, along with the charging of six Atlanta officers after they allegedly used excessive force in the May arrest of two students, have had a negative impact on the department.

“(The officers) don’t know how to do their job now because if they do their job and they do what they’re trained, and they … do what their policies and procedure say, it doesn’t matter, because if the mayor doesn’t like the way it looks, she fires. If the district attorney doesn’t like the way it looks, he charges,” said Champion.

One member of the city’s police force put the situation in the starkest terms.

“We are one bullet away from dying and one mistake away from an indictment,” the officer said.

“Why risk it? I can go be a manager at QuikTrip and make just about as much money, without the stress. Atlanta government has turned their backs on the Atlanta Police Department.”