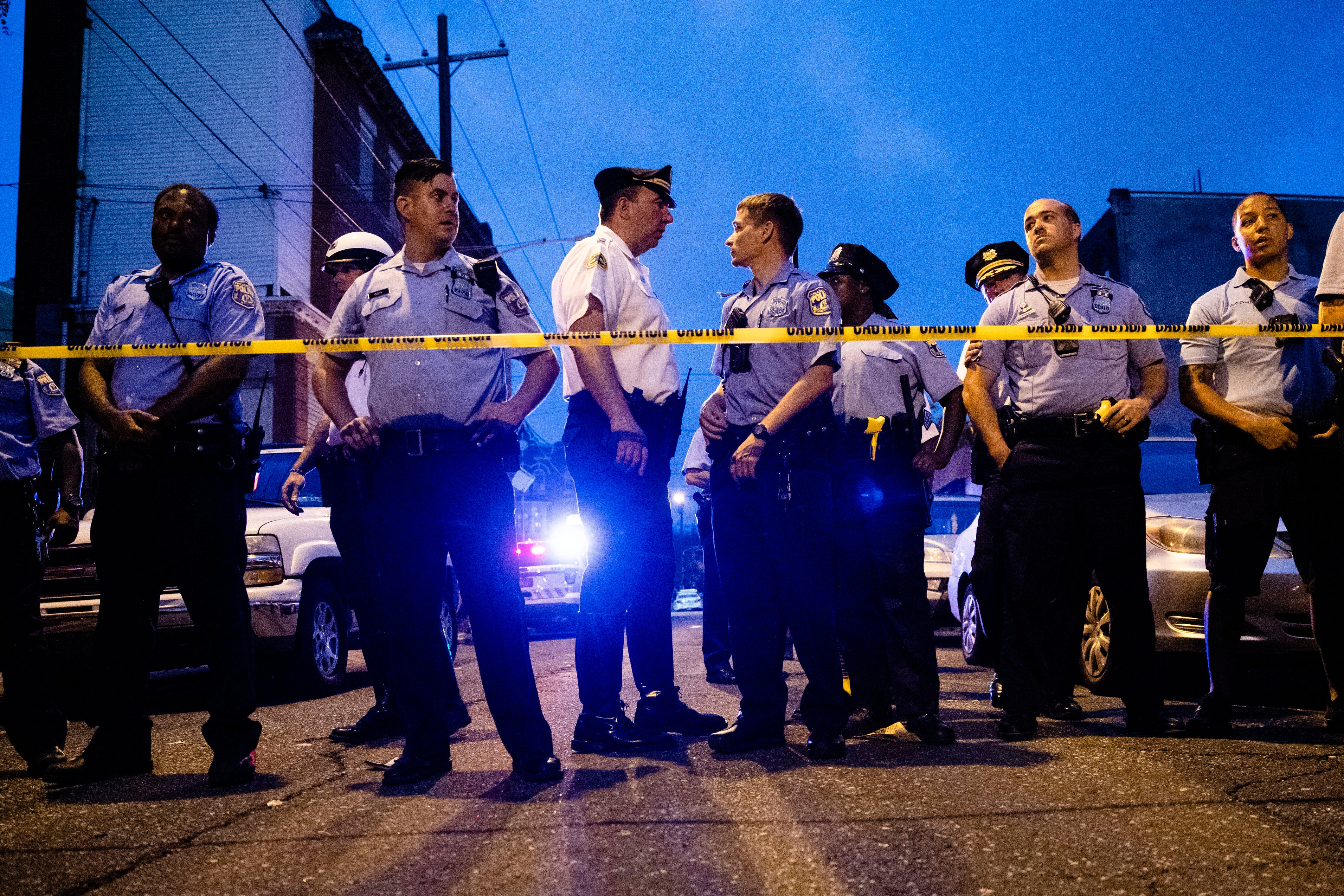 PHILADELPHIA (AP) — The Latest on the standoff in Philadelphia that injured six police officers (all times local):

Krasner told reporters Thursday that Maurice Hill has not yet been charged, but he will likely face attempted murder and other charges.

He credited police with ending the standoff Wednesday night. He called it “brilliant policing and maybe a little bit of a miracle.”

Philadelphia District Attorney Larry Krasner says the suspected gunman in an hourslong standoff that left six police wounded “should not have been on the streets.”

But he added that law enforcement officials did not have a “crystal ball” to predict his behavior.

Krasner told reporters Thursday that Maurice Hill has not yet been charged, but he will face “more than enough charges, so Mr. Maurice Hill may never exit jail.”

Krasner said Hill has an extensive criminal history, including having faced drugs, guns, and robbery charges.

The lawyer representing the suspected gunman who opened fire on police officers in Philadelphia says his client called him during the standoff asking for help surrendering.

Shaka Johnson tells WPVI-TV on Thursday that Maurice Hill called him around 8:30 p.m. on Wednesday saying he was barricaded in a house and wanted to come out. Johnson says he arranged a phone call with Philadelphia District Attorney Larry Krasner, Police Commissioner Richard Ross, him and Hill.

He says Hill has a newborn daughter and a teenage son, and he wanted to see his children again.

Johnson praised police for their handling of the situation.

Six officers were wounded. They’ve been treated and released from hospitals.

Ross tells the news site that he appreciated the attorney’s help, but it was ultimately the tear gas that ended the ordeal.

A law enforcement official has identified the suspected gunman who wounded six police officers in Philadelphia during an hourslong standoff.

The official says the suspect is 36-year-old Maurice Hill, who has a criminal history that included firearms charges. The official wasn’t authorized to discuss the matter publicly and spoke to The Associated Press on condition of anonymity.

During the standoff, the gunman told the police commissioner who was trying to negotiate his surrender that he had an extensive criminal record.

The six officers who were wounded were treated and released from hospitals.

Philadelphia’s police commissioner says he’s surprised the gunman who wounded six officers surrendered after he barricaded himself in a home for hours.

Richard Ross says the gunman mentioned he had an extensive criminal history as he tried to negotiate his surrender on a cellphone.

The commissioner says he does not believe the gunman knew two police officers were trapped upstairs in the home along with three civilians.

He says the tear gas ultimately caused the gunman to come out early Thursday. The gunman was taken to a hospital for evaluation and then placed into custody.

His name has not been released.

The shooting started Wednesday when gunfire erupted in the home as officers were serving a narcotics warrant.

The six officers who were shot have been released from hospitals.

Authorities say a gunman who barricaded himself for hours inside a Philadelphia home, shooting at and wounding six officers, is in police custody.

Philadelphia police Sgt. Eric Gripp said early Thursday morning that the man was taken in custody after an hourslong standoff with police.

The shooting started around 4:30 p.m. Wednesday. Officers were serving a narcotics warrant at a home and had already entered when gunfire erupted. The gunman and police exchanged gunfire for hours.

Six officers were shot, but have been released from hospitals. Two officers had been trapped in the house during the standoff but were safely evacuated.

A heavy police presence was in the neighborhood for hours with businesses, including day care centers, on lockdown and roads closed.