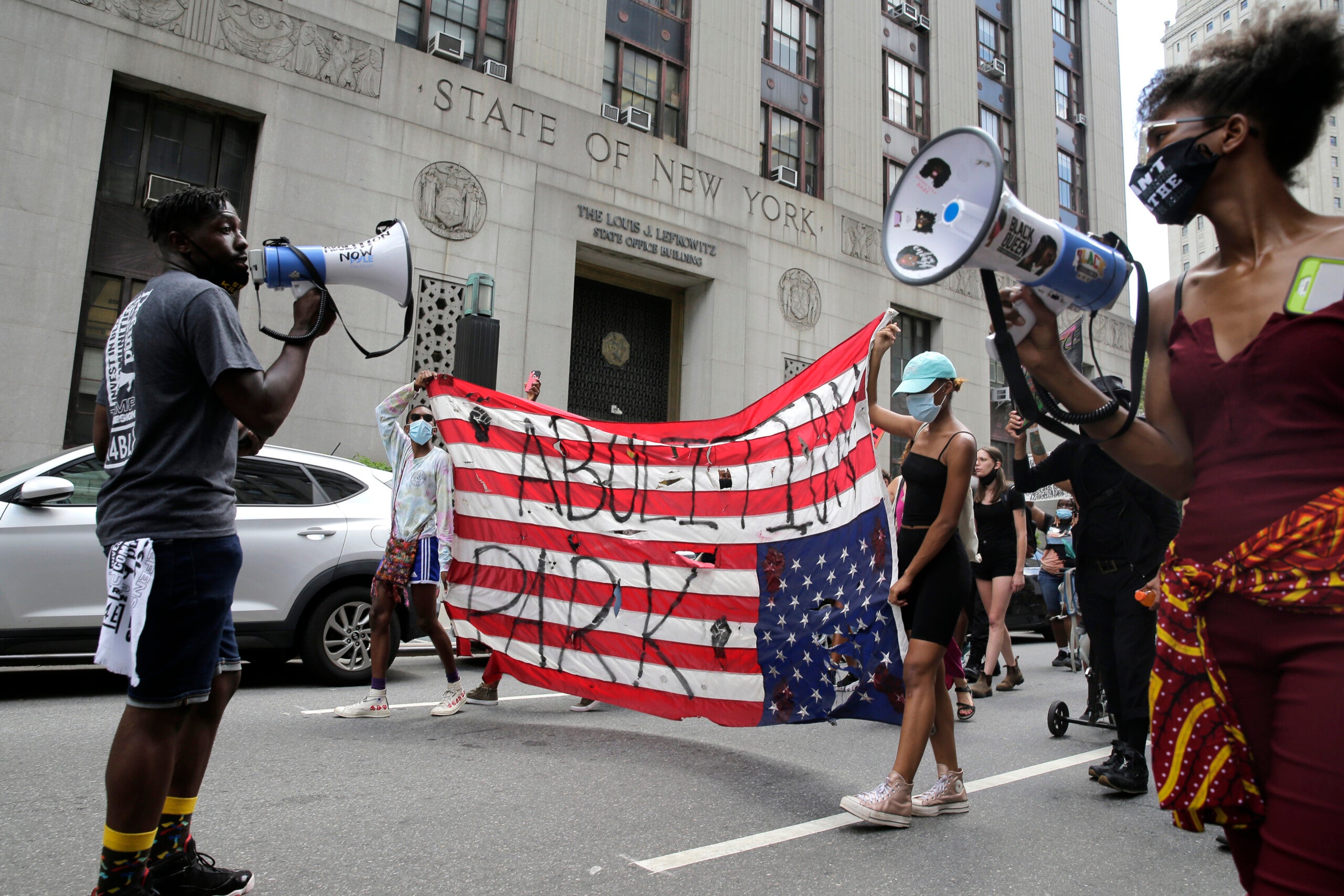 NEW YORK (AP) — The New York Police Department’s use of plainclothes officers and an unmarked minivan to haul away a vandalism suspect during a protest Tuesday created confusion and drew outrage from people who compared it to covert tactics used recently by federal agents in Portland, Oregon.

Bystander video of 18-year-old Nikki Stone’s arrest spread quickly on social media, along with comments such as “nypd is out here KIDNAPPING protesters off of the street.” Another tweet compared the police to an African terrorist group, saying: “When Boko Haram does this there is international outrage. NYPD, it’s just business as usual.”

Acknowledging the video, the NYPD issued a statement Tuesday night explaining that Stone was picked up by a police warrant squad for allegedly damaging several surveillance cameras near City Hall, where activists camped out for a month before riot police forced them out last week.

The warrant squad typically “uses unmarked vehicles to effectively locate wanted suspects,” the statement said. Police also claimed the officers were peppered with rocks and bottles as they took Stone into custody, but witnesses said that wasn’t the case.

Mayor Bill de Blasio said Wednesday he was concerned with the optics of police hustling a person into a minivan during the middle of a protest march, given the recent furor over federal agents using unmarked vehicles to scoop up protesters in Portland. He said he would discuss the matter with Police Commissioner Dermot Shea, himself a target of protesters making noise and shining lights early Wednesday outside a home address listed for him.

“That was not the time and place to effectuate that arrest,” de Blasio said.

Gov. Andrew Cuomo echoed those concerns, saying he initially thought the arresting officers were federal agents because of the similarity to what happened in Portland. He said using such surreptitious tactics, in the wake of the police killing of George Floyd in Minneapolis and calls for police reform, only erodes public trust.

“I’m surprised especially at this time, the NYPD would take such an obnoxious action,” Cuomo said. “It was wholly insensitive to everything that’s going on. It was frightening. And to me it’s emblematic of the larger problem.”

Video of Tuesday’s arrest at a 24-hour demonstration in Manhattan showed officers in T-shirts and shorts just after they put Stone into the minivan. Uniformed bike cops are seen forming a perimeter and standing guard as the plainclothes officers — their department-issued guns and stun guns visible on their holsters — work around the vehicle. The clip was shared thousands of times, including by politicians and cable news commentators.

Stone, identified by friends as a transgender activist who has been experiencing homelessness, was released from a police precinct around 1 a.m. Wednesday and ordered to return to court at a later date to face charges of criminal mischief and making graffiti stemming from five alleged incidents over the last two months.

The Associated Press wasn’t immediately able to locate a phone number where Stone could be reached. A message was left with a person organizing an online fundraiser on Stone’s behalf.

Eleven other people at Tuesday’s protest in Manhattan were also arrested and given desk appearance tickets for charges including criminal mischief and obstructing governmental administration, police said.

The American Civil Liberties Union tweeted that it appeared Stone was “abducted” off the street. U.S. Rep. Jerry Nadler, a Democrat, said the episode was “terrifying and should be unacceptable to everyone who respects the constitutional rights this country was founded on.”

U.S. Rep. Alexandria Ocasio-Cortez, a Democrat who made headlines last week for castigating a sexist colleague, tweeted: “This is not a drill. There is no excuse for snatching women off the street and throwing them into unmarked vans.”

In Portland, federal agents were accused of failing to properly identify themselves as they took people into custody, allegedly without probable cause. Those people were questioned and released.

“A lot of us have watched in pain what’s been going in in Portland, Oregon,” de Blasio said. “Anything that even slightly suggests that to me is troubling and it’s the kind of thing we don’t want to see in our city.”

The Police Benevolent Association, the union representing the city’s police officers, tweeted that “politicians hurling hate at cops for daring to arrest a wanted criminal … have surrendered our streets.” City Councilman Joe Borelli, a supporter of the police department, tweeted approval of the plainclothes tactics and derision for people upset by it.

“So excited to hear today’s hot takes on how someone shouldn’t be arrested despite having an arrest warrant, or should have been arrested in some other manner or by more fashion-conscious cops, or how police unmarked minivans are evil or something,” Borelli, a Republican, wrote.