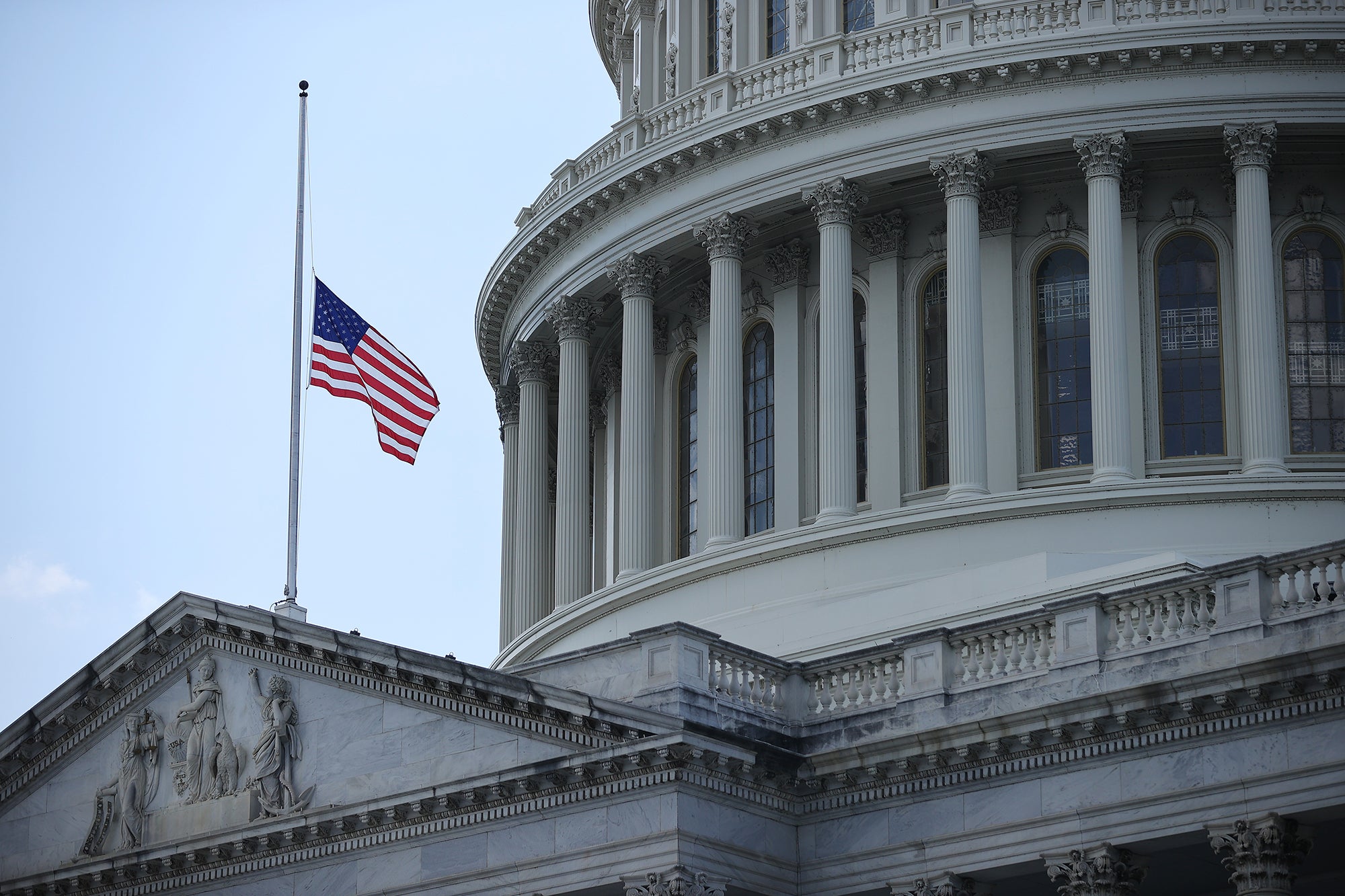 WASHINGTON, DC - JULY 27: The flag flies at half-staff in honor of Rep. John Lewis (D-GA) outside the U.S. Capitol where he will lie in state July 27, 2020 in Washington, DC. Called 'the conscience of the U.S. Congress,' Lewis was a civil rights pioneer, contemporary of Dr. Martin Luther King, Jr. and helped to organize and address the historic March on Washington in August 1963. Lewis served Georgia's fifth congressional district from 1987 until his death on July 17. (Photo by Chip Somodevilla/Getty Images)
by: By Alex Rogers, CNN
Posted: Apr 2, 2021 / 05:37 PM EST / Updated: Apr 2, 2021 / 05:37 PM EST

(CNN) — House Speaker Nancy Pelosi ordered the flags at the US Capitol to be flown at half-staff on Friday in honor of US Capitol Police Officer William “Billy” Evans, who died after a suspect rammed a vehicle into a police barricade outside the Capitol building. Another officer has been injured.

“Today, America’s heart has been broken by the tragic and heroic death of one of our Capitol Police heroes: Officer William Evans,” said Pelosi. “He is a martyr for our democracy.”

USCP acting chief Yogananda Pittman said the suspect crashed a car into a barrier outside the Capitol, “did not respond to verbal commands,” and then started “lunging” toward the officers, who fired upon and killed him. The suspect has been identified as Noah Green, according to federal and local law enforcement sources.

Members of Congress honored the officers who served in the line of duty.

“I’m heartbroken for the family and loved ones of U.S. Capitol Police Officer William Evans who was killed today defending our Capitol. And I’m am praying for the other injured USCP officer and his family. We are in their debt,” Senate Majority Leader Chuck Schumer said in a statement. “We thank the Capitol Police, National Guard, and first responders for all they do to protect those who work at and visit the Capitol.”

“Once again, brave officers of the United States Capitol Police have been violently attacked while simply doing their job,” Senate Minority Leader Mitch McConnell said in a statement. “I am heartbroken that Officer William F. Evans was killed in the line of duty defending the Capitol. His name will go down in history for his selfless sacrifice.”

House Minority Leader Kevin McCarthy also called Evans’ death “tragic and heartbreaking” in a statement. “Today, he responded quickly and bravely to a senseless attack. His heroic actions helped protect the Capitol and saved many lives. His service and heroism will always be remembered, and should be honored.”

The attack comes just months after the insurrection at the Capitol on January 6, when one Capitol Police officer, Brian Sicknick, was killed. Two other officers involved in that response have since died by suicide, and dozens of other officers were injured.

Barbed wire fencing surrounding the Capitol complex has since been taken down, and thousands of National Guard troops have returned home. But thousands still remain due to lingering security concerns.

“I ask you to please keep the United States Capitol Police family in your thoughts and prayers at this time,” Pittman said. “It has been an extremely difficult and challenging year for us, but we will get through this.”