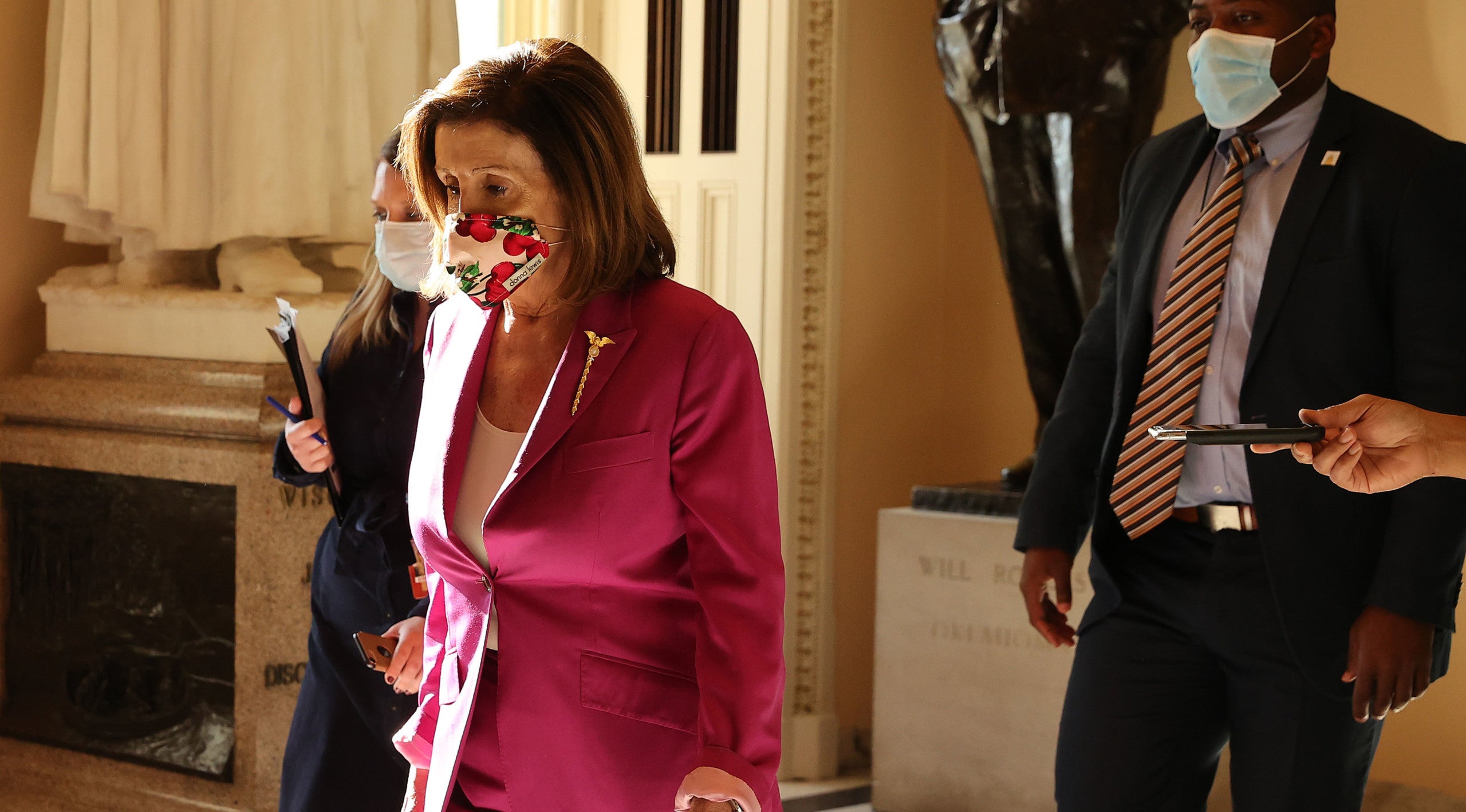 Speaker of the House Nancy Pelosi is accompanied by staff, security and press she walks through the U.S. Capitol before a series of votes on a $3 trillion economic package to aid for those affected by the novel coronavirus pandemic May 15, 2020 in Washington. (Chip Somodevilla/Getty Images)
by: Nicky Robertson, CNN
Posted: Jun 28, 2020 / 10:41 AM EST / Updated: Jun 28, 2020 / 10:41 AM EST

(CNN) — House Speaker Nancy Pelosi said Sunday that she believes a federal mandate on mask wearing is “long overdue” as cases across the country spike from the coronavirus pandemic.

In an interview on ABC’s “This Week,” Pelosi, who could be seen with a mask on her neck, urged President Donald Trump to wear a mask. “The President should be example, real men wear masks, be an example to the country, and wear the mask,” she said.

Pelosi said that the Centers for Disease Control and Prevention did not require mask wearing, and instead only recommend coverings, because the department did not want to “offend the President.”

The CDC recommends that everyone “should wear a cloth face cover when they have to go out in public” to reduce transmission and slow the spread of the coronavirus, which is highly contagious.

Despite the advice from public health experts, Trump continues to defy health recommendations and has been reluctant to be seen wearing a mask in public. The White House maintains that everyone who comes in contact with the President is tested for coronavirus regularly.

Vice President Mike Pence said that people should listen to state and local officials on wearing masks in public.

In a clip from an interview airing Sunday on CBS’ “Face the Nation,” Pence said, “President Trump and I, after asking the American people to embrace 45 days to slow the spread, we issued guidelines to reopen America and since that day, nearly two months ago, we’ve made it clear that we want to defer to governors, we want to defer to local officials and people should listen to them.”

Pence praised the American principle of federalism, and said “every state has a unique situation.”

Pence also said in the interview that “we believe people should wear masks wherever social distancing is not possible,” and where authorities have said it is necessary. He added that he himself has worn a mask on “several occasions this week,” and that the President has worn a mask before.

Presumptive Democratic nominee Joe Biden said last week that he would make wearing face masks mandatory for Americans during the pandemic, furthering himself on the issue from Trump who has stressed that masks are voluntary and has flouted public health recommendations.

“The one thing we do know is these masks make a gigantic difference. I would insist that everybody out in public be wearing that mask. Anyone to reopen would have to make sure that they walked into a business that had masks,” Biden told CNN’s affiliate in Pittsburgh, KDKA, while wearing a black mask.

Pressed if he’d use federal power to mandate wearing a mask in public, Biden responded, “Yes, I would. From an executive standpoint, yes I would.”

Dr. Christopher Murray, director of the Institute for Health Metrics and Evaluation, has said that “people need to know that wearing masks can reduce transmission of the virus by as much as 50%, and those who refuse are putting their lives, their families, their friends, and their communities at risk.”

There are just a few groups of people who shouldn’t wear cloth masks, including children under 2 years old and people who have breathing problems, according to the Mayo Clinic.