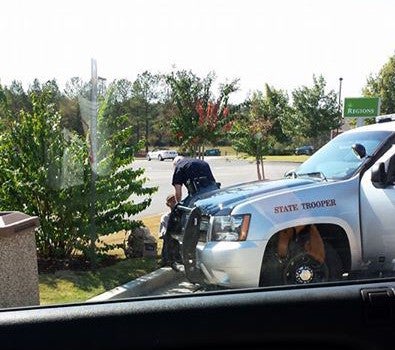 BESSEMER, Ala. (WIAT) – A picture of an Alabama state trooper is going viral for all the right reasons. It was captured by an Alabaster woman who saw him doing a good deed and decided to share it.

Jenny Reed was at the McDonald’s on Morgan Road in Bessemer, when she spotted Trooper Justin O’Neal, waiting ahead of her in the drive thru window. She saw the cruiser pull into a parking spot, then saw O’Neal get out.

“He got out of his car and walked over to the right passenger seat in the back and let a homeless man out,” said Reed.

Reed didn’t know it, but the man was disabled. He had been walking along I-459 from Tuscaloosa, hoping to make it to North Carolina, where he has relatives. That’s where Trooper O’Neal found him. The man told O’Neal he had not eaten in three days. O’Neal picked him up, then took him to the restaurant.

“The state trooper was carrying the McDonald’s bag and the drink. He helped him to a curb where he sat, and he handed him his food,” Reed said.

“He was very happy. He really wasn’t looking at me. He was looking at that bag of McDonalds,” said O’Neal.

Reed snapped a picture, then approached O’Neal to thank him for helping the man. In just a few days, her photo has gone viral on Facebook. O’Neal says he does not want the focus to be on him, but a reminder of the good law enforcement does.

“Law enforcement, police officers, all across the country, do this on a daily basis,” he said.

This time, thanks to Reed, everyone can see it.

“It made me a little emotional. I felt like I had been blessed just to be able to witness it,” she said.

For O’Neal, it’s just another day on the job, one he feels proud to do.

“Law enforcement’s just a calling. You’re called to do the job, and it’s in my blood,” he said.