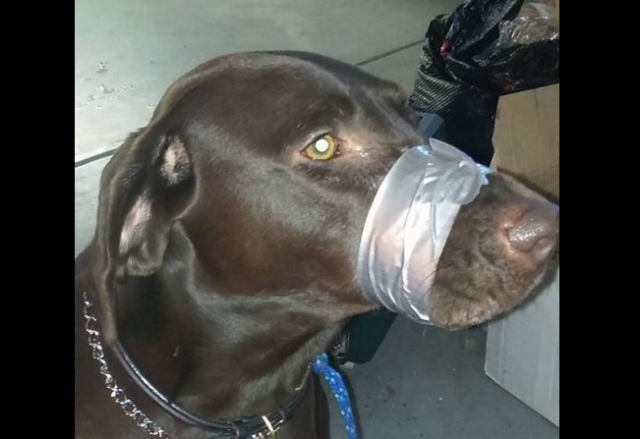 AVON, Conn. (WTNH) – Police in Connecticut and Florida are investigating after a woman allegedly duct taped her dog’s mouth shut and shared the photo to Facebook.

The woman posted a photo of her chocolate lab’s mouth duct taped shut with the caption “This is what happens when you don’t shut up!!!”

In response to the negative feedback on her page, she later wrote, “Dont panic everyone it was only for a minute but hasnt barked since… POINT MADE!!!”

The photo of the dog has since gone viral, shared by thousands of outraged Facebook users. Police in both Connecticut and Florida have also been contacted by people from all over the world. The South Daytona police department has been giving updates on the investigation on their own Facebook page where they posted that they have information that indicates the the dog is OK at this time.

South Daytona police also wrote the incident occurred in the woman’s current location, Avon, and not in South Daytona where her Facebook lists as her location.

There is no word on if police in Connecticut or Florida have spoken with her at this time. The incident is under investigation.

Police ask that you do not flood emergency phone numbers, as this may impact other emergency calls. Both Torrington and South Daytona Police have appointed officers to route callers due to the high influx of calls about the incident.