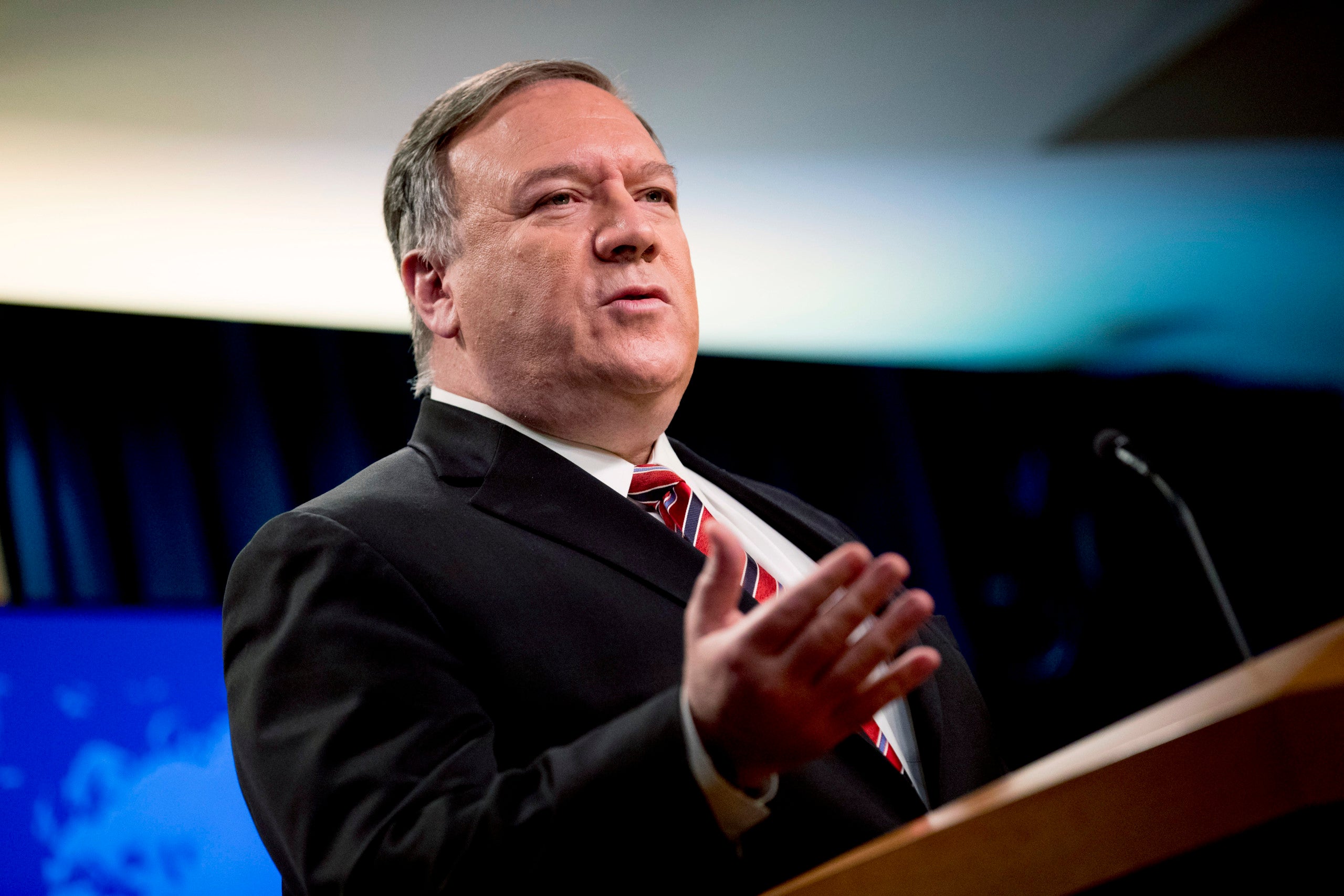 FILE - In this April 29, 2020, file photo Secretary of State Mike Pompeo speaks at a news conference at the State Department in Washington. Chinese leaders “intentionally concealed the severity” of the pandemic from the world in early January, according to a 4-page, Department of Homeland Security report dated May 1 and obtained by The Associated Press. The revelation comes as the Trump administration has intensified its criticism of China, with Pompeo saying Sunday, May 3, that China has been responsible for the spread of disease in the past and must be held accountable for the outbreak of the current pandemic. (AP Photo/Andrew Harnik, File)
by: Kylie Atwood, CNN
Posted: May 22, 2020 / 05:11 AM EST / Updated: May 22, 2020 / 05:11 AM EST

“They seemed to have a game plan and it had to be justified,” said a State Department official who told CNN they had communicated what happened to the State Department’s Office of the Inspector General during an interview late last year, as part of the watchdog’s investigation into Pompeo’s move to fast track the sale.

“The attitude was very Trumpian,” the official added.

Pompeo’s demand meant State Department officials had to reverse engineer the situation to provide the justification for a decision which was made in an aggressive and unconventional manner, the sources said.

The probe into the secretary’s push on the Saudi weapons sale is in the spotlight after President Donald Trump fired State Department inspector general Steve Linick, at Pompeo’s request last week.

House Foreign Affairs Committee Chairman Eliot Engel, a Democrat from New York, said he believes the investigation could be one of the reasons Linick was fired.

Pompeo told reporters on Wednesday that any allegations that his recommendation to fire Linick was retaliatory are “patently false.” None of the sources knew if the IG investigation into the Saudi arms sale spurred Pompeo to recommend the firing of Linick.

At the State Department, the order from Pompeo sent offices scrambling — with the regional office, the political military bureau and the legal office all set into motion to figure out how the emergency could be justified.

During this time there was consternation within the department and at the Pentagon, but sources do not recall a robust interagency debate. The quick decision to use the emergency order did not allow for a thorough discussion about the sale between the various government agencies involved, the State Department sources said.

“It seemed we [the Trump administration] were determined to turn a corner on Khashoggi (referring to the Saudi journalist murdered in Istanbul). The message was we need to move on, and provide the support,” the first State Department official said. “It was an incredible display of audacity.”

“We look forward to continuing to work with Congress to develop prudent measures to advance and protect U.S. national security interests in the region,” a State Department spokesperson said in response to CNN’s request for comment. The spokesperson also referenced comments Pompeo had made about the decision.

The Arms Control Export Act lays out the powers accorded by an emergency declaration in broad terms and gives immense wiggle room to those interpreting it. It says the President can determine “an emergency exists” which requires a sale to be made immediately “in the national security interests of the United States.”

“We can debate the motivation or merits for doing it, but it is not illegal,” explained a second State Department official familiar with the matter.

Traditionally it is the demand for specific arms due to intense and immediate threats — such as those seen during war when you cannot wait 30 days for congressional approval — that trigger the use of the declaration.

For months, lawmakers on both sides of the aisle had blocked arms sales to Saudi Arabia, angered by the enormous civilian casualties the Kingdom and its allies were inflicting in their war in Yemen. The standoff began in June 2018 when Sen. Robert Menendez, the ranking Democratic member on the Senate Foreign Relations committee, put a hold on the sale of certain precision-guided munitions to Saudi Arabia.

Trump defended Saudi Arabia and equivocated about the Prince’s role, essentially saying that the jobs resulting from weapons sales to the Kingdom couldn’t be put in jeopardy.

In May 2019, Pompeo announced that the administration would bypass Congressional review for weapons sales because the arms were necessary to deal with the emergency triggered by Iran’s destabilizing actions in the region.

In a May 24 letter to lawmakers, Pompeo said that he “determined that an emergency exists, which requires the immediate sale of the defense articles and defense services” to Saudi Arabia, the UAE and Jordan “in order to deter further the malign influence of the Government of Iran throughout the Middle East region,” including their support for Houthi rebels in Yemen, according to a copy obtained by CNN. Pompeo also said, in a statement, that a delay in the arms would cause severe harm to the current defense systems the countries had in place.

The Arms Control Export Act doesn’t require the President to identify specific conditions that create the emergency but does mandate that he provide a detailed justification.

Pompeo’s move sparked immediate bipartisan pushback from lawmakers, with many questioning whether there was a legitimate emergency. On June 5, a bipartisan coalition of senators introduced 22 individual joint resolutions of disapproval about the proposed arms sales.

When lawmakers voiced frustration with the announcement at the time, Pompeo attempted to reassure them that he intended this “determination to be a one-time event.” He also noted that the provision has been used by at least four previous administrations since 1979 and said, “this specific measure does not alter our long-standing arms transfer review process with Congress.”

Now, Democrats on the Hill are demanding more detail as to why the decision was made to declare the emergency. There were concerns particularly because the emergency declaration was made for the full $8 billion in sales, rather than just a small portion that the Saudis needed immediately.

“The law is written broadly, but an emergency still means something even in the broadest of context,” said a congressional aide. “It is outrageous to suggest that an emergency would require an $8 billion arms sale of this nature whereby much of the weaponry was not built, some licenses were even given to start building those weapons in Saudi Arabia, it is laughable,” the aide added. “They could have followed the normal procedure and Congress would not have been able to stop it, but Congress would have been able to weigh in.”

The emergency declaration is seldom used. It has been invoked a few times throughout history — most recently President George H.W. Bush used it to speed up the sale of arms to Saudi Arabia during Iraq’s invasion of Kuwait.

It is unclear if Pompeo was getting orders to speed up the sale from the White House or if he and his advisers made the call on their own accord.

Pompeo told reporters he provided written answers to the IG at their request earlier this year but did not say what their questions were about. The New York Times reported that those written answers were part of the IG’s investigation into the expedited Saudi arms sale.

Months after the emergency declaration was made, Marik String, a top official in the Political-Military Affairs bureau at the time who worked with Pompeo on the issue, became the acting legal adviser at the department.