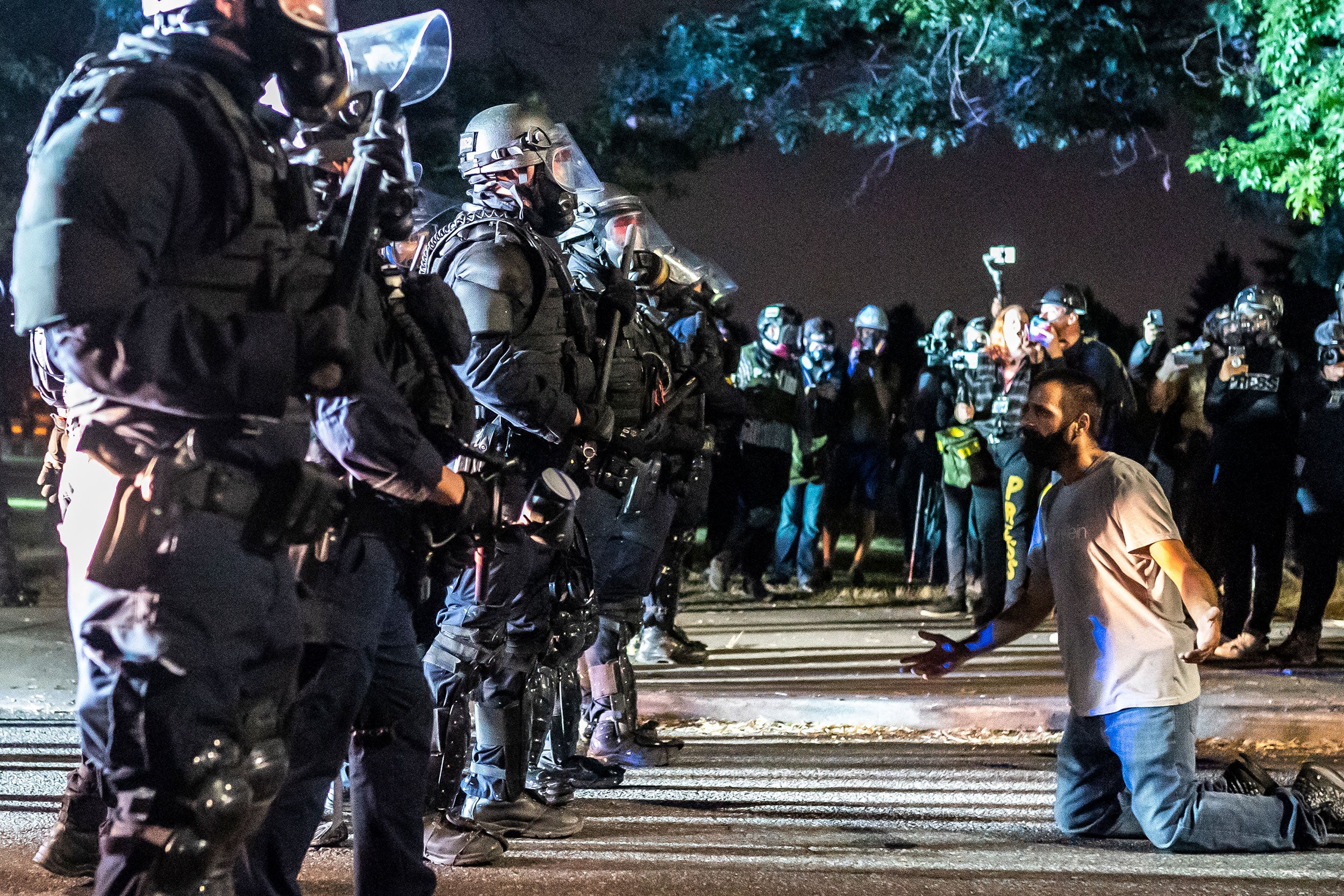 VANCOUVER WASH - SEPTEMBER 5: A protester holds his hands out in front of a police line during a protest against police brutality and racial injustice on September 5, 2020 in Portland, Oregon. Portland has seen nightly protests for the past 100 days following the death of George Floyd in police custody. (Photo by Nathan Howard/Getty Images)
by: Artemis Moshtaghian and Eric Levenson, CNN
Posted: Sep 6, 2020 / 02:47 PM EST / Updated: Sep 6, 2020 / 04:43 PM EST

(CNN) — Portland police arrested over 50 people during fiery demonstrations on Saturday night, the 100th night of protests in the city since the death of George Floyd in late May.

The arrests came after some people in the crowd threw “multiple fire bombs” at officers, one of which set a community memberon fire, police said. Officers located the injured person, who was treated by Portland Fire and Rescue and then taken to a hospital in a private vehicle, police said.

The night’s events began as crowds gathered at Ventura Park and marched at about 9 p.m. local time toward East Portland Community Policing Center, according to a statement released by Portland Police. Police said that many people in the crowd wore black clothing, carried large shields and dressed in protective gear, including helmets, gas masks and body armor.

“It was clear that the intent of the crowd was not peaceful protest,” police said in a statement.

Portland has had a tumultuous week, capping off a summer of protests and rioting. Last Saturday, a supporter of a right-wing group was shot and killed in Portland during a day of clashes between pro-Trump groups and left-wing protesters. On Thursday night, authorities then shot and killed the man suspected in that murder as they moved to arrest him in Washington state.

Saturday night’s demonstrations did not include any gun violence. Still, police said the use of fire bombs presented an “extreme danger to life safety,” and they declared a riot and ordered people to leave the area.

Portland Police said individuals in the crowd began throwing fireworks and mortars at officers, while others were seen throwing rocks. One person had a “wrist-rocket” type of slingshot launching objects, police said.

A sergeant was directly struck by a commercial-grade firework, which burned through his glove and injured his hand, police said. Several officers and troopers were struck by rocks in the head, arms, shoulders, and feet, police said. Officers used tear gas and other crowd control munitions, while also making targeted arrests, police said.

Some people in the crowd were seen lighting dumpsters, garbage cans, and wooden pallets on fire in the streets.