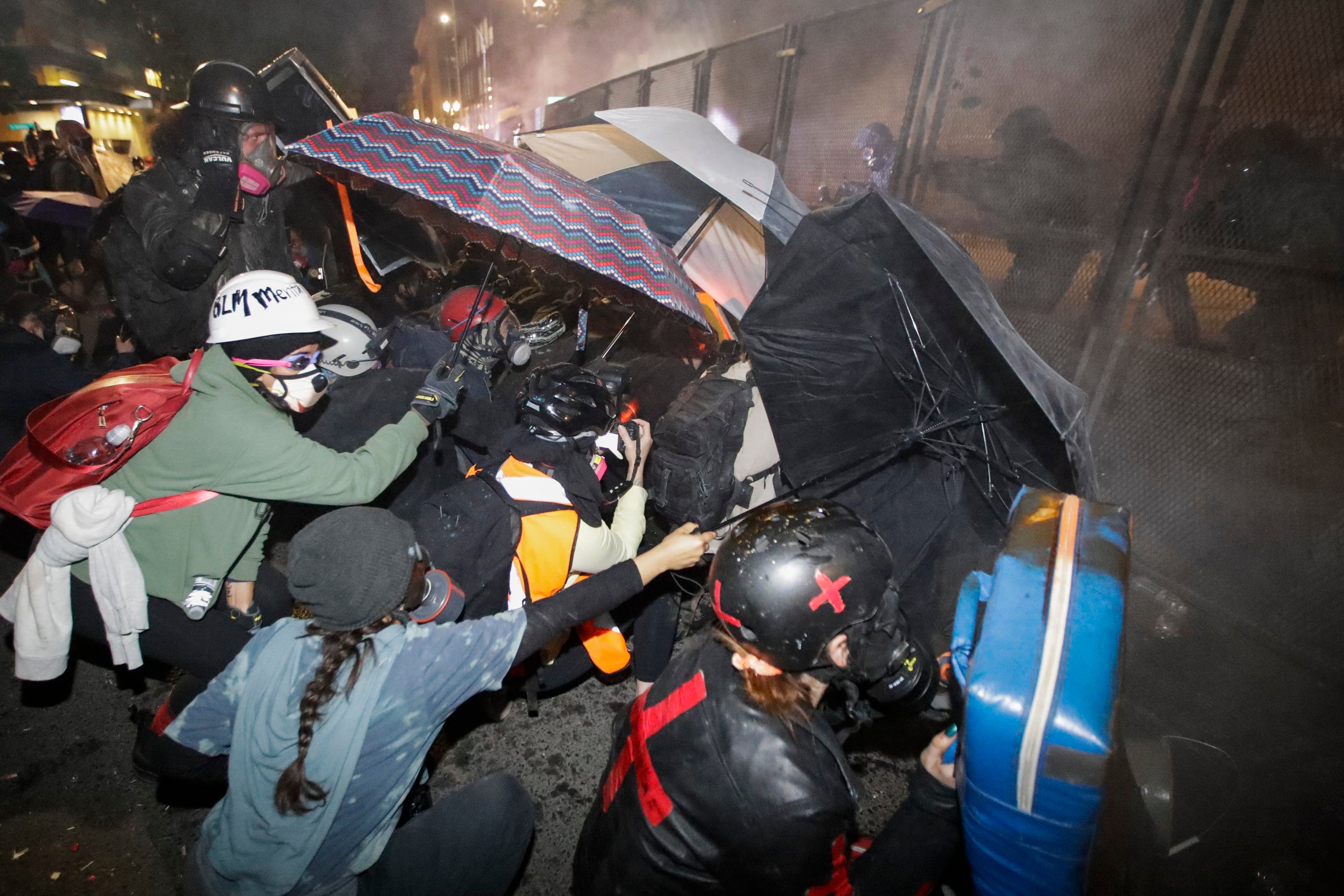 Police described via Twitter the “violent conduct of people downtown” as creating a “grave risk of public alarm.” Police demanded people leave the area surrounding the courthouse, around 1:20 a.m. Sunday, and said that those who fail to adhere may be arrested or subjection to teargas and impact weapons.

By 1:40 p.m., both federal officers and Portland police could be seen on the streets, surrounding the courthouse, attempting to clear the area and deploying teargas.

In the hours leading up to the declared riot, thousands of people gathered in the city Saturday evening for another night of protests as demonstrations over George Floyd’s killing and the presence of federal agents sent by President Donald Trump showed no signs of abating.

Crowds began to march toward the city’s federal courthouse around 9:15 p.m., some marching from 5 miles (8 kilometers) away. A big group of demonstrators in the North Portland neighborhood also paraded by the police precinct there, which was roped off and had officers in riot gear standing outside the building.

They paused outside a downtown hotel, where federal agents are staying, chanting “Feds go home” and yelling the names of Black people killed by police.

As protesters marched down the streets, the Portland Police Bureau posted on social media for people to not walk or block the street as they may be subject to charges such as disorderly conduct and interfering with peace officers.

Hundreds of others crossed the Steel Bridge around 11 p.m. to the courthouse, meeting up with thousands of people that had already been tear-gassed by federal agents.

The fence surrounding the building had flowers and banners draped across as federal agents emerged from the courthouse to inspect it. They were met with fireworks shot over the fence.

Federal agents tossed canisters of teargas at the crowd, while people ran towards the plumes, picked up some of the canisters and threw them back over the fence.

As some protesters attempted to cut the fence using power tools, streams of pepper spray were spewed at the crowd.

At the nearby Justice Center, images and words were projected onto the building including “Keep fighting. Keep pushing.”

During demonstrations the previous night federal agents repeatedly fired tear gas to break up rowdy protests that continued into the early morning Saturday. Authorities say six federal officers were injured and one person was arrested.

Demonstrations have happened in Oregon’s largest city nightly for two months since Floyd was killed in Minneapolis in May. Trump said he sent federal agents to Portland to halt the unrest but state and local officials say they are making the situation worse.

There were demonstrations for police reform and against the increased presence of federal law enforcement in cities across the country Saturday. In Seattle, police declared a riot Saturday afternoon following large demonstrations and deployed flash bangs and pepper spray to try to clear crowds. Authorities made more than 40 arrests said 21 officers suffered mostly minor injuries.

“Across the country people are committing violence, supposedly in support of Portland,” Lovell said. “If you want to support Portland then stop the violence, work for peace. Portland police officers and police facilities have been threatened.

“Now more than ever, Portland police need your support. We want to be with you in the community and working on the real relationships that will create change. We want to get back to the critical issues that have been hijacked by people committing crimes under the cover of the crowds.”

Late Friday, a federal judge denied a request by Oregon’s attorney general to restrict the actions of federal police.

Craig Gabriel, Assistant U.S. Attorney for the District of Oregon, said at the news conference that of the six federal officers who were injured, one suffered a concussion and another was taken to the hospital for burns.

He said one person was arrested for failing to comply with orders. That person was later released without charges, bringing the total number of people arrested on or near the courthouse property since early July to 60.