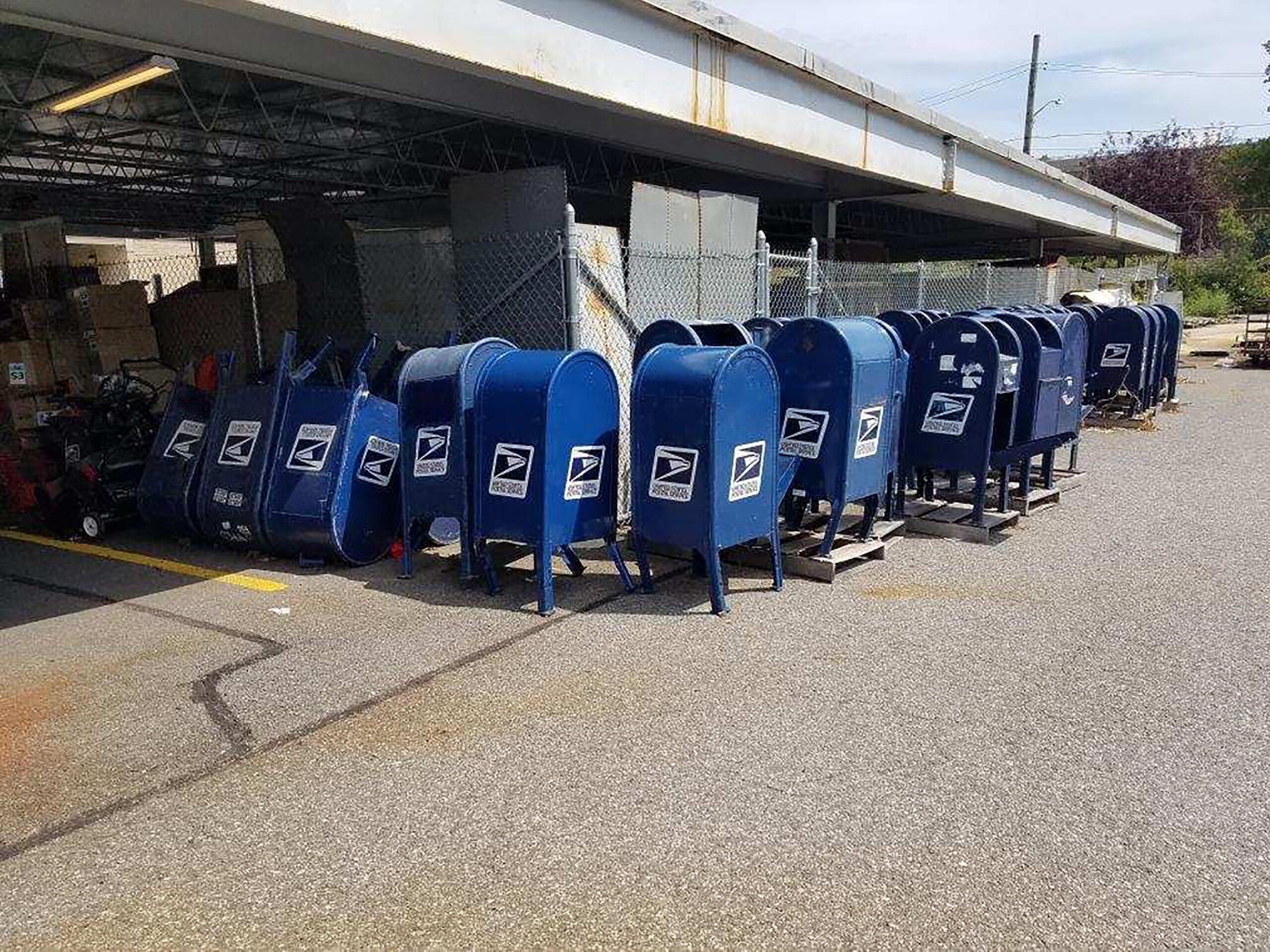 (CNN) — The United States Postal Service has started reducing post office operating hours across several states and removing their iconic blue letter collection boxes as it faces intense pressure to deal with millions of mail-in ballots this fall, according to union officials.

Officials say that in the last week the Postal Service has removed letter collection boxes in at least four states: New York, Oregon, Montana and Indiana. The Post Service has also begun notifying postal workers in at least three states — West Virginia, Florida and Missouri — that they will start to reduce their retail operating hours, according to union officials.

“I was joking earlier with a couple on the call. I wonder if you’re outside trying to hold down your mailboxes. They’re going around literally with tractor-trailers picking up mailboxes,” he said. “You oughta go online and check out what they’re doing in Oregon. I mean, it’s bizarre!”

And Sen. Ron Wyden, a Democrat from Oregon, called the removal of the letter collection boxes “voter suppression” on Twitter. Blaiming President Donald Trump, Wyden said the President is sabotaging the election “right under our noses.”

But Postal Service spokesperson Kimberly Frum suggested the removal, and installation, of the almost 142,000 letter collection boxes nationwide was routine, and “has been based on mail volume received in those boxes.”

Frum said that the postal service has been putting more emphasis on stabilizing the number in use and moving “low-use boxes to high traffic areas.”

Frum did not immediately respond to CNN’s questions about the reduced hours in West Virginia, Florida and Missouri.

The Postal Service has received intense scrutiny in recent weeks as many Americans are expected to vote by mail this presidential election due to the coronavirus pandemic. Despite assuring the public earlier this month that it would be able to handle the added volume of mail-in ballots, the postal service sent letters to multiple states warning them that slowdowns in delivery could cause ballots to show up late and not be counted.

Trump has frequently attacked the postal service, and Louis DeJoy, the newly installed postmaster general, has made sweeping changes to the public service, such as rolling back overtime, leading to service slowdowns. Union officials have consistently warned that new cost-cutting measures put into effect by DeJoy and Postal Service leadership could have a negative effect on the service’s ability to deliver election-related mail on time.

Union officials have said their workers are committed to making sure the mail-in vote is handled quickly and appropriately. However, these new protocols are just the latest changes the Postal Service has enacted that have some voters uneasy and appear to be further eroding confidence in their mail system.

In the St. Louis area, some post offices that had been open until 6:30 p.m. — specifically to serve people getting off-work — would start to close at 5 p.m, according to Rebecca Livingston, American Postal Workers Union president of the St. Louis Gateway chapter.

Union officials in West Virginia, Florida and Missouri also said workers are being told that post offices must close an hour for lunch.

People often come in during their own lunch hour to send mail or purchase retail products like stamps, according to Melvin. The Postal Service reducing the retail hours worries union officials, who believe it could create long lines at clerk windows during the election season.

Compounding the problem, those lines could be lengthened by the reductions in the letter collection boxes in neighborhoods and outside post offices, Melvin and other union officials told CNN.

Letter collection boxes have been removed in at least four states, leading some top politicians to ask the agency for answers.

In New York, Jonathan Smith, president of the local American Postal Workers Union, said the blue boxes that were removed have been taken to a post office in the Bronx. Photos obtained by CNN show a number of the blue mailboxes lined up in a storage area, with some behind chains. It’s unclear if all of these mailboxes had been recently removed.

When originally contacted by CNN about removal of 45 letter collection boxes in Montana, a Postal Service spokesperson would not confirm the removal, saying, “Historically, mail boxes have been removed for lack of use and installed in growth areas. … It is a fluid process and figures can vary from day-to-day.”

Tester said Montanans had told his office that Postal Service collections boxes “may have been removed from Bozeman and Lewistown and that there may be plans to remove boxes from Billings.”

In his letter to DeJoy, Tester asked for the head of the Postal Service to confirm the removal of collection boxes, the rationale for the move and what has been communicated to the public on the matter.

Oregon Sen. Jeff Merkley promised to make sure ballots are delivered on time.

“I can’t believe Trump is making it harder to send mail & vote in November,” Merkley said on Twitter. “We’re going to fight like hell to make sure postal workers & letter carriers can deliver every ballot!”

CNN has reached out to the other senators in New York, Montana, West Virginia, Florida, Missouri and Indiana for comment.