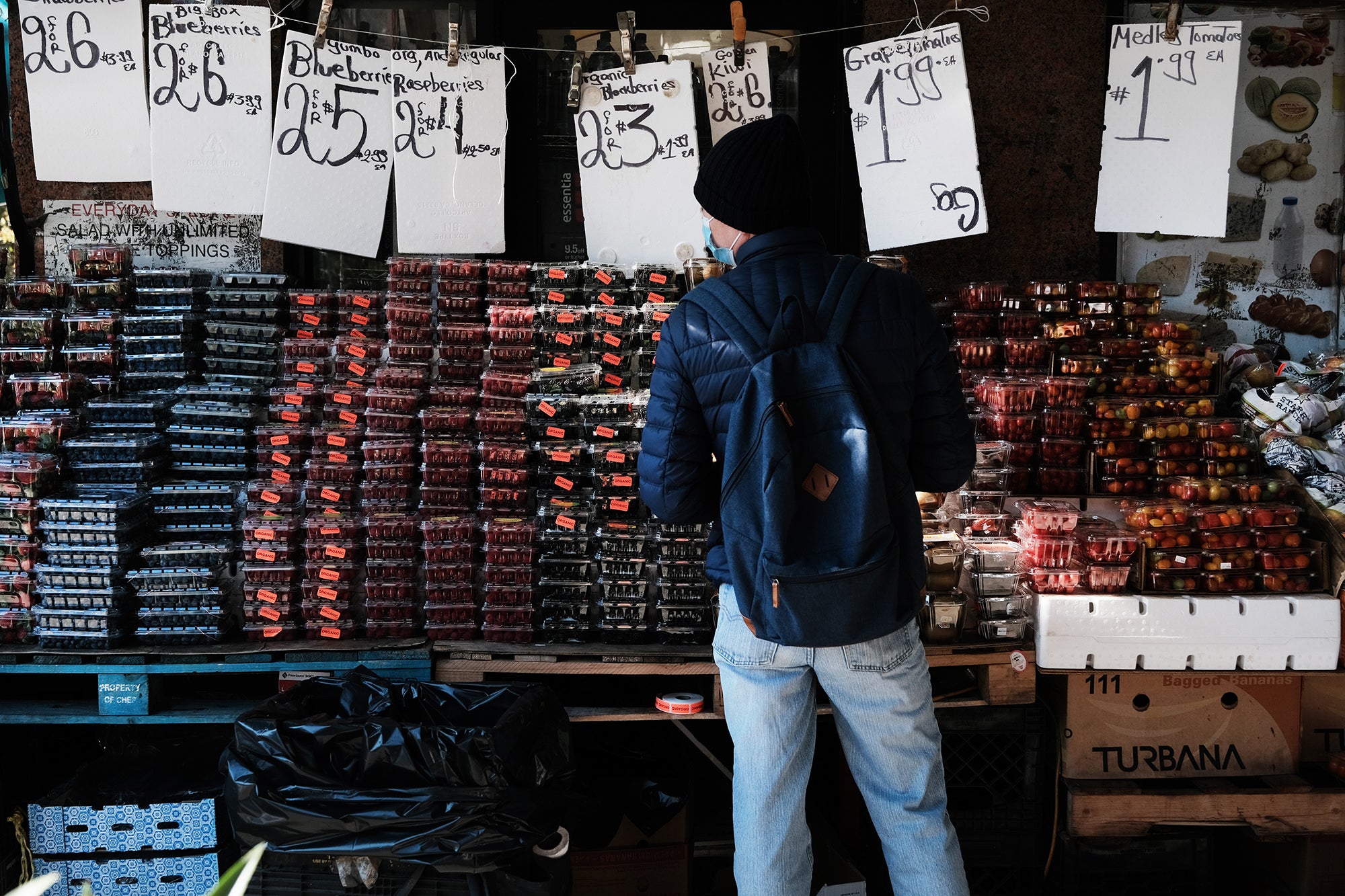 People shop at an outdoor food market in Manhattan on November 05, 2021 in New York City. Inflation is causing U.S. consumer prices to increase solidly in the past few months on items such as food, rent, cars and other goods, A new report by the United Nations Food and Agriculture Organization (FAO) shows that global food prices have hit the highest level in over a decade. In the last year alone, food prices have risen by more than 30%. (Spencer Platt/Getty Images)
by: Matt Egan, CNN Business
Posted: Nov 8, 2021 / 01:22 PM EST / Updated: Nov 8, 2021 / 01:22 PM EST

Unfortunately, it’s going to take longer than expected to work out the supply-demand imbalances at the heart of inflation, Goldman Sachs warned clients Sunday night.

“The inflation overshoot will likely get worse before it gets better,” the bank’s economists wrote in a research report.

Like much of Wall Street and the Federal Reserve, Goldman Sachs had been anticipating high prices would swiftly come back to earth. Now, there is a realization that inflation will be sticking around longer as supply struggles to keep up with surging demand.

Due to “prolonged” supply-demand imbalances, soaring wages and rising rent amid the housing boom, inflation metrics will remain “quite high for much of next year,” Goldman Sachs conceded.

That’s bad news for Americans struggling with the high cost of living, as well as businesses squeezed by shortages and rising prices. Low-income families and those living on a fixed budget are hurt the most by rising prices on necessities like gas, food and clothing.

The inflation forecast is also a setback for the White House because high prices and supply chain problems are souring Americans’ views on the US economy — which had been expected to be a strong point for President Joe Biden this year.

Instead, nearly two-thirds of Americans described the economy as poor in a poll released last week. Nearly half expect the economy to get worse in the next year.

Annual inflation climbed at the fastest pace in more than 30 years during September, according to the Commerce Department. That’s based on the 4.4% increase in the personal consumption expenditures price index. Excluding food and energy, core PCE, the Fed’s preferred inflation metric, rose 3.6% in August and September, the fastest pace since May 1991.

The Fed has now changed its tune on inflation, acknowledging that high prices won’t go away anytime soon.

“We see shortages and bottlenecks persisting into next year, well into next year,” Fed Chairman Jerome Powell told reporters during a press conference last week. “We see higher inflation persisting.”

Consumers are now expecting prices to rise by 5.7% over the next year, according to a survey released Monday by the NY Federal Reserve. That marks the highest level since the survey began in June 2013 and the 12th consecutive monthly increase.

The Fed watches these surveys closely because expectations of high inflation can change consumer and business behavior, creating a self-fulfilling prophesy.

The good news is that Goldman Sachs says its core view remains that supply-demand imbalances will “largely work themselves out, leaving inflation near the Fed’s goal.” That jives with what Powell has said in recent weeks.

“We do not think that aggregate demand is on an unsustainable trajectory or that inflation expectations have become unanchored, and the overshoot should therefore ultimately prove transitory,” Goldman Sachs economists wrote in the report.

In other words, the Fed likely won’t need to slam the brakes on the economy to fight inflation through sharp interest rate hikes.

Likewise, core consumer prices are expected to remain in the mid-5% range for “much of the winter,” before easing to 4% next summer and 3.2% at the end of 2022, Goldman Sachs said.

That’s well above the Fed’s 2% goal and may keep anxiety about the economy high.

As Powell said during his press conference, there remains vast uncertainty over the inflation outlook. No one can say for certain when prices will get back to normal.

“The risks to our forecast are probably tilted to the upside,” Goldman Sachs acknowledged.