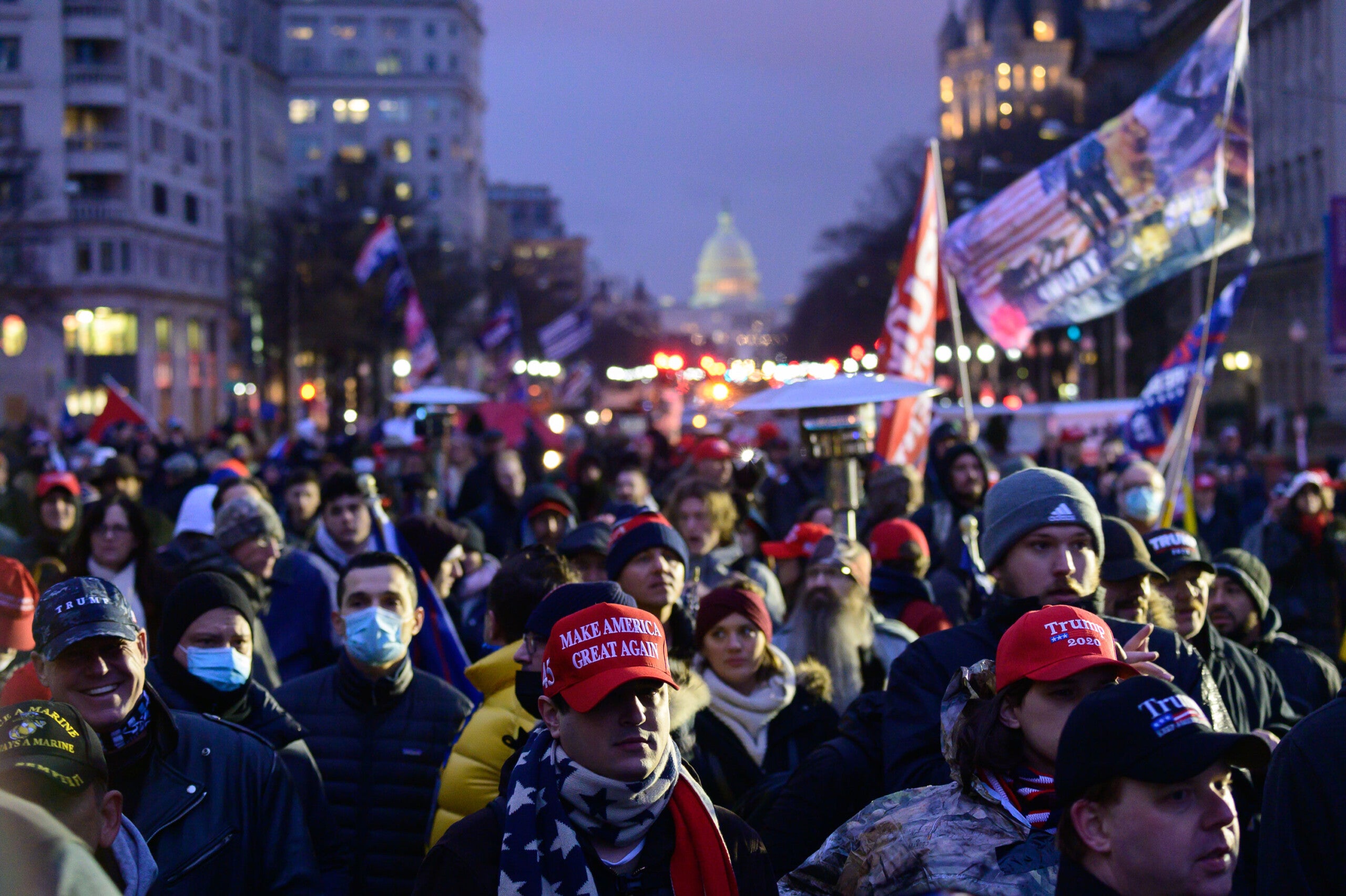 (CNN) — Hundreds of law enforcement officers have mobilized across Washington as thousands of supporters who refuse to accept President Donald Trump’s election loss flooded the nation’s capital Wednesday in protest — in some cases sparring with authorities — as Congress gathered to put the final stamp on President-elect Joe Biden’s victory.

Thousands of protesters gathered around the Washington Monument Wednesday morning as the Elton John song “Tiny Dancer” played from loud speakers. The song was interrupted by an announcement telling people to leave behind backpacks, chairs and flagpoles so people could get through a security checkpoint. Hundreds of people carried flags. Some were American, some were Trump 2020 flags.

As part of their preparations, police posted signs around the district warning of the illegality of gun possession during protests as Trump tweeted his support for the protesters, saying, “Our Country has had enough, they won’t take it anymore!” and “We Hear you (and love you) from the Oval Office.”

The Department of Homeland Security, which has staffed a “Virtual Situation Room” to help communication between different agencies, is “not currently tracking any active threats,” spokesman Alexei Woltornist said.

Trump traveled a short distance from the White House to the rally Wednesday morning. About 20 aides were outside awaiting Trump’s departure, audibly shouting “Save our country” as he boarded his SUV. Trump gave a fist bump and appeared to blow a kiss.

Trump addressed a large, tightly packed and largely maskless crowd of supporters on the Ellipse. His remarks got off to an inauspicious start as Trump’s microphone appeared to be turned off as he began speaking.

“We can’t hear you!” members of the audience were heard shouting on the video feed, though he appeared unaware and kept speaking.

Moments later, audio was restored, and Trump was railing against the media.

Trump’s speech included calls for his vice president to step outside his constitutional bounds and overturn the results of the election.

Pence released a letter he wrote to congress Wednesday just after noon, saying he wouldn’t object to Biden’s victory.

A large glass barrier shielded Trump from the crowd, similar to when he spoke in front of the Lincoln Memorial on the Fourth of July 2019.

Ahead of Trump’s speech, Rudy Giuliani was addressing the rally on the Ellipse, baselessly repeating claims that voting machines were “crooked,” and continuing to insist that Pence can do something today to change the election’s outcome, which he does not have power to do. There is no evidence of widespread voter fraud.

“Let’s have trial by combat!” Giuliani told the enthusiastic crowd.

District of Columbia Mayor Muriel Bowser said the District is “absolutely prepared” for protests and announced that that at least ten people were arrested overnight related to the protests. At least one person was arrested for carrying an unlicensed gun and six people were charged with assault, including one for assaulting a police officer.

“We had several arrests related to that activity, but not a single one of them was a D.C. resident,” she said.

Authorities — a mix that includes local police, National Guard and federal uniformed officers — had already arrested several people ahead of demonstrations including the leader of the Proud Boys, a far-right group that Trump directly addressed during an autumn debate to “stand back and stand by.“

The Proud Boys’ leader, Henry Tarrio, who goes by Enrique Tarrio, was released from police custody Tuesday on charges related to a protest last month and ordered by a local judge to stay out of D.C. as he awaits trial, including during this week’s protests.

In the days leading up to Wednesday’s planned march, police posted signs declaring areas where they expect protesters gun-free zones between Monday and Thursday. “ALL firearms prohibited within 1000 feet of this sign,” they read, taped to light poles.

Protesters dressed in pro-Trump regalia gathered Tuesday across the city while others posted photos of their travel to Wednesday’s rally on social media. Several speakers on Tuesday led the crowds in chants of “four more years,” even as Trump has all but exhausted legal avenues for turning the tide against Biden.

One after another, speakers put forth claims that the election was stolen, imploring people to “fight” for victory on Wednesday. Trump’s loss has been reaffirmed by courts and state election officials dozens of times since the election.

Tuesday’s speakers included Trump adviser Roger Stone, who was convicted of lying to Congress, obstruction and threatening a witness before being pardoned by the President.

“We don’t trust the media’s crystal ball” on the election results and the finalization of the Electoral College count by Congress on Wednesday, said Dustin Stockton, one of the march organizers. But, he said, “it’s clear that Wednesday will be historic.”

“(Trump) still has cards to play that he hasn’t played,” Stockton said. ”We won’t stop fighting until the President does.”

A DC police spokesman, Sean Hickman, would not comment on police staffing for the demonstrations or say whether they’d attempt to keep pro-Trump supporters separate from counterprotesters. It’s also not clear how aggressive police will be in enforcing the district’s gun laws.

“As with any known, large demonstration, we will continue to monitor and assess each activity, and plan accordingly with our local and federal law enforcement partners,” Hickman said.

Federal agencies over the summer created confusion during protests by sending agents into demonstrations in unmarked vehicles and without names, agencies or other identifiers on uniforms. Congress passed a law requiring federal agents to wear some unique identifier on their clothing while working protests.

A letter Tuesday from DC Mayor Muriel Bowser to the Department of Justice regarding the upcoming protests noted problems police had encountered when armed officers working for federal agencies staffed protests without identification over the summer, including in Lafayette Park.

This “caused confusion among residents and visitors and could become a national security threat with no way for MPD and federal law enforcement to decipher armed groups,” Bowser wrote.

Armed and unidentifiable federal agents dressed in camouflage arrested protesters in Portland, Oregon, over the summer and took them away in unmarked vehicles. Federal officials later identified them as agents of the US Customs and Border Protection, but they weren’t wearing name badges or agency identifiers.

Around the same time, Trump branded anti-racism protesters in the country as “terrorists,” and promised to ”surge” paramilitary-style units into other cities. Outrage over the tactics led to Congress passing the law requiring identifying marks on federal agents working protests.

US Sen. Chris Murphy, a Connecticut Democrat, also wrote to federal officials Monday reminding them of this new law.

“Members of the armed forces and federal law enforcement personnel responding to civil disturbances are now required to visibly display both their name or an individual identifier, and the name of the armed force, or federal entity by which they are employed,” he wrote.

The US Bureau of Prisons sent 100 “specially trained officers” to the Department of Justice in D.C. to supplement department facility security, Justin Long, a spokesman for that agency, said Tuesday. They’ll function as a “reserve” for other Justice Department security teams.

Mark Morgan, the senior official performing the duties of the commissioner of US Customs and Border Protection, said Tuesday that the agency has not been asked to deploy agents but added that it has a “modest, quick reactionary force that will be on standby just in case our assistance is requested.”

Ken Cuccinelli, the senior official performing the duties of the Homeland Security deputy secretary, said the agency is “prepared to surge personnel, as needed.”

“Secret Service is at the heart of a lot of this stuff. They have a long history. … And we’re coordinating, not just the Service coordinating, but to the extent the Federal Protective Service, which is protecting literally dozens of locations around the city, has any need for backup, we’re prepared for that,” Cuccinelli said.

“Obviously, we hope all these different protests go off peacefully, but we are prepared to surge personnel, as needed, where needed across the district in coordination with DOJ and then local authorities, as well, are so intimately involved.”

Acting Defense Secretary Christopher Miller on Monday approved a request from the District of Columbia to deploy a limited number of DC National Guard forces to support the Metropolitan Police Department and fire department. The guardsmen will not be armed and be mostly assisting with traffic control.

Expected at the rallies are members of the Proud Boys, a far-right group seen often in black and yellow at Trump rallies and who sometimes engage in street fights with far-left protesters. Affiliates of the group have also shown apparent ties to Stone, including at his criminal trial in late 2019. This comes about a month after a Proud Boys protest ended with stabbings and the burning of a Black Lives Matter banner taken from a Black church.

Tarrio was arrested Monday and charged in connection with the burning of the banner and ordered released from police custody on Tuesday. The judge ordered him to stay out of the District of Columbia except for his own court appearances until further notice, according to court records.

Tarrio had two high-capacity gun magazines when police arrested him, according to authorities, and he was also charged with possession of a high-capacity feeding device.

Tarrio did not return CNN’s calls or texts Monday. He took responsibility for burning the banner last month, writing in a post on the social media website Parler that “against the wishes of my attorney I am here today to admit that I am the person responsible for the burning of this sign.”

He also posted on social media that Proud Boys members would be “incognito” for this week’s protests.

Tuesday’s protesters chanted “Enrique” in support of Tarrio. A few speakers also went on anti-mask rants, one of them saying masks worn to prevent the spread of coronavirus are a means of “control” for officials “trying to take your freedom away.” A vast majority of the several hundred people at Freedom Plaza were not wearing masks throughout the afternoon and evening.

Founded in 2016, the Proud Boys group lists among its central tenets a belief in “closed borders” and the aim of “reinstating a spirit of Western chauvinism.” In online statements, it’s claimed it has used violence only in self-defense. Members are often seen carrying firearms and bats and donning protective gear. The group’s ideology has been labeled “misogynistic, Islamophobic, transphobic, and anti-immigration” by the Anti-Defamation League.