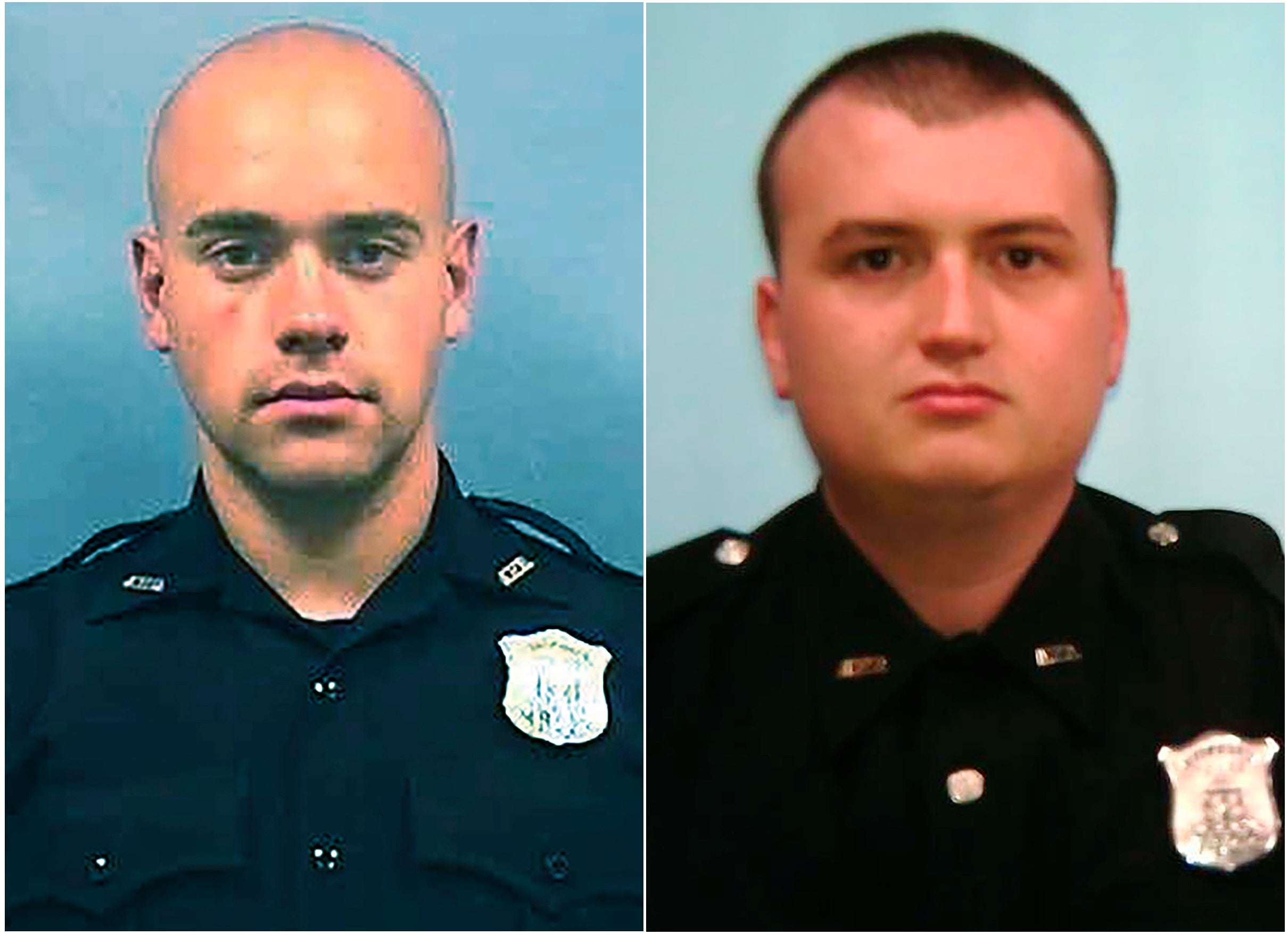 This combination of photos provided by the Atlanta Police Department shows Officer Garrett Rolfe, left and Officer Devin Brosnan. Rolfe, who fatally shot Rayshard Brooks in the back after the fleeing man pointed a stun gun in his direction, was charged with felony murder and 10 other charges. Brosnan, who prosecutors say stood on Brooks' shoulder as he struggled for life after a confrontation was charged with aggravated assault. (Atlanta Police Department via AP)
by: KATE BRUMBACK Associated Press
Posted: Jun 18, 2020 / 10:01 AM EST / Updated: Jun 18, 2020 / 10:01 AM EST

ATLANTA (AP) — As Rayshard Brooks lay dying in a Wendy’s parking lot, prosecutors say the Atlanta police officer who shot him in the back kicked him and didn’t give him medical attention for more than two minutes.

Rolfe, who is white, shot Brooks after the 27-year-old black man grabbed a Taser and ran, firing it at the officer, the prosecutor said. But when the officer fired his gun, Brooks was too far ahead of him for the Taser to be a danger, and it had already been fired twice, so it was empty and no longer a threat, Howard said.

On Wednesday, the prosecutor announced a murder charge against Rolfe and an aggravated assault charge against a second officer, Devin Brosnan, who the district attorney said stood on Brooks’ shoulder as he struggled for his life.

The decision to prosecute came less than five days after the killing rocked a city — and a nation — already roiling from the death of George Floyd under a police officer’s knee in Minneapolis late last month.

Rolfe’s lawyers said he feared for his and others’ safety and was justified in shooting Brooks. Rolfe opened fire after hearing a sound “like a gunshot and saw a flash in front of him,” apparently from the Taser.

“Mr. Brooks violently attacked two officers and disarmed one of them. When Mr. Brooks turned and pointed an object at Officer Rolfe, any officer would have reasonably believed that he intended to disarm, disable or seriously injure him,” the lawyers said in a statement.

The prosecutor said Brooks “never presented himself as a threat” during a more than 40-minute interaction with officers before the shooting. An officer found him asleep behind the wheel of his car in the restaurant’s drive-thru, and a breath test showed he was intoxicated.

“Mr. Brooks on the night of this incident was calm, he was cordial and really displayed a cooperative nature,” Howard said.

The charges reflect a potential “sea change” in tolerance for violence by police, said Caren Morrison, a Georgia State University law professor who used to be a federal prosecutor in New York.

“If they were to get a conviction, I feel like what they’re saying is that policing as we know it needs to change,” she said. “This I think five years ago wouldn’t have been charged.”

Morrison said the view until now has generally been that officers are justified in using deadly force when the suspect has a stun gun or other weapon that could cause them “grievous bodily harm.”

The Atlanta Police Department tweeted late Wednesday that it had more officers calling out than normal but that it had “enough resources to maintain operations & remain able to respond to incidents.”

Atlanta Mayor Keisha Lance Bottoms said on CNN that many of the department’s partners had been notified in case they needed to call in others. She said the true test would come Thursday.

“If we have officers that don’t want bad officers weeded out of the force then that’s another conversation we need to have,” Bottoms said.

The felony murder charge against Rolfe, 27, carries life in prison or the death penalty, if prosecutors decide to seek it. He was also charged with 10 other offenses punishable by decades behind bars.

The district attorney said Brosnan, 26, is cooperating with prosecutors and will testify. But one of his attorneys, Amanda Clark Palmer, denied that and said Brosnan was not pleading guilty to anything.

Clark Palmer said the charges were baseless and that Brosnan stood on Brooks’ hand, not his shoulder, for just seconds to make sure he did not have a weapon.

A lawyer for Brooks’ widow cautioned that the charges were no reason to rejoice.

Brooks’ widow, Tomika Miller, said it was painful to hear the new details of what happened to her husband in his final minutes.

“I felt everything that he felt, just by hearing what he went through, and it hurt. It hurt really bad,” she said.

The news came as Republicans on Capitol Hill unveiled a package of police reform measures and as states pushed forward with getting rid of Confederate monuments and other racially offensive symbols.

Atlanta Police Chief Erika Shields resigned less than 24 hours after Brooks died, and the Wendy’s restaurant was burned. Rolfe was fired, while Brosnan was placed on desk duty.

Police had been called to the restaurant over complaints of a car blocking the drive-thru lane. Police body-camera video showed Brooks and officers having a relatively calm and respectful conversation before things rapidly turned violent when officers tried to handcuff him. Brooks wrestled with officers, grabbed one of their stun guns and fired it at one of them as he ran through the parking lot.

An autopsy found he was shot twice in the back. One shot pierced his heart, the district attorney said. At least one bullet went into a vehicle that was in line at the drive-thru.

The district attorney said Rolfe and Brosnan have until 6 p.m. Thursday to surrender. He said he would request $50,000 bond for Brosnan and no bail for Rolfe.

In the Minneapolis case, Derek Chauvin, the officer who put his knee on Floyd’s neck for several minutes, has been charged with murder. Three other officers have been charged with aiding and abetting. All four were fired and could get up to 40 years in prison.