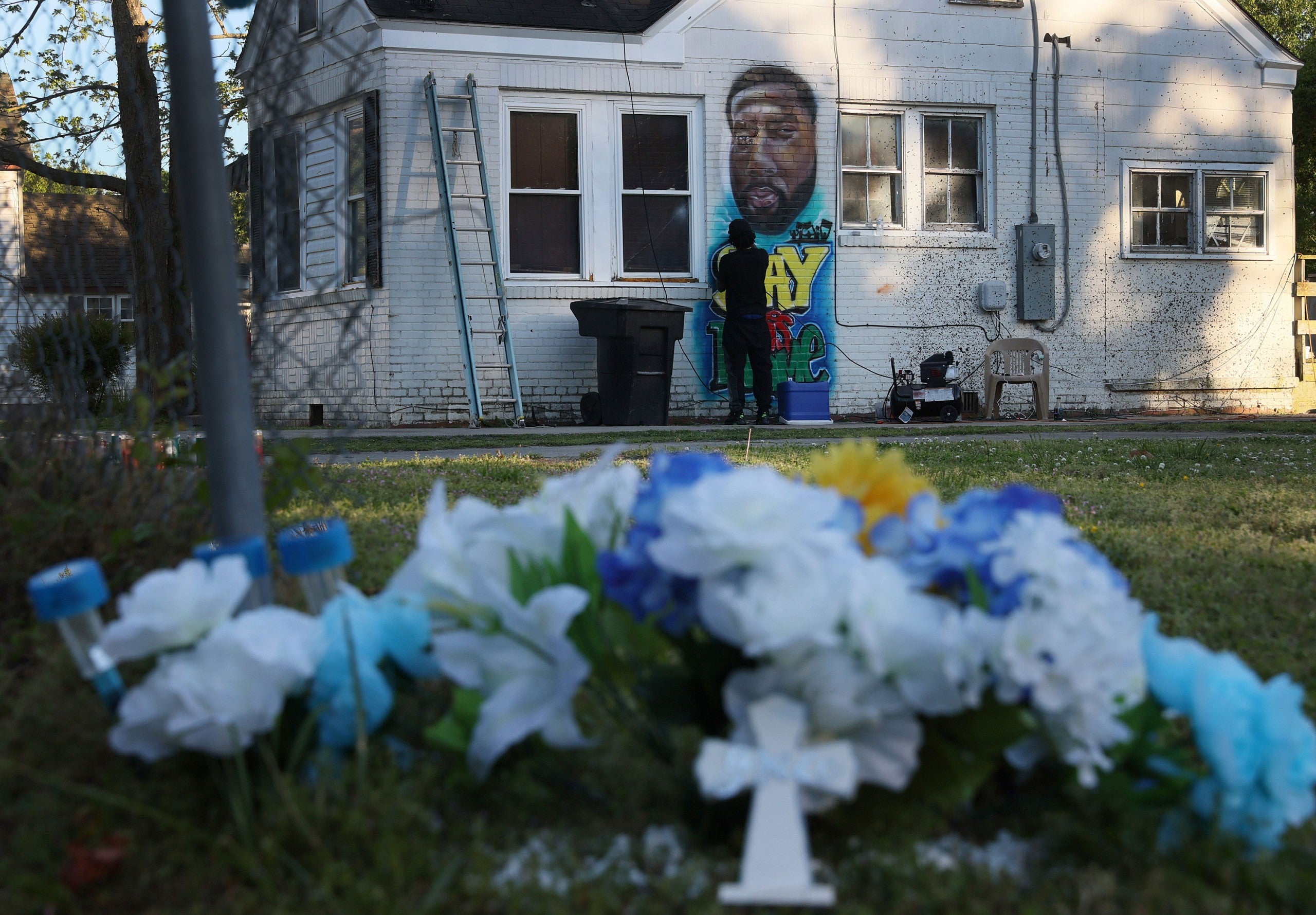 ELIZABETH CITY, NORTH CAROLINA - MAY 01: Flowers lay on the ground as Ulysses Edwards paints a portrait of Andrew Brown Jr. on the side of the house in the area where he was killed on May 01, 2021 in Elizabeth City, North Carolina. Mr. Brown was shot to death by Pasquotank County Sheriff's deputies. (Photo by Joe Raedle/Getty Images via CNN)
by: Madeline Holcombe and Eric Levenson, CNN
Posted: May 18, 2021 / 12:26 PM EST / Updated: May 18, 2021 / 12:26 PM EST

“Mr. Brown’s death, while tragic, was justified because Mr. Brown’s actions caused three deputies to reasonably believe it was necessary to use deadly force to protect themselves and others,” Womble said.

Four body-camera videos shown to the public for the first time showed the entirety of the incident, which lasts 44 seconds.

The videos show that armed law enforcement officers arrived to arrest Brown, a 42-year-old Black man, and surrounded him as he sat inside his vehicle. Brown reversed his car into a corner, pulling a deputy off his feet, and then accelerated forward in his attempt to flee, forcing a deputy to jump out of the way, the videos show.

“When you employ a car in a way that puts officers’ lives in danger, that is a threat,” Womble said.

A sergeant on scene then fired into the front window, Womble said. The car continued forward, and officers fired several more shots at Brown from the side and through the back windshield, he said. Brown’s vehicle accelerated across a vacant lot, and the vehicle drove at another officer sitting in an unmarked police vehicle, which accelerated to avoid a collision, Womble said.

The vehicle then came to a rest against a tree, and the officers removed Brown and called for emergency services, he said.

Womble said Brown was shot twice, an autopsy found: once in the shoulder and once in the back of the head. A total of 14 shell casings were found on scene, Womble said. One of the shots hit the vehicle and ricocheted into a house, he said.

Womble said the speed at which the car was moving was not relevant in his decision, and he noted that Brown was surrounded on all sides by officers.

The conclusion is a stark contrast to commentary from Brown’s family and their attorneys, who said the body-camera and dash-cam videos of the shooting show Brown was not a threat to the officers.

“It was absolutely, unequivocally unjustified,” attorney Chance Lynch said last week. “Our legal team is more committed now to pursue justice … because what we saw today was unconstitutional and it was unjustifiable.”

The killing led to protests in Elizabeth City against police violence and the authorities’ lack of transparency.

In the aftermath of the shooting, Pasquotank Sheriff Tommy Wooten put seven deputies on administrative leave. He has since reinstated four deputies he said did not fire their weapons. The three who did fire remain on leave.

Members of Brown’s family were allowed by a court order to view some body camera footage of his death, but they and members of the community have called for the public release of the videos.

On April 28, Womble said Brown’s car in the video was stationary when officers approached shouting commands. As officers attempted to open a door on the car, the vehicle backed up and made contact with an officer.

Womble said the car then stopped before moving forward and again made contact with law enforcement. After the car moved forward, shots are heard, Womble said.

Attorneys for the family have provided different explanation of what happened.In the bodycam footage, Lynch said he saw Brown ambushed while sitting in his vehicle. At all times his hands were visible, Brown was possibly on his phone at the time, and he did not pose a threat to law enforcement, the attorney said.

A first shot was fired, at which time Brown put his car in reverse, “several feet, if not yards away, from the police who were there,” Lynch said. In the videos viewed, Lynch said he saw Brown turn his wheel to the left, and away from law enforcement, and that police officers were not visible behind his vehicle.

“At no point did we ever see Mr. Brown make contact with law enforcement,” Lynch told reporters. “We were able to see where they possibly reached out to make contact to him, but we did not see any actions on Mr. Brown’s part where he made contact with them or try to go in their direction. In fact, he did just the opposite.”

Lynch said that Brown went in the opposite direction of a group of officers in front of his vehicle, and that a second shot was fired as he turned to the left to go across his yard. Lynch said he lost count of how many shots were fired in all.

“There were so many shots, that we found difficulty in counting the number of shots that his vehicle received. At some point, there was a final shot, where it appeared that at that final shot Mr. Brown lost control,” the attorney said.

The attorneys for Brown’s family have called for Womble to recuse himself from the case, citing “well-defined” conflicts between the prosecutor and the sheriff’s office. 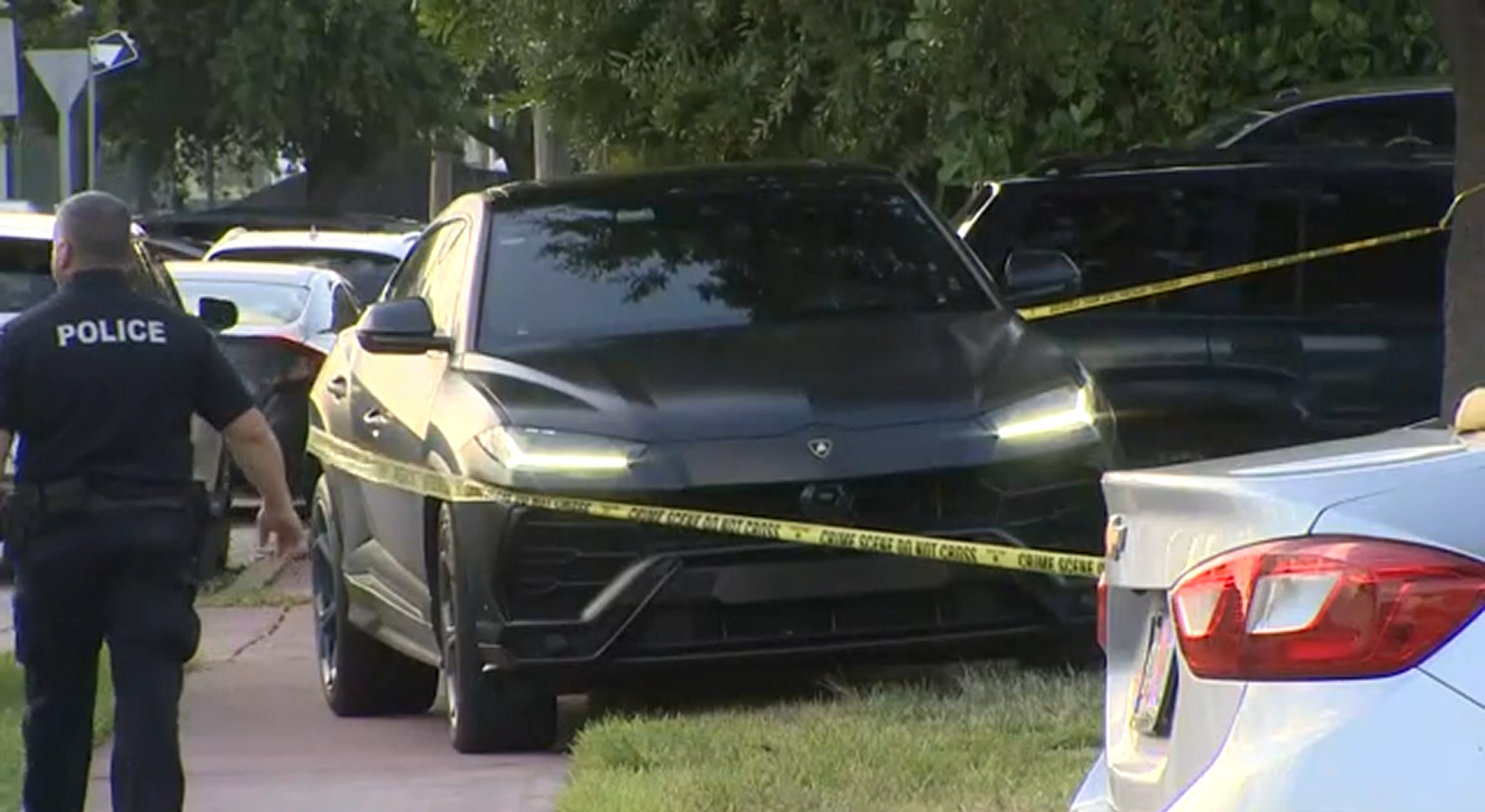 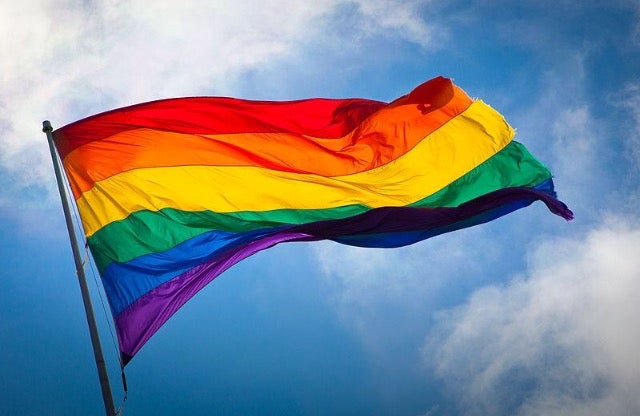 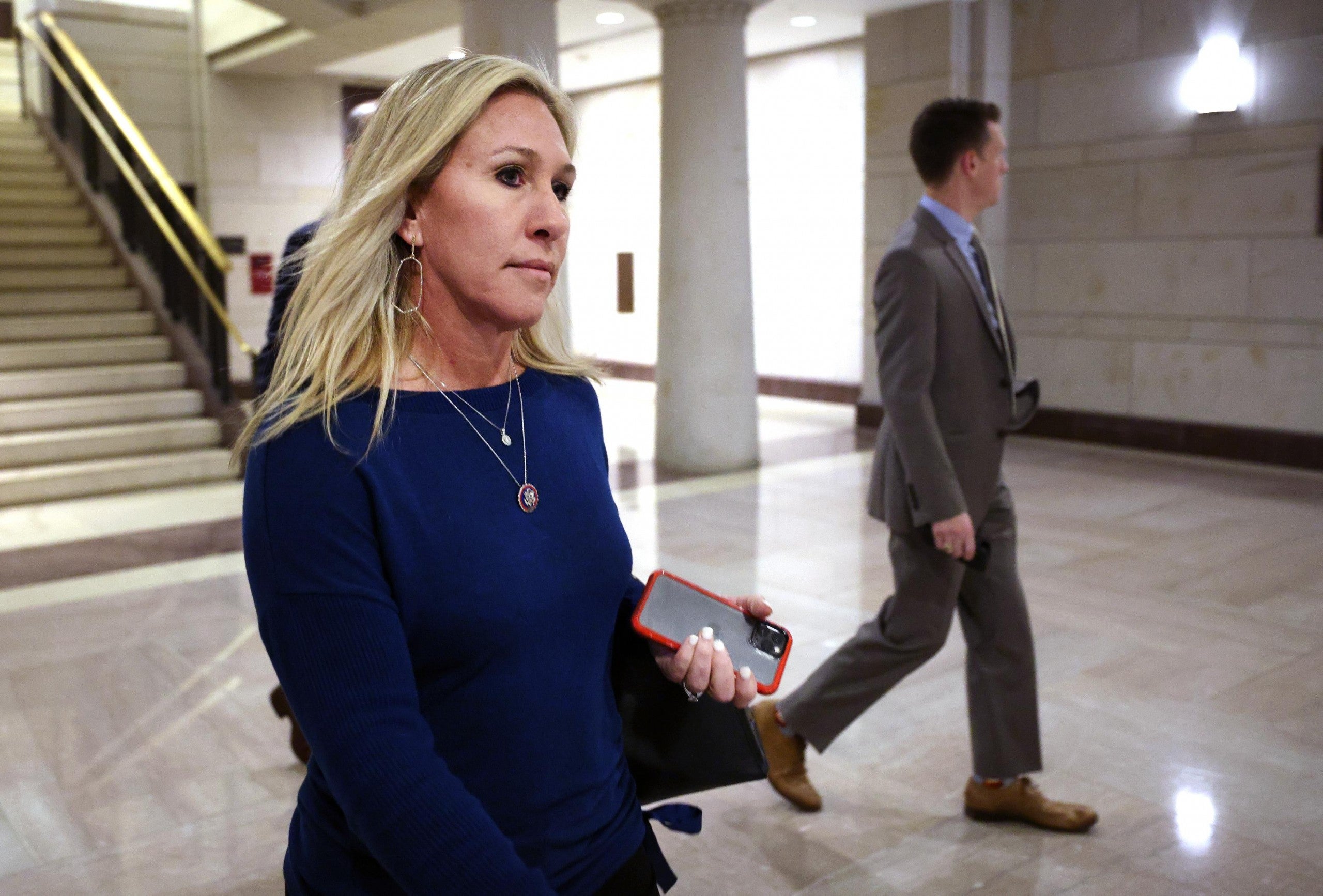 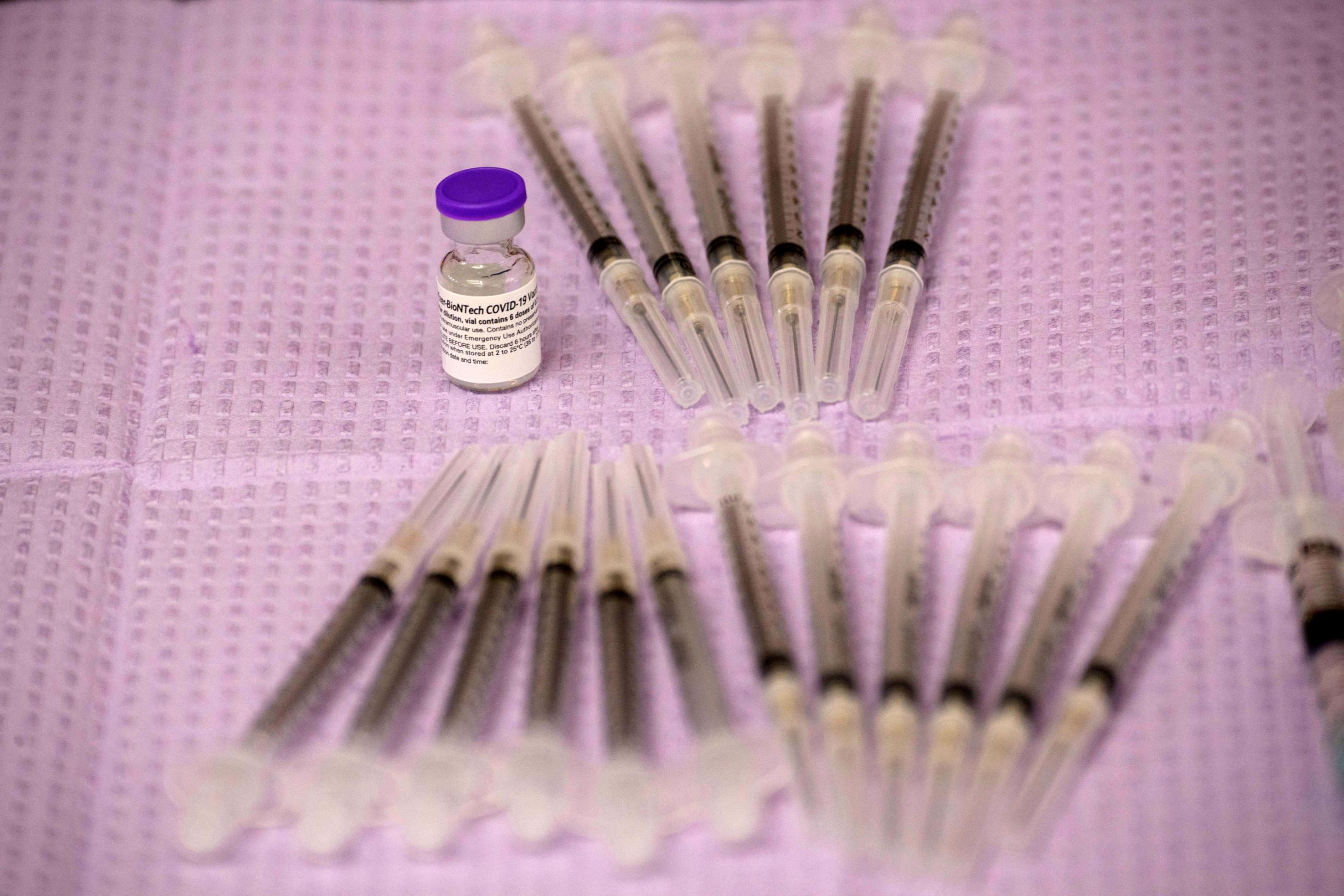