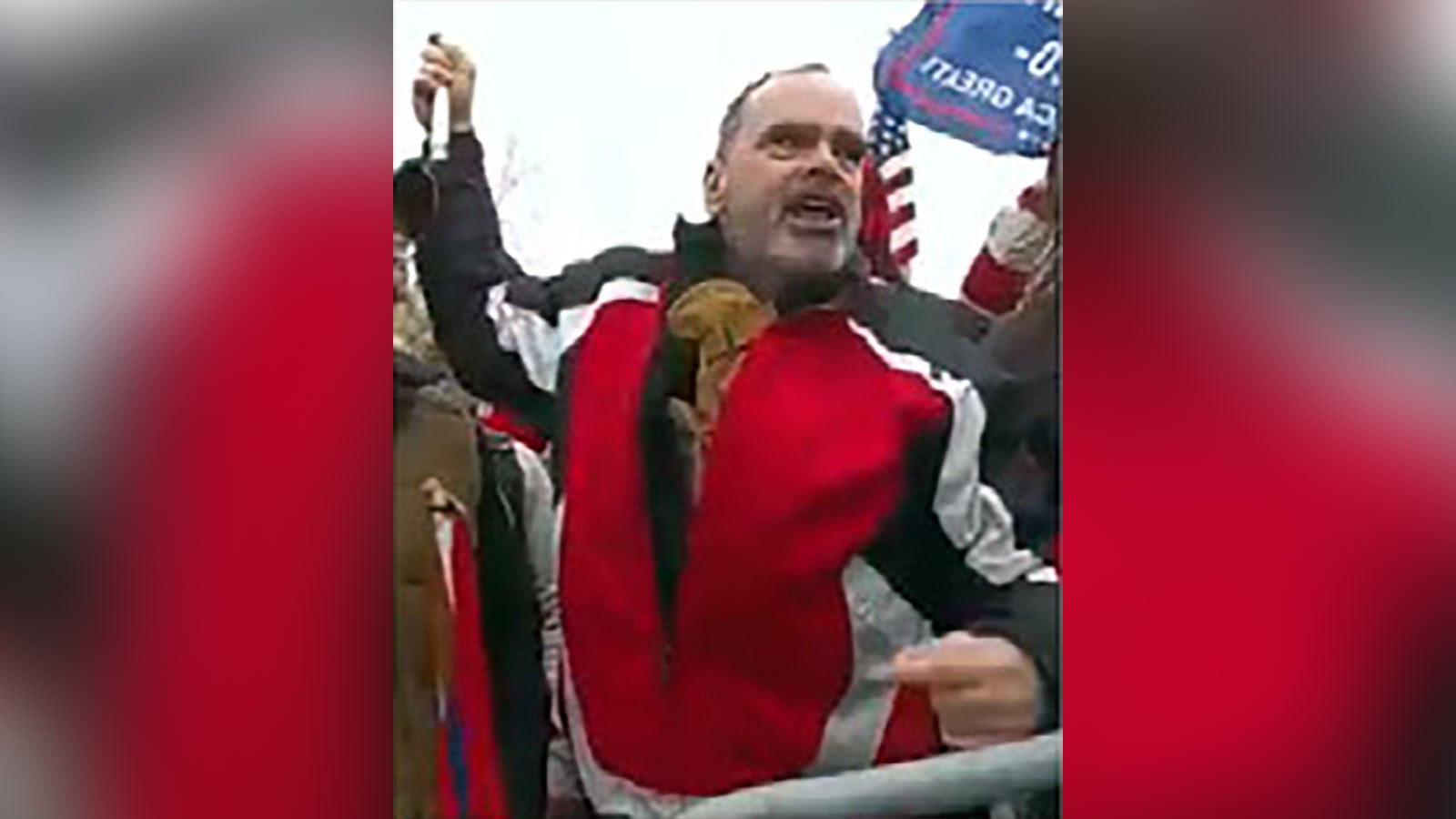 Thomas Webster, a former Marine and retired New York Police Department officer, is charged with allegedly using an aluminum pole to assault a police officer during the Capitol riot on January 6. (Provided Photo/Department of Justice via CNN)
by: Paul P. Murphy and Brynn Gingras, CNN
Posted: Feb 24, 2021 / 05:33 AM EST / Updated: Feb 24, 2021 / 05:33 AM EST

Prosecutor Benjamin Gianforti said that Webster, 52, turned himself into the FBI field office in New York’s Hudson Valley at 2:35 p.m. A law enforcement source with knowledge of the investigation told CNN that Webster retired from the NYPD in 2011 and had been part of the uniformed security detail at City Hall and Gracie Mansion — the traditional residence of the New York City mayor.

Recounting what’s in the body cam video of the incident, Gianforti told the court in a virtual hearing Tuesday based in White Plains, New York, that Webster is seen allegedly attacking a police officer with an aluminum pole that had a Marine Corps flag fixed on it.

Afterward, Gianforti claimed that Webster is then seen in the video allegedly beating the officer with his hands, ripping their gear off, which “caused the police officer to choke,” because it “cut off [the officer’s] air for a short period of time.”

The prosecutor also said that Webster is allegedly heard in the body cam video calling that the police officer he was attacking “a f—ing piece of s–t” and “commie mother f—er.”

In describing the video further, Krause said that as the man that prosecutors say is Webster swings the pole it “hits the metal barricade in front of the officer multiple times,” and that afterward, “that pole is bent beyond recognition.”

“When he is disarmed of the pole, he doesn’t take a step back,” Krause said. “The barricade opens up and he charges through it at the officer, and they are wrestling on the ground.”

Prosecutors had asked for Krause to keep Webster in custody ahead of a detention hearing, citing in part the violent actions he’s alleged to have committed during the riot and insurrection. During the deliberation over pre-trial detention, Webster told his attorney that prior to the alleged assault, he had been punched by the police officer

However, Gianforti said the Justice Deparatment had reviewed the 10 minutes of footage taken by the police body cam before the alleged assault, and found “nothing in there that suggests that Mr. Webster was struck by this officer or any other officer.”

Krause approved the Justice Department’s request for Webster to be detained before his trial.

Monroe confirmed to the court that Webster was honorably discharged by the Marines and that he is a retired NYPD officer. He said his client went to Washington to protest issues that “Tom felt very strongly about,” and was “urged on by our former President.”

Webster’s next appearance is scheduled for March 3.