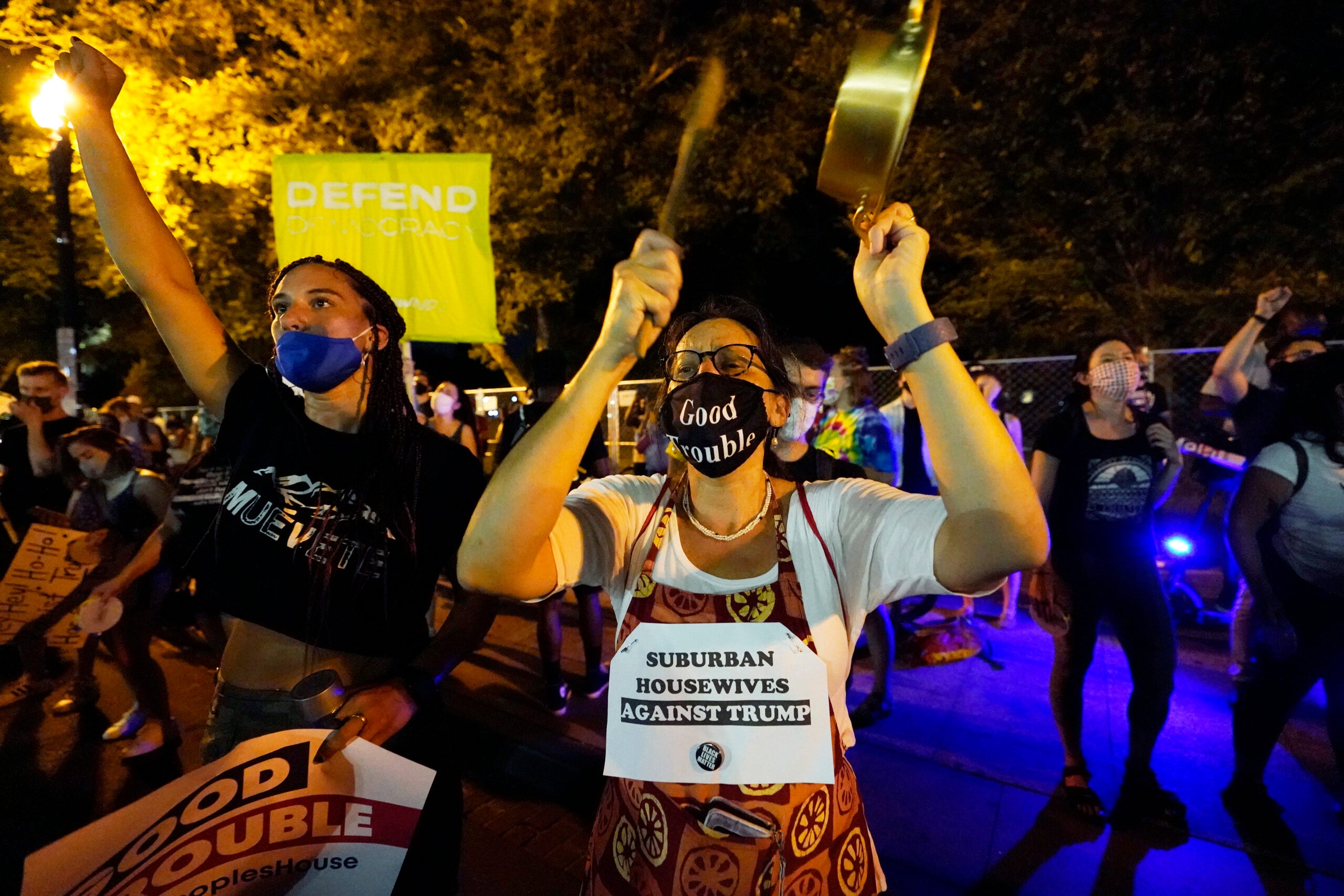 WASHINGTON (AP) — Hundreds of demonstrators gathered around the White House for a “noise demonstration and dance party” in an attempt to drown out President Donald Trump’s speech accepting the Republican presidential nomination.

And later, a crowd enveloped U.S. Sen. Rand Paul of Kentucky as he left the convention, yelling for him to say the name of police shooting victim Breonna Taylor, who was killed in his state, but there was no indication the protesters were the same.

“I hope you hear us, Trump,” the leader of the popular local band TOB shouted near the site of Trump’s speech. The band blared Go-Go music, a distinctive D.C. variant on funk, as it moved in the direction of the White House, where Trump delivered his acceptance speech to a crowd of more 1,500 people on the South Lawn.

One protester held up a sign, “Nightmare on Pennsylvania Avenue” — the street where the White House is located.

There was no indication that Trump heard the protesters, but there were a few points when a mix of sirens, music and blowhorns could be heard in the background and spectators in the back turned to see where the sounds were coming from.

Acknowledging the coronavirus pandemic, the demonstrators wore masks but there was no social distancing.

“Make some noise if you want to drown out Trump,” protest organizer Justin Johnson said.

After the convention concluded, there were skirmishes as protesters yelled and threw water bottles at police at the historic St. John’s Church near Black Lives Matter Plaza. There were some arrests.

Video posted online showed dozens of people confronting Paul and his wife, who were flanked by police officers, on a street after midnight. Protesters shouted “No Justice, No Peace” and “Say Her Name” before one appears to briefly clash with an officer, pushing him and his bike backward, sending the officer into Paul’s shoulder.

Paul later tweeted that he had been “attacked” by a “crazed mob” a block from the White House. The senator and his wife kept walking and did not appear to have been touched by any of the protesters or to have suffered any injuries.

Videos showed other attendees also being confronted by protesters after leaving Trump’s event.

There was a robust police presence, but the noise demonstration outside the White House was generally peaceful. There was a moment of levity at the end.

“You guys gotta get some rhythm,” a protester told Secret Service officers.

“Would you have rhythm if you were wearing 30 pounds of gear,” one responded.

The demonstration was significantly smaller than the protests that rocked the nation’s capital this past spring after George Floyd died at police hands in Minneapolis.

Floyd’s family and the families of other Black Americans who were victims of police violence were expected to participate Friday in a commemoration of the 1963 March on Washington that is being led by the Rev. Al Sharpton and Martin Luther King III.

Before Trump spoke, there was a brief standoff between police and demonstrators, who shouted anti-police slogans. “Free the people, fight the power,” they chanted. Nearby protesters set up a small guillotine, with the District of Columbia flag as the blade.

Lafayette Park, a traditional site of demonstrations across from the White House, was sealed off and there were some street closures.

The groups ShutdownDC and Long-Live Go-Go had put out word in advance about the planned “noise demonstration and dance party” to coincide with Trump’s speech.

“We’ll be at the White House on Thursday to drown out (Trump’s) racist rhetoric with another vision for the future of our country,” the groups said in a statement.

A longtime D.C. signature sound, Go-Go music emerged last year as a battle anthem for activists fighting fast-moving gentrification in the nation’s capital. The music has been a regular presence in recent protests against racial injustice and rolling Go-Go trucks with live bands have appeared frequently at the epicenter of the protests, which was renamed by the city as Black Lives Matter Plaza