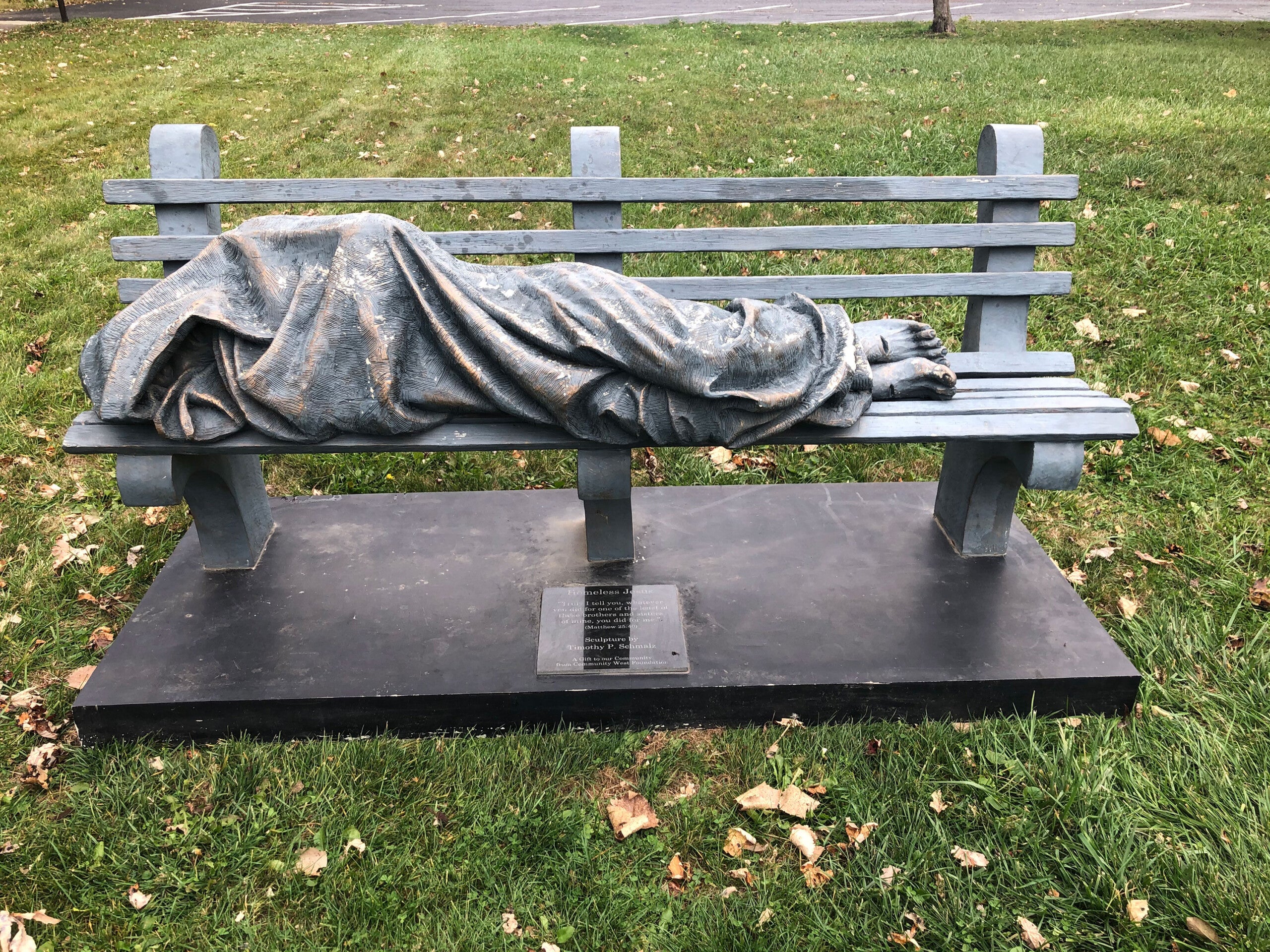 (CNN) — Father Alex Martin hoped that the realistic statue of a homeless Jesus outside his church would inspire conversations about how to care for people in need in his tight-knit Ohio community.

It’s definitely gotten people talking, especially after someone called the police to report a man sleeping on a bench near St. Barnabas Episcopal Church in Bay Village, Ohio.

The “Homeless Jesus” statue was created by Canadian sculptor Timothy Schmalz and depicts Jesus huddled under a blanket on a bench. His head is covered and his bare feet are sticking out — displaying the wounds from his crucifixion.

Martin said a police officer came to the church on Oct. 12, about 20 minutes after the statue was installed.

People in Bay Village, a Cleveland suburb of 15,000, generally look out for each other, he said.

“I very much want to give the caller the benefit of the doubt that they were genuinely concerned and called out of compassion for someone who they didn’t know,” the priest told CNN.

The city has a median household income of $102,917 and only 2.8% of residents are in poverty, according to the US Census Bureau.

“It’s a place where seeing someone sleeping on a park bench would be jarring,” Martin said.

He said the officer was very professional and wanted to learn more about the statue and its goals and meaning.

The statue belongs to Community West Foundation, a nonprofit that cares for homeless men, women and families and other people in need in the greater Cleveland area.

The statue has been on display at several churches in the community and will be at St. Barnabas until Dec. 1, Martin said.

The group says the statue is an embodiment of the Gospel passage in Matthew 25:40 — “Truly I tell you, whatever you did for one of the least of these brothers and sisters of mine, you did for me.”

Bay Village Police Chief Kathy Leasure said in a statement that officers are trained to help people who are homeless and encouraged residents to call when they see something unusual.

“Had there been a person laying on a bench, our officers are trained first responders and would be able to assess the situation and take the appropriate action. Our officers are able to render first aid in a medical emergency or assist with securing emergency shelter,” she wrote.

The church is next to a park and the statue was installed near a walking path where it can be seen by walkers and people enjoying the outdoors.

“I’ve been very pleased that the overwhelming reactions, both within the congregation and within the neighborhood and the folks in the community, has been overwhelmingly positive,” Martin said. “People have been grateful to be given an opportunity to have conversations about how we can best serve those who are in great need, conversations about the sacred worth and dignity of all human life, even that which is often cast aside by society.”

Martin said the St. Barnabas has gotten donations from people all over the country, who’ve heard about the statue and wanted to help.

He said that money will go to the Community West Foundation and Episcopal organizations helping homeless people in the area.