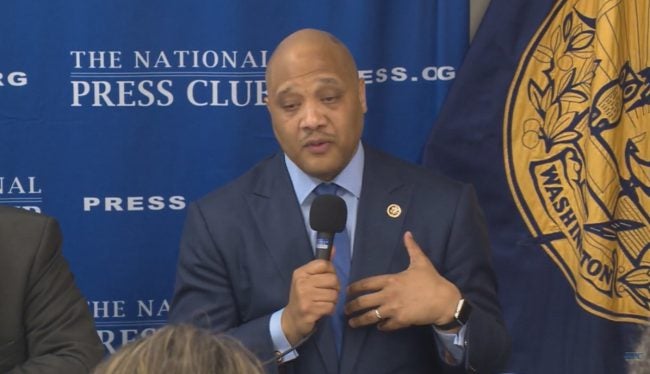 WASHINGTON, D.C. (WISH) — Muslim Americans lack political leverage and need to get more involved. That’s the message from Indiana Congressman Andrٞé Carson, who is speaking up against Islamophobia

Rep. Carson is one of two Muslims in Congress. The other is Keith Ellison of Minnesota and they teamed up Tuesday at the National Press Club to challenge religious stereotypes and what they call cultural ignorance.

“André and I are first in line to say that if somebody commits an act of terrorism and they say they do it because of Islam,” said Ellison, “prosecute them to the fullest extent of the law.

Their main concern is Donald Trump.

The presumptive nominee for the Republican Party has called for a ban on Muslim travel to the U.S. and declared that Islam hates us.

Carson calls him a bully.

“Anyone who has dealt with a bully knows that once you give up your lunch money,” he said, “it will never stop.”

They took the opportunity to challenge the media.

“To hold our candidates accountable when they make these kinds of inflammatory remarks,” said Carson.

But they also delivered political messages of their own. Ellison is a Bernie Sanders supporter. Carson backs Hillary Clinton.

“Once she becomes President,” said Carson, “you will see Muslims in very important positions in her cabinet.”