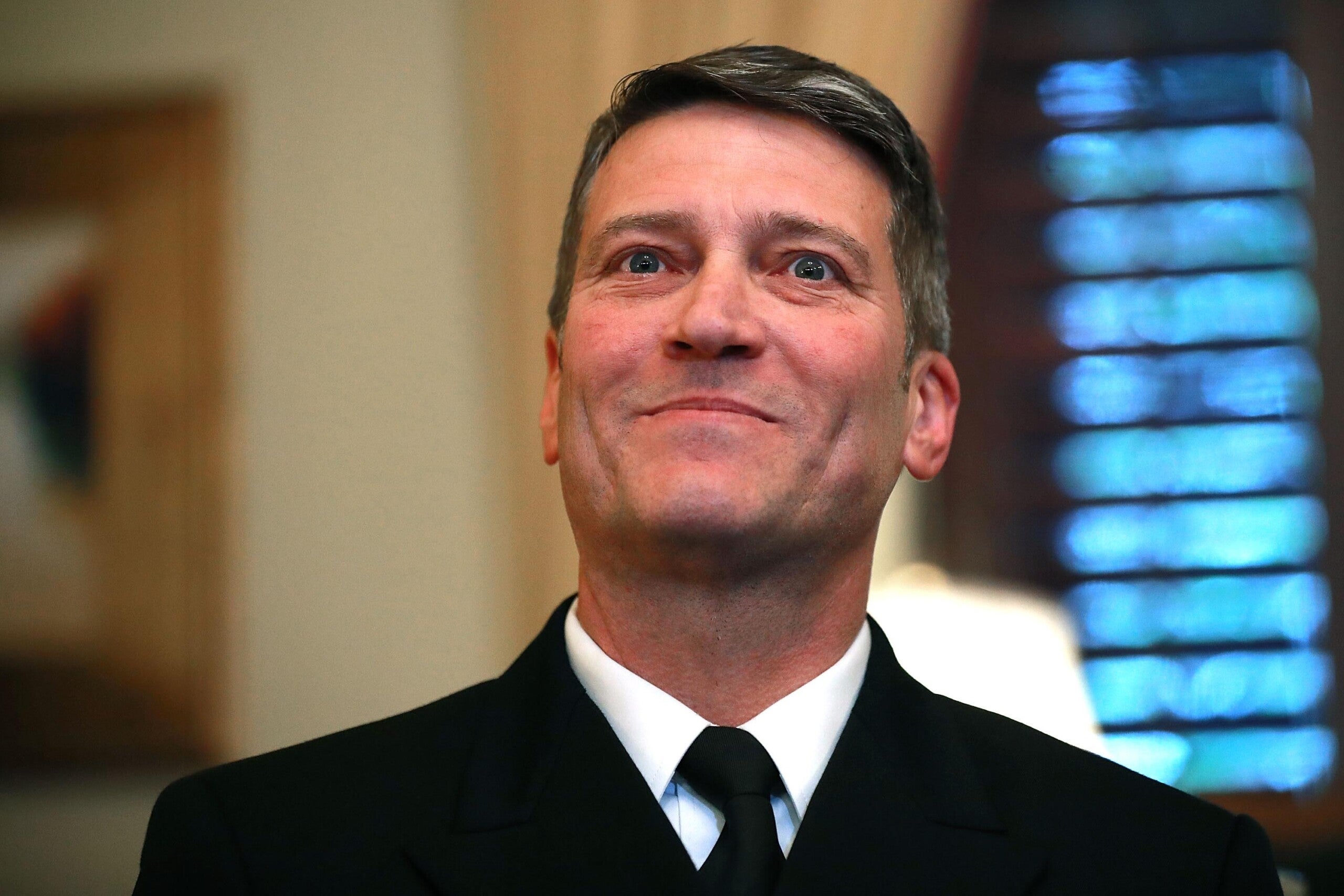 (CNN) — The Department of Defense inspector general has issued a scathing review of Rep. Ronny Jackson during his time serving as the top White House physician, concluding that he made “sexual and denigrating” comments about a female subordinate, violated the policy for drinking alcohol while on a presidential trip and took prescription-strength sleeping medication that prompted concerns from his colleagues about his ability to provide proper care.

The findings outlined in the report, which was obtained by CNN prior to its expected release on Wednesday, stem from a years-long IG investigation into Jackson — who currently represents Texas in the House of Representativesand sits on the House Armed Services subcommittee overseeing military personnel — that was launched in 2018 and examines allegations that date back to his time serving during the Obama and Trump administrations. Members of Congress were briefed on the IG report findings on Tuesday, according to two sources familiar with the matter.

Jackson claimed the report was politically motivated in a statement to CNN on Tuesday, saying the inspector general “resurrected” old allegations against him because he refused to “turn my back on President (Donald) Trump,” who was a vocal supporter of his 2020 congressional bid. He also told CNN he rejects “any allegation that I consumed alcohol while on duty.”

After interviewing 78 witnesses and reviewing a host of White House documents, investigators concluded that Jackson, who achieved the rank of Rear Admiral, failed to treat his subordinates with dignity and respect, engaged in inappropriate conduct involving the use of alcohol during two incidents and used sleeping medication during an overseas trip that raised concerns about his ability to provide medical care to the President and other top officials, according to the report.

The report also notes that the investigation into Jackson “was limited in scope and unproductive” as White House counsel under Trump insisted on being present at all interviews of current White House Medical Unit employees, which had a “potential chilling effect” on the probe.

“We determined that the potential chilling effect of their presence would prevent us from receiving accurate testimony,” the report states, adding that fieldwork stopped for about 10 months, between October 11, 2018, and August 22, 2019, as the Department of Defense inspector general and White House counsel determined whether the White House would invoke executive privilege, which they ultimately did not do.

Still, the conclusions about Jackson’s conduct are striking. Allegations about his explosive temper and creating a hostile work environment are consistent throughout his time in both the Obama and Trump administrations as an “overwhelming majority of witnesses (56) … who worked with RDML Jackson from 2012 through 2018 told us they personally experienced, saw, or heard about him yelling, screaming, cursing, or belittling subordinates,” the report says.

“Many of these witnesses described RDML Jackson’s behavior with words and phrases such as ‘meltdowns,’ ‘yells’ for no reason,’ ‘rages,’ ‘tantrums,’ ‘lashes out,’ and ‘aggressive.’ These witnesses also described RDML Jackson’s leadership style with terms such as ‘tyrant,’ ‘dictator,’ ‘control freak,’ ‘hallmarks of fear and intimidation,’ ‘crappy manager,’ and ‘not a leader at all,'” it adds.

On a presidential trip to Manila from April 22, 2014, to April 29, 2014, four witnesses who traveled with then-President Barack Obama and Jackson said that Jackson became intoxicated and made inappropriate comments about a female medical subordinate.

A witness interviewed by the IG said that shortly after arriving in Manila, Jackson began drinking in the hotel lobby, then got into a car with a drink in his hand “to go out on the town.” Another witness said he could smell alcohol on Jackson’s breath later that evening. Back at the hotel, one of the witnesses said he saw Jackson “pounding” on the door of his female subordinate’s room. When she opened the door, Jackson said, “I need you,” and, “I need you to come to my room.”

Two years later, in Bariloche, Argentina, two witnesses told the IG they saw Jackson drinking a beer while he was serving as the physician to the President and in charge of providing medical care for a presidential trip, despite regulations prohibiting him from 24 hours before the President’s arrival until two hours after he left. Jackson, the witnesses said, dismissed the regulation as “ridiculous.” Another witness said Jackson later smelled of alcohol, though she was unsure if he was drunk. One witness, identified in the report as “Bariloche Witness 5,” said he did not smell alcohol on Jackson during the trip.

These two allegations of alcohol use both occurred under the Obama administration, but the report details a series of incidents under both Obama and Trump in which Jackson lost his temper, cursing at subordinates.

Of the 60 witnesses interviewed by the Defense Department IG about the command climate under Jackson, only 13 had positive comments, while 38 spoke about unprofessional behavior, intimidation and poor treatment of subordinates.

One witness said that Jackson “established a workplace where fear and intimidation were kind of the hallmarks of him, his command, and control of his subordinates.”

At least six witnesses, all of whom were medical personnel, also told investigators that Jackson took Ambien, a prescription medicine used to treat insomnia, on long flights while on duty for providing medical care for government officials, including the President. The witnesses said they were concerned about the Ambien because it often leaves uses drowsy and can impair someone’s mental alertness. But the IG report notes there is no specific restriction on the use of Ambien during long flights. It recommends that the White House Military Office put out guidance on the appropriate use of Ambien and similar drugs.

The report did not, however, substantiate an allegation that Jackson had wrecked a government vehicle — a claim that had added to the collapse of his bid to lead the Department of Veterans Affairs under Trump.

Jackson retired from the Navy in 2019 while the watchdog investigation was still ongoing, but two defense officials have told CNN that he could now face a Navy review of his retirement pay. Officer retirement pay is based on the most senior rank at which a person served honorably. If the report findings validated less than honorable behavior, Jackson could have his retirement pay reduced.

The IG report recommends that the secretary of the Navy take “appropriate action” regarding Jackson.

“We recommend that the WHMO Director issue fitness for duty guidance regarding the appropriate use of Ambien and similar drugs while medical personnel are on duty or on call to provide emergency medical services,” it says.

In his statement to CNN on Tuesday, Jackson said that “Democrats are using this report to repeat and rehash untrue attacks on my integrity.”

“I’m proud of the work environment I fostered under three different Presidents of both parties; I take my professional responsibility with respect to prescription drug practices seriously; and I flat out reject any allegation that I consumed alcohol while on duty,” Jackson said.

“My entire professional life has been defined by duty and service. I’ve honorably served my country in the U.S. Navy, served patients who trusted me with their care, served three Presidents in the White House, and now I serve the people of Texas’ 13th District in Congress. I have not and will not ever conduct myself in a way that undermines the sincerity with which I take my oath to my country or my constituents,” he added.

CNN previously reported that the IG probe centered around allegations that Jackson was periodically intoxicated and mishandled prescription drugs.

Trump re-nominated Jackson to receive a second star — a bump in his military rank — in February 2019, though that promotion was not approved by the Senate. This came less than a year after Jackson withdrew from consideration as Trump’s nominee for secretary of Veterans Affairs over allegations that he was “abusive” toward colleagues, loosely handled prescription pain medications and was periodically intoxicated. Jackson had denied all of the allegations leveled against him, calling them “completely false and fabricated.”