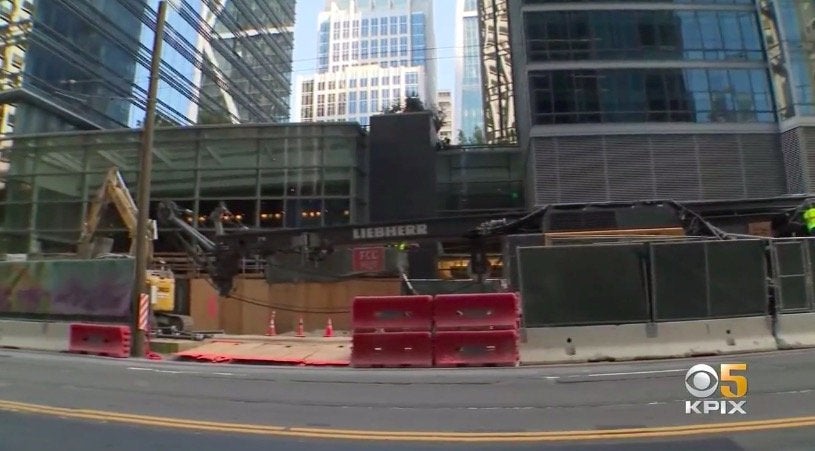 There were two fixes proposed for the leaning, sinking Millennium Tower. The first, an internal fix, would have screwed pilings through the foundation of the building. It was designed by a New York firm that rebuilt the World Trade Center. (Photo from KPIX via CNN)
by: Andria Borba
Posted: Aug 27, 2021 / 11:28 PM EST / Updated: Aug 27, 2021 / 11:30 PM EST

SAN FRANCISCO (KPIX) — There were two fixes proposed for the leaning, sinking Millennium Tower. The first, an internal fix, would have screwed pilings through the foundation of the building.

It was designed by a New York firm that rebuilt the World Trade Center.

The second fix — which has now been put on pause — would place external pilings along Mission and Fremont streets to support up to half of the building’s load.

Lawrence Karp is a geotechnical engineer and professor at UC Berkeley. He was asked by the city of San Francisco to study both plans. He submitted a letter to the board of supervisors and then director of the department of building inspection, Tom Hui, which stated that the internal fix was the superior plan.

“The incorrect plan was fraught with all sorts of difficulties,” Karp told KPIX 5.

The external fix is happening on the weak, northwest side of the building — the direction that Millennium Tower is already leaning.

“You never place piles or piers closer than three pier diameters apart. These are 36 feet so they should be nine feet apart and they’re, what? — five feet or something. As you do one, you’re disturbing the ground, then you go to the next one you’re disturbing the ground there and you go to the next one until you have a whole zone of disturbance that can’t be fixed,” Karp explained.

He looked at the observation, instrumentation and monitoring reports that were released in early August. “Those reports showed that 26 percent of the leaning has occurred in the last year.”

Karp says while the stabilization work has stopped at 301 Mission Street, the leaning and sinking has not. “This movement we see in the last couple of months is just beginning. It’s not going to all of a sudden stop. It doesn’t work that way. It’s getting a momentum and where there’s lost ground around the pile cages.”

“One of the ways they were able to sell this stabilization is that they said it would improve seismic response. But, actually that’s not true, because the forces come through from the ground and they hit the base of the building and they depend upon a uniform structure,” Karp said.

Karp maintains the external fix is not balanced and a quake could exacerbate that.

“Where the strong motion comes from that will cause that building to rotate,” said Karp. “The weak part will move and the strong part will stay there. Which causes more loads and it could be disastrous.”