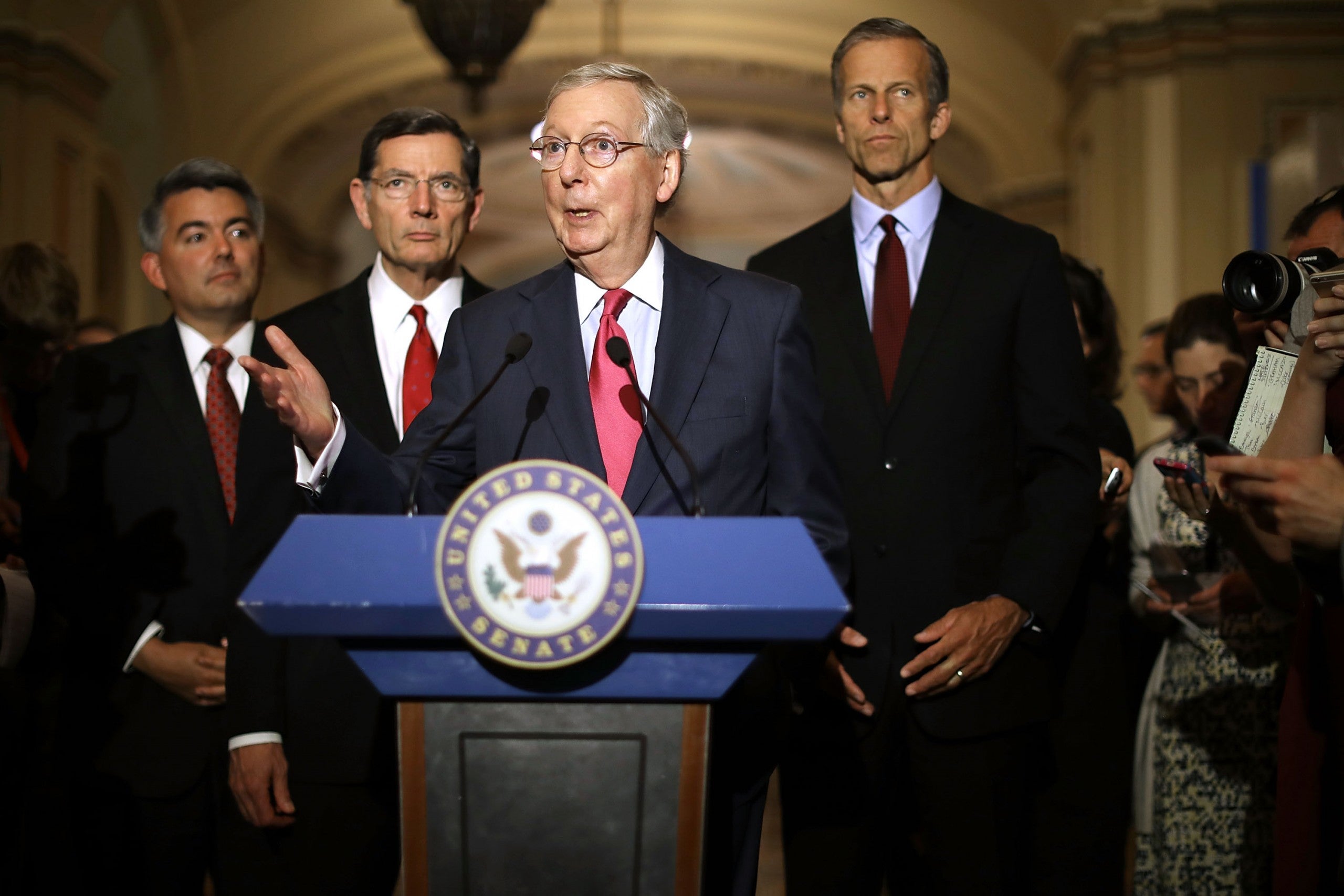 Senior Republicans are making clear they have little interest in moving forward with a sweeping January 6 investigation in part because a detailed probe could become politically damaging and amount to a distraction for their party just as control of Congress is at stake in next year's midterm elections. (Chip Somodevilla/Getty Images via CNN)
by: Manu Raju, CNN Chief Congressional Correspondent
Posted: May 19, 2021 / 12:43 PM EST / Updated: May 19, 2021 / 12:44 PM EST

(CNN) — Senior Republicans are making clear they have little interest in moving forward with a sweeping Jan. 6 investigation in part because a detailed probe could become politically damaging and amount to a distraction for their party just as control of Congress is at stake in next year’s midterm elections.

Publicly and privately, Republicans are making that case, with Senate GOP Whip John Thune noting that there’s concern among some GOP members that the findings of the probe “could be weaponized politically and drug into next year.”

“I want our midterm message to be on the kinds of things that the American people are dealing with: That’s jobs and wages and the economy and national security, safe streets and strong borders — not relitigating the 2020 elections,” Thune told CNN. “A lot of our members, and I think this is true of a lot of House Republicans, want to be moving forward and not looking backward. Anything that gets us rehashing the 2020 elections I think is a day lost on being able to draw a contrast between us the Democrats’ very radical left-wing agenda.”

Thune’s comments came moments after Senate GOP Leader Mitch McConnell announced his opposition on the floor, contending it would duplicate ongoing probes and contending the deal — which was reached between a House Republican and House Democrat — is designed to find a conclusion that would be in “Democrats’ hands.”

The commission would be structured so 10 members — chosen equally between the leaders from both political parties — could report by year’s end on what happened on January 6, as well as the “influencing factors” behind it.

It’s clear that such an investigation would also look at then-President Donald Trump’s role in promoting the Jan. 6 “Stop the Steal” rally, his lies that the election was stolen and his efforts to subvert the will of voters. Moreover, it could put an uncomfortable focus on some conservative GOP senators and House members who sought to overturn the election results in Congress, while keeping the issue front-and-center as the investigation plays out over the next year.

And there are ample questions about whether House GOP Leader Kevin McCarthy would be forced to testify to explain what Trump was saying on Jan. 6 given the two spoke during a heated phone call that day.

“It would be a distraction,” one senior GOP source told CNN, arguing any investigation should also look at left-wing extremism as well.

While the bill is expected to pass the House on Wednesday, it’s an open question whether it will pass the Senate, where 60 votes would be needed to break a GOP filibuster.

Thune, the chief GOP vote counter, said they haven’t taken the caucus’ temperature yet on the plan.

“I would say that there’s a skepticism about what’s happening in the House right now and whether or not what comes out is a proposal that will be fair.”

Sen. Gary Peters, who chairs the Democratic Senatorial Campaign Committee, said there’s a reason why Republicans are battling the commission.

“They’re afraid of the truth because it puts them on the wrong side of what is right,” Peters, a Michigan Democrat, said Wednesday.