Retired fighter goes from prison to opening an MMA gym 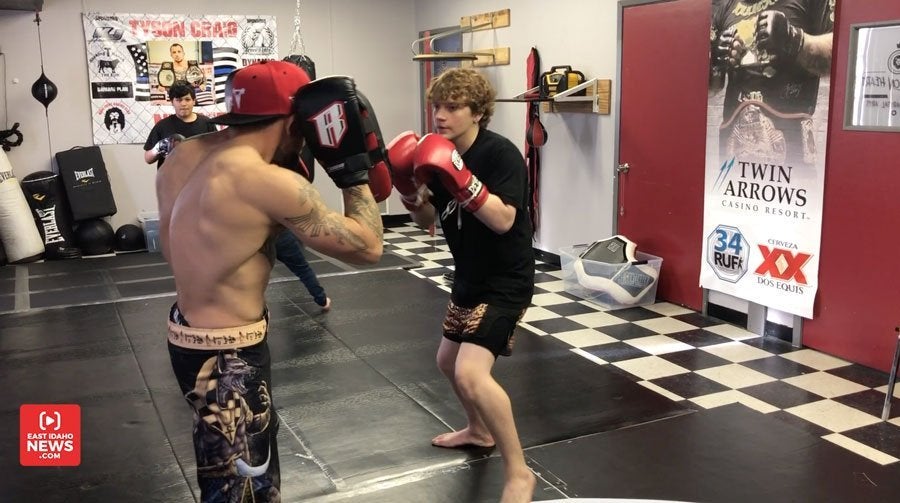 He opened Team Lionheart MMA at 510 Second St. in September. Barnes is a retired UFC fighter and he tells EastIdahoNews.com interest in the sport has increased exponentially since he opened.

“I started doing it out of my garage,” Barnes says. “I was just going to train kids, but because I’m a fighter, people started asking ‘Can you train me?’ I wasn’t planning on doing all this at first but … I love this.”

He started the business with his associates, Tyson Craig and Luiz Cortez, who also fight professionally.

Since opening, he’s acquired about 30 students total. He and his partners teach a basic MMA class and a kids class, which focuses on the fundamentals of fighting. There is also a women’s kickboxing class and a fight team, which trains to fight competitively.

“It’s not just training them to fight. It’s teaching them the discipline of how to be a fighter,” Barnes says. “I have rules with my kids. If they drop their grades, they can’t train or they have to come and do burpees. If they’re disrespectful to their parents, they have to do burpees (as well).”

There is no age limit to enroll. Kids as young as 5 can learn. The oldest student is 65.

Dominic Vedro, 16, started taking fight courses about a month ago. He’s never fought competitively but he’s currently training with the team in hopes of doing so.

“From the second I walked through the door, these guys treated me like family. I realized (I might) have a future as a fighter,” Dominic says. “My ultimate goal is to become the best fighter of all time.”

Barnes’ gym occupies the west side of the building. Most of the building is used as office space for other businesses. It sat vacant for many years prior. It was once a Veterans hospital and more recently served as a seminary building for Idaho Falls High School students.

Barnes has fond memories of this building and that’s what inspired him to open a gym in this location.

“This is where the three of us (Craig and Cortez) met and started training together,” says Barnes. “It was a little spot like this just down the road from here. Champions came out of there.”

Barnes fought professionally for about 11 years and won several awards. His proudest accomplishment is winning a fight in Utah several years ago just a few days after his mom passed away.

“I didn’t want to fight (that day), but I (mustered) the courage to do it and I went in and beat the guy (quickly),” he says. “It felt like my mom was in there with me. It was weird.”

A tattoo on his neck symbolizes a guardian angel, which Barnes got in memory of his mom.

In many ways, becoming a professional fighter serves as a metaphor for Barnes’ life. He spent four years in state prison on burglary charges. He recalls spending lots of time alone in isolation and committing himself to make better choices when his sentence was complete.

After getting out of prison, he remembers watching an MMA fight with his cousin and getting instantly hooked.

“I wanted to try this,” says Barnes. “I went in there and fought and it was the best emotional feeling. It was just an adrenaline rush and I’ve been in love with it ever since.”

Fighting has become a healthy outlet for Barnes, and after all these years, he says he’s kept the promise he made to himself while living behind bars.

“I haven’t even gotten a speeding ticket,” he says.

After sustaining multiple injuries in fights over the years, including tearing his ACL, he decided to retire last year. Though he’s a little worse for the wear, he says he’s happy to pass on the skills he’s learned to others.

Barnes went to high school with TikTok star Nathan Apodaca (Doggface208), who hosted a fundraiser meet and greet at Team Lionheart in November. Apodaca raised more than $600 for Barnes’ gym.