Revamped OxyContin was supposed to reduce abuse, but has it? 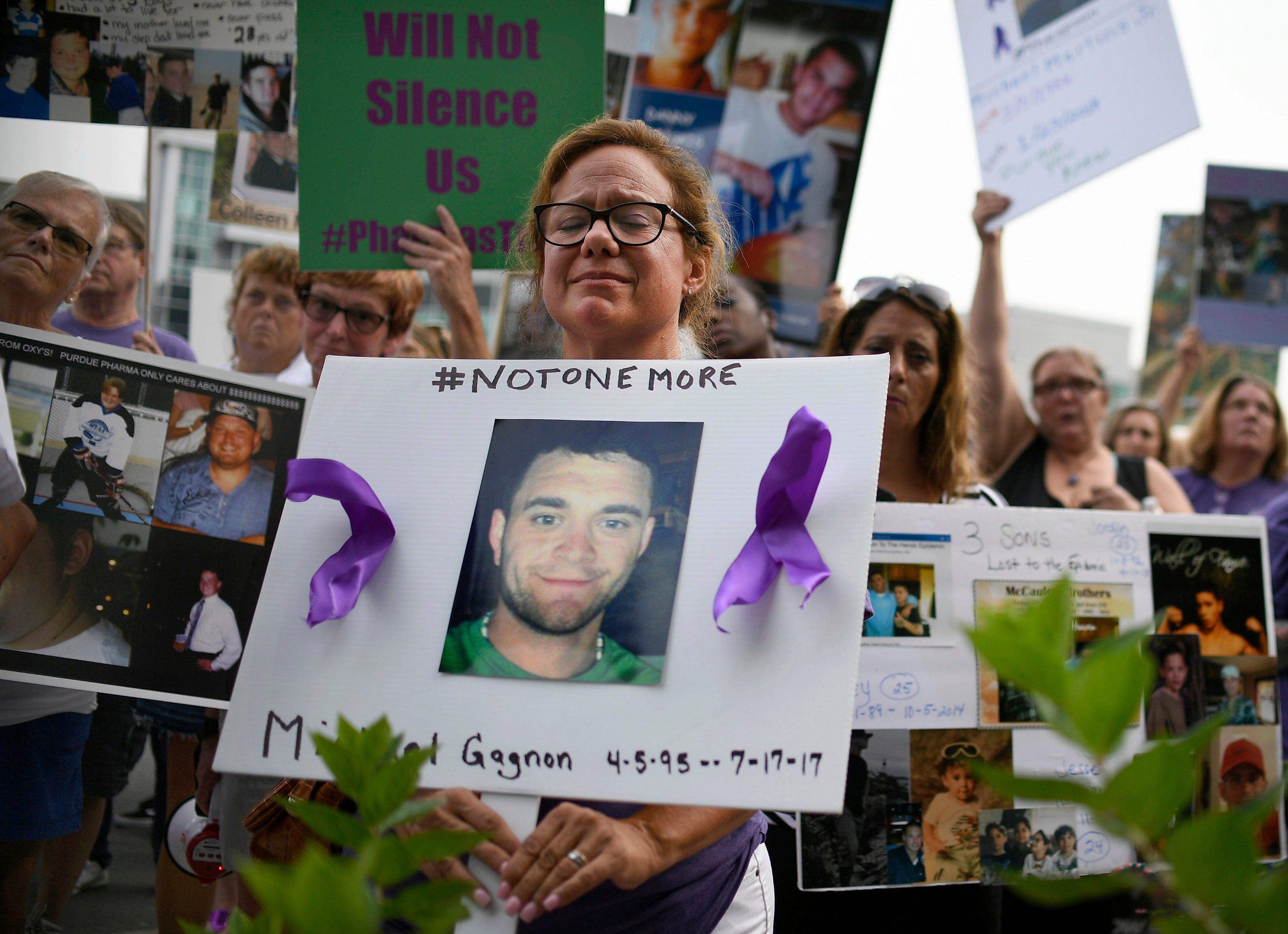 FILE - In this Aug. 17, 2018 file photo, Christine Gagnon, of Southington, Conn., holds a sign during a protest with others who have lost loved ones to OxyContin and opioid overdoses, outside the Purdue Pharma headquarters in Stamford, Conn. Gagnon lost her son Michael 13 months earlier. Nearly ten years ago, the blockbuster painkiller OxyContin was reformulated to discourage abuse by snorting and injecting, but it's unclear whether the harder-to-abuse format has decreased cases of addiction, overdose and death. (AP Photo/Jessica Hill, File)
by:
Posted: Jul 22, 2019 / 01:53 PM EST / Updated: Jul 22, 2019 / 03:09 PM EST

An expert in pain treatment at the University of Kentucky, Brown led a panel of outside experts advising the Food and Drug Administration on opioids that have been reformulated to deter snorting and injecting.

There’s just one problem: Neither the company that makes OxyContin nor the FDA has allowed the experts to see data on whether it reduces abuse.

“We asked for that data probably 40 or 50 times in last four or five years and were denied every time,” said Brown, whose term as an FDA adviser ended in March.

Nearly a decade ago, the FDA approved reformulated OxyContin and told the company, Purdue Pharma, that it would be evaluated on whether the new version decreased cases of addiction, overdose and death. The data submitted by Purdue to answer that question remains secret.

“It’s in the public interest that we all know what these drugs are doing and yet none of us can see it, which is really terrifying when you think about it,” Brown told The Associated Press.

In 2015, Brown and his colleagues were supposed to review follow-up data on OxyContin at a meeting in Washington, but the FDA canceled it only days before. Purdue had pulled its application to update OxyContin’s label with new information on abuse, saying it wanted more time to analyze the data. Such meetings are typically planned months in advance and are almost never canceled.

A Purdue spokesman said the Stamford, Connecticut-based company has been working to complete four updated study requirements assigned by the FDA in 2016. Purdue expects to complete that work this year.

“Once all of the studies are completed and FDA has had the opportunity to review the results, we will evaluate options to disseminate this important data to the scientific community,” said Bob Josephson, in a statement.

But the FDA’s top staffer for opioids said at a public meeting last year that the agency expected the information to become available “years ago.”

“They have it, but it’s hard for us to force them to submit it,” said Sharon Hertz, FDA’s division director for pain medications.

The unreleased OxyContin data highlights the FDA’s precarious role as both a public health agency and close confidante of industry. While the agency can order a drugmaker to research important questions, the information itself still belongs to the company and is deemed “confidential commercial information.”

An FDA spokeswoman said in an email that it would be “premature” to comment on Purdue’s results before they have been fully submitted and reviewed. The agency noted that the company’s final OxyContin study has been delayed. FDA staffers expect the studies “will help us understand the real-world impact of OxyContin’s reformulation on abuse,” said Lyndsay Meyer.

OxyContin remains the best-selling opioid brand in the country, but it accounts for less than 2 percent of U.S. opioid prescriptions, potentially limiting its impact on national trends. (Most opioids prescribed are low-priced generic pills.)

Since the new formulation was approved in 2010, fatal overdoses involving prescription opioids including OxyContin, Percocet and generic pills have risen more than 30 percent to about 14,500 in 2017, the most recent year for which complete data is available. Preliminary figures released last weeksuggest drug-related deaths likely fell last year for the first time in decades.

Some researchers have suggested reformulated OxyContin, combined with tighter prescribing and other measures, accelerated the nationwide shift toward heroin and fentanyl. Those drugs were involved in more than 43,000 overdose deaths in 2017, nearly three times the number as prescription opioids.

The FDA has now approved seven opioids, including OxyContin, with labeling that they are “expected” to discourage abuse.

Those pills are intended to be difficult to crush, break or dissolve, but they can still be misused when simply swallowed. And the drugs carry the same addiction risks.

“The real problem with opioids from the public health perspective is addiction,” said Dr. Lewis Nelson, a Rutgers University emergency medical specialist who also serves as an FDA adviser. “These pills in the reformulated version don’t do anything to reduce the likelihood or magnitude of addiction.”

Purdue has published preliminary information on reformulated OxyContin in peer-reviewed journals, but the studies are clouded by potential biases and limitations. Many are written by Purdue scientists or researchers whose work is funded by the company. In most cases, the data comes from a network of specialized sources, including poison control centers, law enforcement records and drug rehabilitation clinics.

But even the study authors acknowledge that those measures don’t necessarily reflect what’s happening across the country. Only a small segment of people misusing opioids ever enter rehabilitation, for instance.

When FDA researchers decided to independently examine OxyContin abuse in a study using a much larger dataset — a federal government annual survey — they found a different picture. Among people with a history of misusing prescription opioids, rates of OxyContin abuse were similar or higher three years after the drug was reformulated.

“If you were going to see an impact, this is the population where you should see it. And we didn’t see anything,” said Dr. Christopher Jones, who co-authored the 2017 paper and now works at the Centers for Disease Control and Prevention.

The paper’s findings square with survey results suggesting less than 5 percent of long-term abusers gave up OxyContin after it was reformulated.

Garrett Hade of Los Angeles said that when he was addicted to opioids it would take him only a few minutes in his kitchen to prepare OxyContin for injecting.

“It just became a matter of ‘this is what you have to do today because you have abuse-deterrent OxyContin,’” said Hade, 32, who is in recovery.

THE CONTINUING COST OF OXYCONTIN

First launched in 1996, the original OxyContin helped spark a wave of abuse as some people quickly learned to crush the long-acting pills to release a massive opioid dose. Under pressure from regulators, politicians and law enforcement, Purdue reformulated the painkiller in 2010.

Government data unveiled last week showed Purdue and other drugmakers flooded the U.S. with more than 76 billion opioid pills between 2006 and 2012. Areas that received the most pills also had the highest overdose rates.

Today, Purdue faces some 2,000 local and state lawsuits alleging its aggressive marketing contributed to the opioid epidemic by downplaying OxyContin’s addiction risks and promoting the drug for common pain ailments. The lawsuits have pushed the company to publicly discuss bankruptcy .

The reformulation has been good for business.

The patent on original OxyContin would have expired in 2013, allowing lower-priced generics to gobble up Purdue’s market share. By reformulating the drug, Purdue was able to extend its patent until 2030.

Since 2010, OxyContin has generated more than $21 billion in U.S. sales, according to pharmaceutical tracking service IQVIA.

Purdue viewed the anti-abuse reformulation as a “key driver” of new prescriptions and stressed the features in promotions to doctors, according to its marketing materials. Purdue stopped promoting OxyContin directly to doctors last year amid mounting scrutiny.

Meanwhile Purdue has steadily increased OxyContin’s price more than 95 percent, to $22 per pill for the drug’s highest dose, according to data firm Elsevier.

Whether the drug’s anti-abuse features warrant those costs has been debated.

The nonprofit group Institute for Clinical and Economic Review has found mixed evidence for OxyContin’s ability to fight abuse.

Now president of the nonprofit Center for Science in the Public Interest, Lurie notes that OxyContin is by far the most prescribed and most studied abuse-deterrent opioid.

“If we can’t prove it for OxyContin, how are we going to show it for anything else?” he asked.