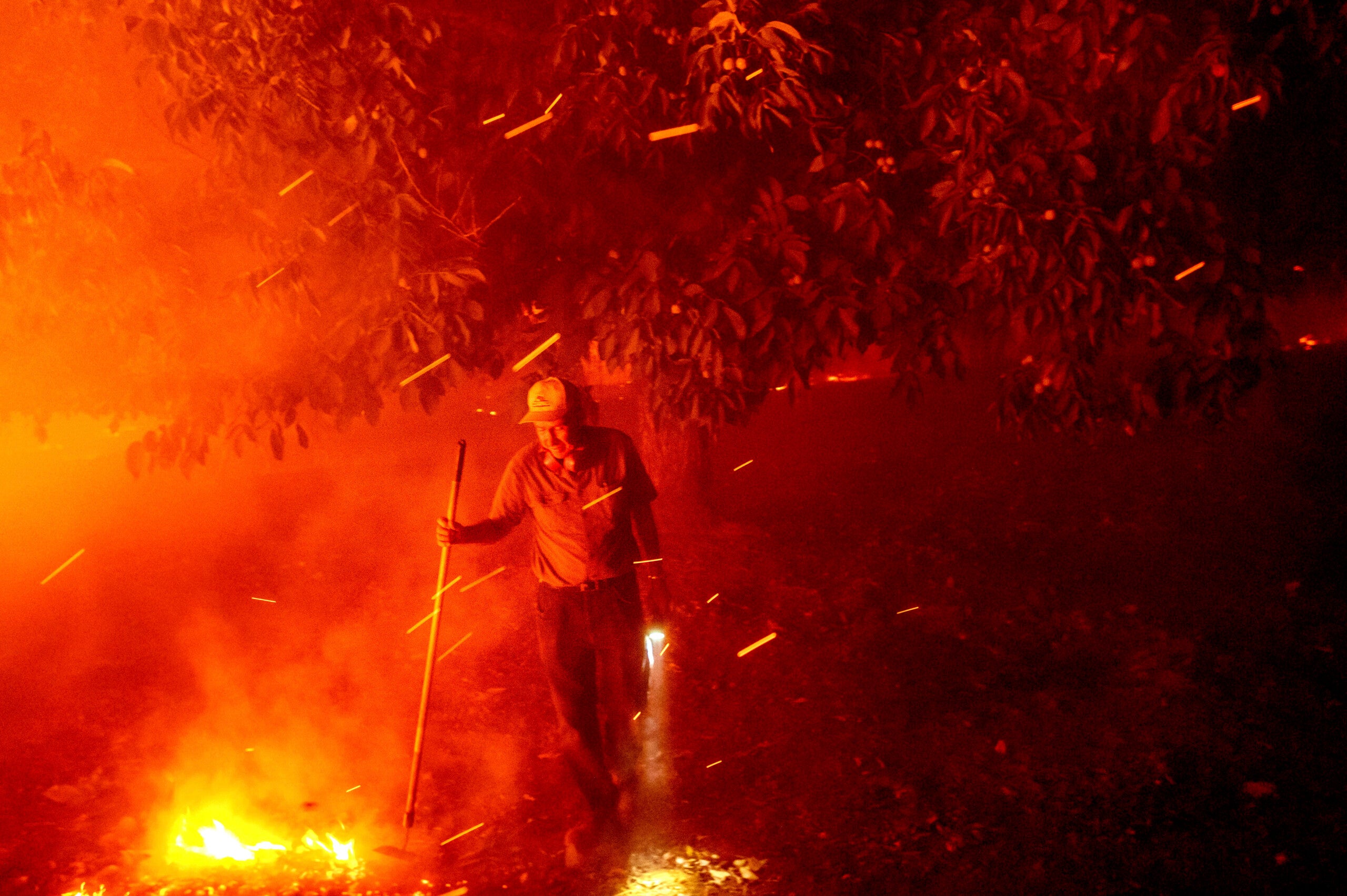 Bill Nichols, 84, works to save his home as the LNU Lightning Complex fires tear through Vacaville, Calif., on Wednesday, Aug. 19, 2020. Nicols has lived in the home for 77 years. Fire crews across the region scrambled to contain dozens of wildfires sparked by lightning strikes as a statewide heat wave continues. (AP Photo/Noah Berger)
by: JULIET WILLIAMS Associated Press
Posted: Aug 19, 2020 / 10:43 AM EST / Updated: Aug 19, 2020 / 10:43 AM EST

SAN FRANCISCO (AP) — Thousands of people were under orders to evacuate in regions surrounding the San Francisco Bay Area Wednesday as nearly 40 wildfires blazed across the state amid a blistering heat wave now in its second week. Smoke blanketed the city of San Francisco.

Police and firefighters went door-to-door early Wednesday in a frantic scramble to warn residents to evacuate as fire encroached on Vacaville, a city of about 100,000 that lies between San Francisco and Sacramento. Fire officials said at least 50 structures were destroyed and 50 damaged, and four people were injured.

Television footage showed some homes in flames and thick ash dropping in a rural area near Interstate 80 as the fire appeared to head toward more densely populated areas.

Diane Bustos told KPIX-TV that she and her husband tried to drive out but their vehicle caught on fire and they had to flee on foot.

“I got all these flames on me and I lost my shoe, but I made it. God saved me,” she said.

The California Department of Forestry and Fire Protection said the blaze was exhibiting “extreme fire behavior” and challenging firefighters.

To the south in San Mateo and Santa Cruz counties, about 22,000 people were ordered to evacuate because of a fire that was burning in dense wooded parkland but threatened communities, Cal Fire spokesman Jonathan Cox said.

“This is a very active timber fire burning in two counties with a serious threat to both public safety and for structures that are out in front of it,” he said.

Thousands of homes and businesses were also threatened in the wine-growing counties of Napa and Sonoma in an area devastated by a series of deadly blazes in the last three years. At least seven fires were grouped together as one of two major Lightning Fires in Northern California, a nod to their origins just a day earlier.

Powers said much of the fire was burning through rural areas with steep terrain, making it difficult to get crews in.

In Napa County, Gail Bickett, 80, loaded up her three dogs in a truck to evacuate as the fire burned behind houses across the road, the San Francisco Chronicle reported.

In the East San Francisco Bay, a cluster of 20 separate lightning-sparked fires threatened about 1,400 structures in rugged terrain with dense brush. Strong winds and low humidity made the firefight challenging.

Blazes engulfed rural and forest areas near the San Francisco Bay Area, near Salinas in Monterey County, around Oroville Dam north of Sacramento, forested areas west of Silicon Valley, in remote Mendocino County and near the Nevada state line north of Lake Tahoe.

Several also were burning in northern coastline areas and in Southern California.

The cluster of wine country fires threaten an area that only last year grappled with another massive blaze that forced 200,000 to flee — a task made more complicated this year because of the pandemic.

Tuesday afternoon, the fire was moving toward an area called Atlas Peak that burned in 2017 in a blaze that killed six people and destroyed nearly 800 buildings. The California Highway Patrol said helicopter crews were unable to do rescues in the area because the smoke was too thick to fly in.

Robin Sisemore hosed down vegetation in front of her mother’s adjacent house. Both homes were new, replacing ones that burned just three years ago.

To the south, evacuations were ordered for all of Boulder Creek to the west of Silicon Valley, a community of 5,000 high in the Santa Cruz mountains where windy, long, forested roads, some paved, some dirt, can easily become blocked during storms or fires.