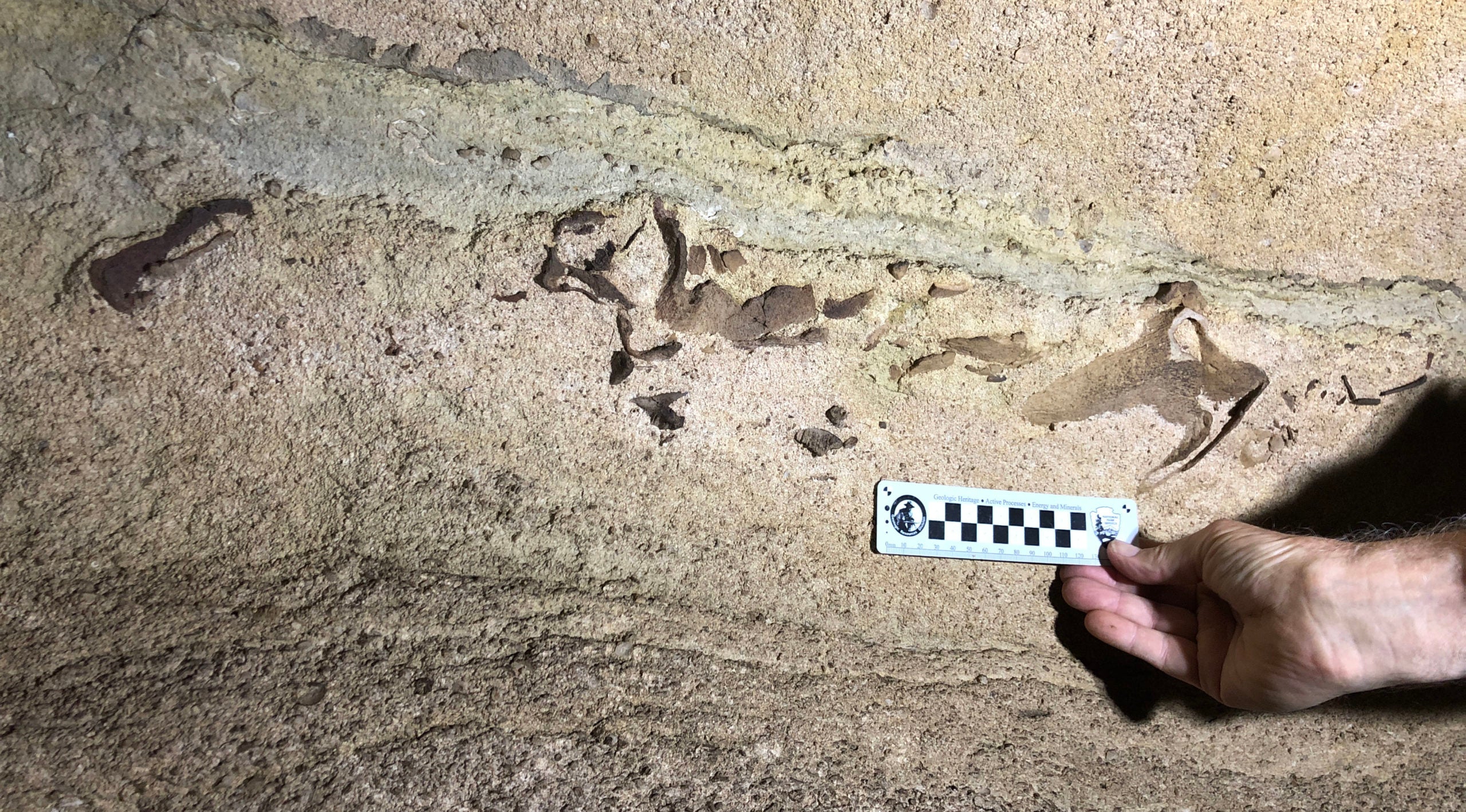 (CNN) — Kentucky’s Mammoth Cave National Park is a long way from the ocean, but newly discovered fossils suggest the area was once teeming with sharks.

Scientists have identified the remains of 15 to 20 different species of sharks deep in the cave, including part of the head of a great white-sized monster that’s partially protruding from a wall, paleontologist John-Paul Hodnett told CNN.

The sharks lived about 330 million years ago in what is known as the Late Mississippian geologic time period, when much of North America was covered by oceans. When they died, their remains were encased in sediment that eventually became the limestone where the cave formed.

“There’s hardly ever any any record at all of sharks teeth coming from these rocks. So that was exciting, Hodnett sad. “So this is a brand new record of sharks from a particular layer of time.”

Mammoth Cave scientists Rick Olson and Rick Toomey were mapping a remote part of the cave when they started seeing shark fossils, according to Vincent Santucci, senior paleontologist with the National Park Service.

They sent photos of their find to Hodnett, because he’s an expert on Paleozoic sharks. He works at Maryland’s Dinosaur Park, a fossil site near Washington, DC, and does support research for the National Park Service.

There were quite a few shark teeth in the photos, Hodnett said, but he also saw cartilage that he thought might be a shark’s skeleton. That’s pretty rare because cartilage is softer than bone, so it’s not often preserved.

When the scientist visited the cave in November, he realized he was looking at something much bigger.

“It turns out is actually not a skeleton, it is actually just parts of the head. And the head itself is pretty big,” Hodnett said.

By studying its teeth, Hodnett was able to determine that the fossil was part of a species called Saivodus striatus that was about the size of a modern great white shark — about 16 to 20 feet long.

He said they don’t know how much of the shark is still entombed in the rock.

“It’s super exciting, but not exactly the most easy thing to study,” Hodnett said. “Caves are a very special environment, so it’s not ideal to be removing big chunks of rock out of it and damage the the internal environment by doing this.”

Getting to this part of the cave is a challenge of its own. Hodnett said they had to crawl on hands and knees for about a quarter mile to reach their prize.

“It’s gonna be very hard to bring the appropriate equipment in there to to properly excavate the specimen out of the cave,” he said.

Hodnett said he is still studying the fossil specimens he has collected from the cave, but he’s already learned a lot. He estimates that he’s found the fossils of about 150 different sharks from 15 to 20 different species.

Most of the fossil record from the Late Mississippian period was found in Europe, so this could answer a lot of questions about what was going on then in North America.

“We literally just scratched the surface, and the sharks are just coming out from that scratch,” Hodnett said. “So, hopefully, with more field work, we’ll get another good batch of specimens to kind of help get at least some more rich diversity.”

The researchers plan to present their preliminary findings in October at a meeting of the Society of Vertebrate Paleontology.

Santucci said the fossils were found in a remote part of the park that people can’t visit without special permission, but they don’t want to reveal the exact location.

Eventually, he said, they’ll display the fossils in the park and online. But, he says, the project is just getting started.