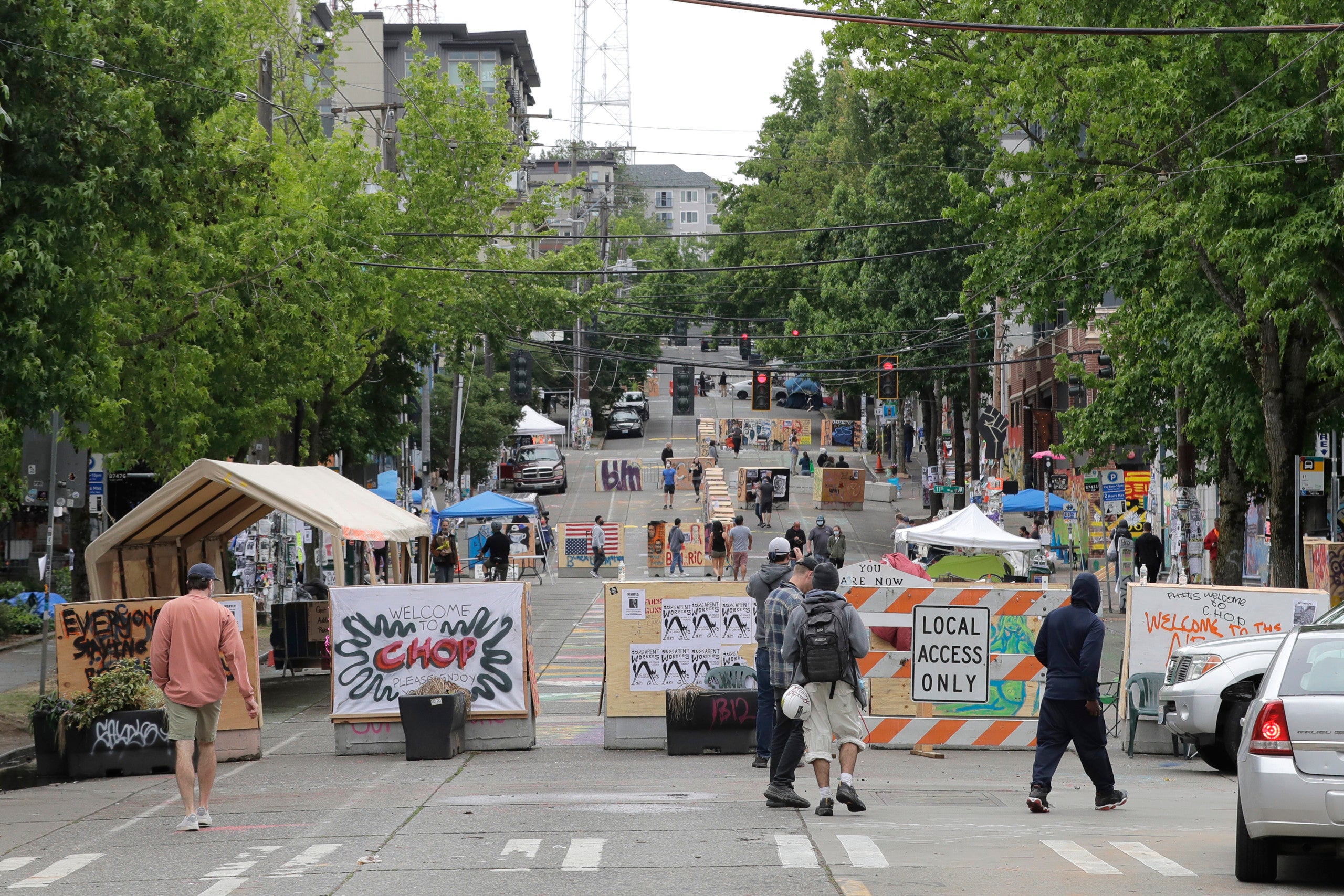 A sign on a barricade reads "Welcome to CHOP," Saturday, June 20, 2020, at the intersection of 10th Ave. and Pine St. at the Capitol Hill Occupied Protest zone in Seattle. A pre-dawn shooting near the area left one person dead and critically injured another person, authorities said Saturday. The area has been occupied by protesters after Seattle Police pulled back from several blocks of the city's Capitol Hill neighborhood near the Police Department's East Precinct building. (AP Photo/Ted S. Warren)
by: LISA BAUMANN, Associated Press
Posted: Jun 20, 2020 / 05:17 PM EST / Updated: Jun 20, 2020 / 05:17 PM EST

The shooting happened at about 2:30 a.m. in the area near the city’s downtown that is known as CHOP, which stands for “Capitol Hill Occupied Protest,” police said.

Officers responding to the shooting initially had trouble getting to the scene because they were “were met by a violent crowd that prevented officers safe access to the victims,” police said on their blog.

Two males with gunshot wounds arrived in a private vehicle at Harborview Medical Center at about 3 a.m., said hospital spokesperson Susan Gregg. The 19-year-old man died and the other person was in critical condition in the intensive care unit.

The suspect or suspects fled and investigators had no description of the shooter or shooters as of Saturday morning, police said.

“Homicide detectives responded and are conducting a thorough investigation, despite the challenges presented by the circumstances,” police said.

The CHOP zone is an area where protesters cordoned off several blocks near a police station in Seattle’s Capitol Hill neighborhood following demonstrations against police violence since the police killing of George Floyd in Minneapolis several weeks ago.

Seattle police largely retreated from the zone after clashes with protesters ended with people throwing things at police and police tear gassing people and using other crowd control munitions. Protesters and others have said the police overreacted. City officials have said they are still communicating with protest leaders, who had pledged to keep the peace in the zone.

The scene in the protest zone was quiet Saturday morning, hours after the shooting. People pushed baby strollers and other visitors milled about in the cool, cloudy weather, taking photos of themselves with CHOP signs. Protest organizers held a meeting to discuss the early morning shootings.

The zone has drawn the continued ire of President Donald Trump. His tweets about possibly sending in the military have been met with condemnation from Seattle Mayor Jenny Durkan and Gov. Jay Inslee, both Democrats.

Asked about the shooting Saturday, Inslee said “we need to have a way for the community to have a way to speak and for police and fire services to be provided.”

Inslee added: “One way or another we obviously need to provide a way to offer protection for people, and that’s a necessity.”