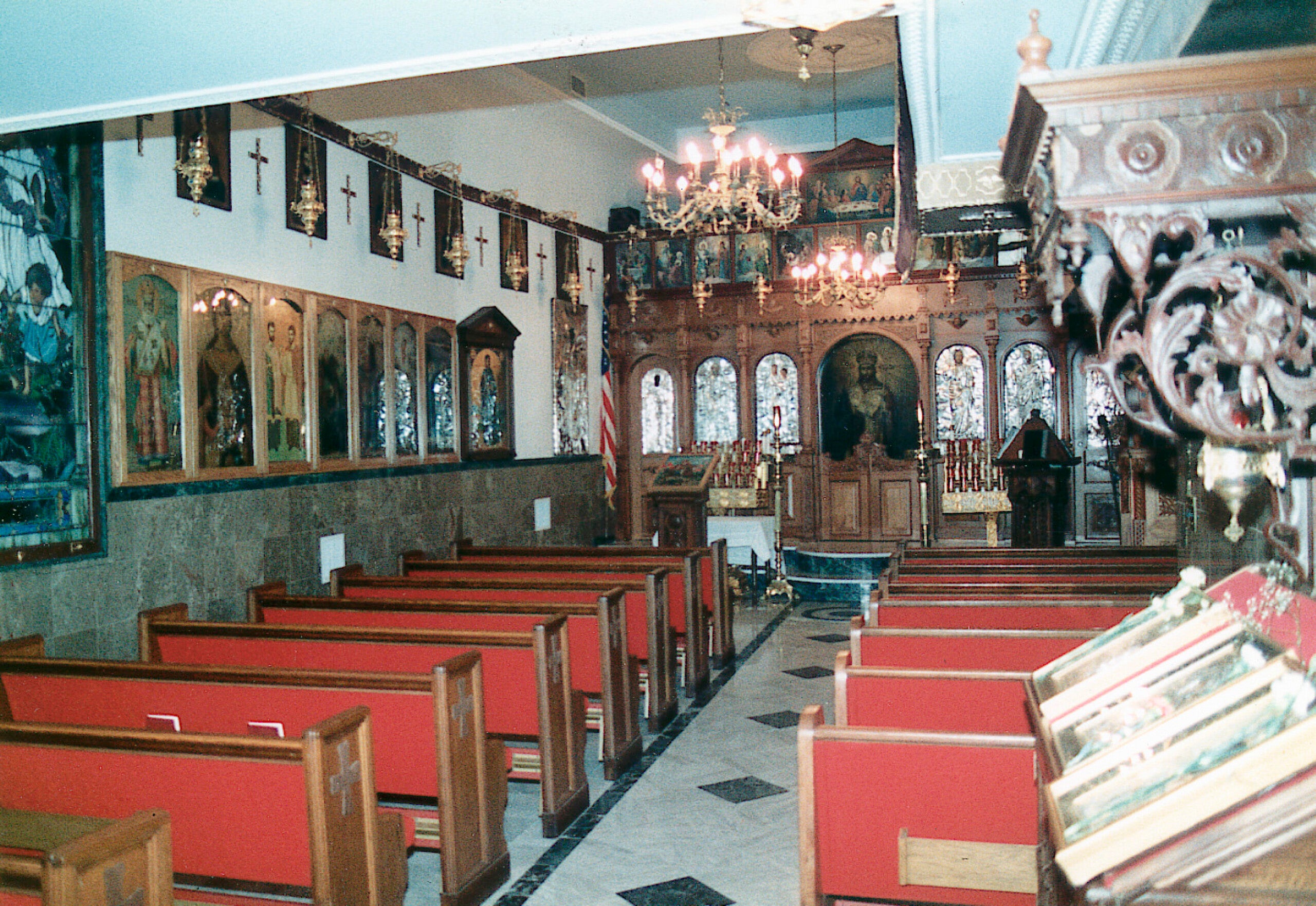 This undated photo provided the Greek Orthodox Archdiocese of America in September 2021 shows the chapel of the former St. Nicholas Greek Orthodox Church, which was located in New York's financial district. St. Nicholas was the only house of worship destroyed in the Sept. 11, 2001 attacks and is currently being rebuilt as a church and national shrine. (Greek Orthodox Archdiocese of America via AP)
by: PETER SMITH Associated Press
Posted: Sep 8, 2021 / 11:04 AM EST / Updated: Sep 8, 2021 / 11:04 AM EST

(AP) — The domed sanctuary rising in Lower Manhattan, where workers are busy installing translucent Greek marble in time for a ceremonial lighting on Sept. 10, bears little resemblance to the modest parish church that John Katsimatides had discovered years ago.

He often visited the old St. Nicholas Greek Orthodox Church to say a prayer and light a candle as he went to or from work nearby on the 104th floor of the World Trade Center’s north tower. The church stood as a quiet oasis amid the soaring financial district.

John Katsimatides “was thrilled that there was a Greek church right across the street from where he worked,” recalled his sister, Anthoula Katsimatides. “St. Nicholas was very special to him.”

In the immediate aftermath the Sept. 11, 2001, terrorist attacks, John’s relatives held on to hope that he might have survived. They put up missing-person posters in Lower Manhattan and searched the streets and hospitals for him. But as the days stretched into weeks, “our priest insisted that we, for the sake of his soul, read the prayer rites” marking his death, Anthoula said. John, 31, a corporate bonds broker at Cantor Fitzgerald, was among the nearly 3,000 people killed on 9/11.

The old St. Nicholas church was also destroyed that day. While no one was killed in the building, it was crushed beneath the falling south tower — the only house of worship destroyed in the attacks.

“When we discovered … that St. Nicholas was also lost, we thought that there was some kind of a message there, that the victims did not die alone,” Anthoula Katsimatides said. “I remember my mom saying that … John and the other victims were being cradled by St. Nicholas.”

This Sept. 10, the eve of the date 20 years after the nation’s deadliest terrorist attack, she’ll attend the ceremonial lighting of St. Nicholas Greek Orthodox Church and National Shrine, being built to replace the parish church and to honor those who were lost.

The ceremony will be a milestone in a project long beset with bureaucratic tangles and financial woes but now on track for completion next year.

“St. Nicholas brings me close to my brother,” Anthoula Katsimatides said. “Being able to come and worship at the site of my brother’s death, in a beautiful chapel that not only honors John but all the victims that died that day and is a symbol of this rebirth, is unbelievably important to me now.”

The lighting of the church will come from within. Through an innovative process, interior lights are being designed to illuminate thin panels of marble, mined from the same Pentelic vein in Greece that sourced the Parthenon, the ancient temple in Athens.

The church is being built in an small, elevated park overlooking the World Trade Center memorial plaza, close to the reflecting pools that mark where the twin towers once stood. A huge, bronze sphere that once stood between the towers now stands, dented and damaged, in the park just beyond the chapel’s doors. Tour and school groups often gather on a flight of steps leading to the shrine.

The shrine’s concrete shell, passed daily by streams of tourists, has been one of the most visible signs of the unfinished work of the ground zero rebuilding effort. Work to install its marble cladding has proceeded at a fast pace in recent weeks in time for the ceremonial lighting, though the church isn’t slated to be completed until next year.

The church is designed by Spanish architect Santiago Calatrava, with its dome, windows and iconography inspired by historic former Byzantine churches, including the world-renowned Hagia Sophia in Istanbul. A Greek iconographer is integrating traditional designs with imagery from 9/11, including tributes to slain rescue workers.

“The translucent areas of the facade are intended to give the church a dim light, like a beacon of hope, during the night,” Calatrava said. “Building the church with Pentelic stone adds another level of symbolism, because … I consider Hagia Sophia the Parthenon of Orthodoxy.”

Given its prominent location near the 9/11 Memorial & Museum, the shrine is destined to become a signature American expression of Eastern Orthodoxy, an ancient Christian communion that still predominates in Greece and much of Eastern Europe but has a slender share of the U.S. Christian population.

In addition to its sanctuary, the shrine will have a separate space for meditation and reflection for people of all faiths.

“It’s going to have a rich liturgical life” as a church, said Michael Psaros, vice chairman of the Friends of St. Nicholas, the private entity overseeing the project in cooperation with the Greek Orthodox Archdiocese of America. “But this beautiful shrine we’re building belongs to New York, it belongs to the U.S., and it belongs to the world.”

That inclusiveness “is carrying on what St. Nicholas was in the past,” said Olga Pavlakos, vice president of the parish. She was baptized in the old church, where her parents were married and her grandparents worshiped.

“Whoever stepped in to St. Nicholas, whether they were Greek, non-Greek, any race, religion, we accepted everybody,” she said. If “they were poor, they needed something to eat, they wanted soup, everybody was accepted.”

Greek immigrants founded St. Nicholas on Lower Manhattan’s Cedar Street in 1916, converting a former tavern into a church and topping it with a small belfry and cross. According to parish lore, newly arrived Greek immigrants came there to offer thanks to St. Nicholas, patron of seafarers.

“Whatever we did in St. Nicholas was all volunteer,” said Pavlakos. “It was a poor parish.”

Over the decades, even as the church was islanded by a parking lot and dwarfed by the World Trade Center, parish leaders refused to sell to land-hungry developers. By the turn of the century, its small core of members were still coming in from surrounding boroughs and communities to worship.

Since 9/11, parishioners have worshipped at various parishes in the region. “We kept waiting” to return, Pavlakos said. “We never thought that it would take 20 years.”

The archdiocese always intended to rebuild, but the question was where, given all the components involved in reconstruction at ground zero. The archdiocese and the Port Authority of New York and New Jersey, which owns the trade center, ended up in litigation in 2011 before settling on a site on Liberty Street, near the old church. Officials ceremonially broke ground in 2014.

But a new crisis arose.

Costs soared beyond projections, and construction halted in late 2017 after the archdiocese fell behind on payments. The archdiocese, which had financial woes of its own, used $3.5 million in funds dedicated to the shrine for its own operating deficit and had to repay it.

The archdiocese appointed an investigating committee that attributed the St. Nicholas cost overruns to expensive change orders. Those architectural enhancements “may have been made with the best of intentions” for a shrine of such significance, but they pushed the cost far above the archdiocese’s public disclosures, the committee said in 2018.

The archdiocese also implemented the committee’s recommendation of turning the project management over to a separate entity. That entity, Friends of St. Nicholas, led by a core of wealthy Greek-Americans, has completed fundraising for the church, with estimated costs of close to $85 million, and is now raising an endowment for maintenance and security.

“The archdiocese is good at a lot of things, but building a national shrine in the most expensive place in the history of Western civilization was not exactly its forte,” Psaros said.

Archbishop Elpidophoros, who assumed leadership of the nationwide archdiocese in 2019, said the symbolism of the shrine is important.

The project is one of the final components in reconstruction in the section of Lower Manhattan devastated on 9/11. A performing arts center is under construction, due to open in 2023, and an additional office building and apartment complex are planned.

“One of the top priorities has been to move the World Trade Center campus toward completion, and one of the most important aspects of that is the national shrine,” Port Authority Executive Director Rick Cotton said. The church project is bringing to completion “those aspects of the site which are really dedicated to the spiritual memory of the those who were killed in the attack.”

The project has personal significance for the Rev. Alex Karloutsos, longtime vicar-general for the archdiocese. In the hours and days after the 9/11 attacks, he was among clergy offering spiritual support to recovery workers.

“People at that point were looking for something sacred, because they had just experienced that which is evil,” he said.

Among the surviving artifacts from St. Nicholas was a paper icon of St. Dionysius of Zakynthos — the patron of forgiveness for having forgiven his brother’s murderer.

“That icon was very poignant, because at the end of the day, for us to go outside of our hatred, we even had to forgive those who destroyed our brothers and sisters,” Karloutsos said.