Some military discharges mean no benefits after service ends 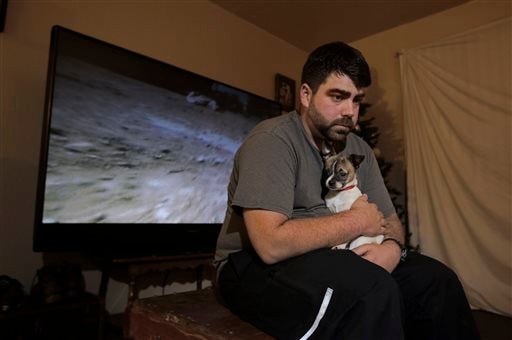 ST. LOUIS (AP) – No medical or mental health care. No subsidized college or work training. For many who leave the U.S. military with less-than-honorable discharges, including thousands who suffered injuries and anguish in Iraq, Afghanistan and elsewhere, standard veterans benefits are off limits.

The discharge serves as a scarlet letter of dishonor, and the effects can be severe: Ex-military members with mental health problems or post-traumatic stress disorder can’t turn to Veterans Affairs hospitals or clinics; those who want to go to college aren’t eligible for the GI Bill; the jobless get no assistance for career training; the homeless are excluded from vouchers.

“It’s an indelible mark of their service that follows them for the rest of their lives into the workforce, through background checks, social relationships, and it precludes them from getting the kind of support that most veterans enjoy,” said Phil Carter, an Iraq War vet and senior fellow at the Center for A New American Security.

U.S. Rep. Mike Coffman, a Colorado Republican who’s on the House Armed Services Committee, believes many of those men and women suffered battle-related problems that affected their behavior, especially PTSD and traumatic brain injury. A 2005 study showed Marines deployed to combat who were diagnosed with PTSD were 11 times more likely to receive less-than-honorable discharges, said Brad Adams, an attorney who works with the San Francisco-based organization Swords to Plowshares.

Josh Redmyer, 30, served in the Marines for seven years, including three stints in Iraq, where he watched a close friend die and developed PTSD. Redmyer said he developed alcohol and drug addictions that led to bad behavior, and he received an other-than-honorable discharge in 2012. He said he’s survived suicide attempts and “near-death” overdoses.

Now living in California, Redmyer’s working as a delivery driver and trying to restore his VA medical benefits. He said he takes responsibility for “mistake after mistake after mistake,” but can’t understand how someone who risked his life for his country can’t get treatment for PTSD.

“What it did to my life after what I gave to them, I don’t think it’s ethical or moral or fair,” he said.

Varying levels of bad paper discharges exist. A general discharge is for those whose service was generally satisfactory, but who engaged in minor misconduct or received non-judicial punishment. Recipients are usually eligible for VA medical and dental services, VA home loans and burial in national cemeteries, but can’t receive educational benefits through the GI Bill.

Virtually no post-military benefits are available below that level.

An other-than-honorable discharge is an administrative action for those with behavior problems such as violence or use of illegal drugs. A bad conduct discharge is punishment for a military crime, and dishonorable discharges are for offenses such as murder or desertion. With those discharges, the VA doesn’t consider the former service members veterans for the purposes of VA benefits.

“There is a small percentage of folks who were court-martialed and convicted, and they have earned their bad paper,” Carter said. “The vast majority of this population was discharged administratively, generally because of some minor misconduct.”

Once people are discharged, the Department of Veterans Affairs can extend medical and mental health benefits on a case-by-case basis to those whose disabilities were service-connected, the VA said.

But Adams said that recourse is help to very few. “The onus is on the veteran,” he said. “The standards have imposed a very high burden.”

“They have a hard time maintaining employment and navigating the transition back to civilian life,” said Jamison Fargo, associate professor of psychology at Utah State University.

An analysis published this fall in the Journal of the American Medical Association, which Fargo co-wrote, tracked nearly 450,000 VA patients who served in Iraq and Afghanistan from 2001 to 2011. While 5.6 percent had general discharges for misconduct, they accounted for 28.1 percent of those who’d been homeless within their first year out of the military. That didn’t even take into account those with discharges that made them ineligible for VA care, and who were potentially more likely to be homeless.

Sakrisson said the Defense Department has made a “concerted effort” to assist those with PTSD who seek to have their discharge upgraded, through media campaigns, outreach to advocacy groups and military service organizations, even tracking down homeless ex-service members identified by the VA.

Coffman said a better approach would be for the military to work with troubled service members earlier, so more leave with honorable discharges.

And while being discharged for bad behavior might draw little sympathy, Adams said, “We’re talking about people who have deployed multiple times, served in combat. That has to account for something.”