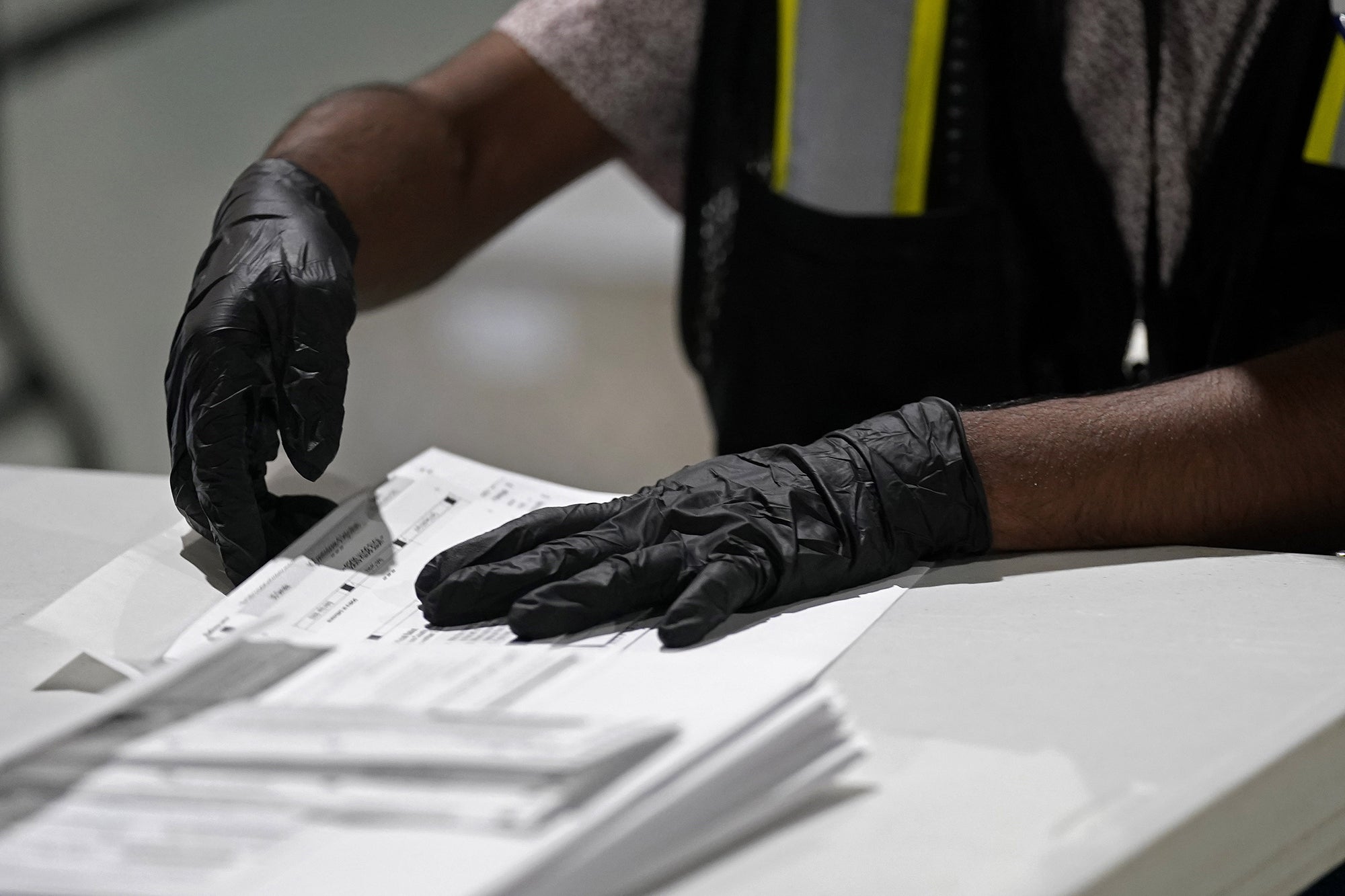 FILE - In this Thursday, Sept. 3, 2020, file photo, a worker prepares absentee ballots for mailing at the Wake County Board of Elections in Raleigh, N.C. A federal appeals court has ruled that North Carolina can accept absentee ballots for more than a week after Election Day as long as they were postmarked by Nov. 3. (AP Photo/Gerry Broome, File)
by: Jeremy Herb, CNN
Posted: Oct 29, 2020 / 08:47 AM EST / Updated: Oct 29, 2020 / 08:47 AM EST

(CNN) — The Supreme Court on Wednesday allowed Pennsylvania and North Carolina to count ballots received after Election Day, victories for Democrats who have been pushing for states to allow additional time due to the vast number of mail-in votes cast during the coronavirus pandemic.

The court declined to take up a challenge from Pennsylvania Republicans over the state’s mail-in ballot deadline, leaving in place — for now — a state Supreme Court decision that ballots can be received up to three days after the election, even if there is no legible postmark. Later, the court allowed for counting ballots in North Carolina received up to nine days after the election as long as they are postmarked by Election Day.

But that may not be the end of the mail-in ballot court fight.

The Supreme Court’s decisions in Pennsylvania and North Carolina, two important states in the presidential election, came one day after the court rejected an appeal from Democrats to allow mail-in ballots in Wisconsin to be received three days after Election Day, so long as they were postmarked by November 3.

Election law experts have been cautioning in the run-up to the election that it’s unlikely the courts will play a pivotal role in the election’s outcome. And mail-in ballots received after Election Day will be a tiny percentage of the total ballots.

But if the election is close — and if Pennsylvania, for instance, is the decisive state and the ballots received after November 3 could make a difference — the legal issues surrounding mail-in ballots arriving after Election Day could suddenly catapult to the forefront of the presidential contest, where Republicans seek to toss ballots received after November 3 and Democrats argue for including them.

“If (Pennsylvania) PA isn’t the tipping point, or it is but it’s not hyper-close, this all won’t matter, at least for this election,” tweeted Steve Vladeck, a CNN legal analyst and University of Texas law school professor.

Pennsylvania officials notified the Supreme Court on Wednesday that the state had issued guidance to county boards to “securely segregate” ballots received after Election Day, allowing them to be identified in case of future legal action.

And in Minnesota, the Trump campaign filed an action against the secretary of state on Wednesday to segregate mail-in ballots received late, while Republicans appeal a federal court decision keeping in place a seven-day period for ballots to arrive late so long as they are postmarked by Election Day.

Deadlines for receiving mail-in ballots vary by state. In 28 states, ballots must be received on Election Day, but in 22 states and the District of Columbia, they need to be postmarked by Election Day but can arrive later.

President Donald Trump has argued, falsely, that the results of the election should be known on November 3, when several key states, including Pennsylvania, have said it will take them longer than one night to count a major surge of absentee ballots. Results reported on election night are always unofficial and certified by states later.

But in the Supreme Court’s Wisconsin ruling keeping in place a federal appeals court decision to require ballots to be received by Election Day, Justice Brett Kavanaugh seemed to be in alignment with Trump’s thinking.

Kavanaugh wrote that states have set mail-in deadlines on Election Day “to avoid the chaos and suspicions of impropriety that can ensue if thousands of absentee ballots flow in after election day and potentially flip the results of an election.”

“And those States also want to be able to definitively announce the results of the election on election night, or as soon as possible thereafter,” he added.

Rick Hasen, an election law expert at the University of California, Irvine, and a CNN analyst, wrote in a Washington Post op-ed this week that Kavanaugh’s opinion probably won’t matter — but that if the issue winds up back in the courts, “there’s great reason to be worried about the court’s protection of voting rights and the integrity of the vote.”

In the Pennsylvania decision Wednesday, in which the court declined to expedite and hear the case so close to the election, some of the court’s conservative justices hinted at skepticism toward the Pennsylvania state court’s ruling extending the mail-in deadline. In a statement accompanying the order, Justice Samuel Alito, joined by Justices Clarence Thomas and Neil Gorsuch, wrote that the court could not step in this close to the election but added there was a “strong likelihood that the State Supreme Court decision violates the Federal Constitution.”

No other justice commented, though the order suggested more opinions could come. The court’s newest justice, Amy Coney Barrett, did not vote in the Pennsylvania or North Carolina cases because of the need for a prompt resolution, the court said.

The threat of foreign election interference

Sen. Marco Rubio, the acting Senate Intelligence Committee chairman, had a stark warning on Wednesday: Now is the time to be most on guard for foreign election interference.

“The bulk of disinformation attacks prepared by our adversaries were designed for the days before & just after Election Day,” the Florida Republican tweeted. “They may come faster than they can be spotted & called out, so word to the wise, the more outlandish the claim, the likelier it’s foreign influence.”

Rubio’s warning comes one week after Director of National Intelligence John Ratcliffe said in a statement that Iran and Russia had obtained voter registration information and Iran was responsible for threatening emails sent to voters purporting to be from a far-right group.

The emails were sent to voters in Florida, and members of the Florida congressional delegation are receiving a briefing this week from the Office of the Director of National Intelligence on the interference efforts.