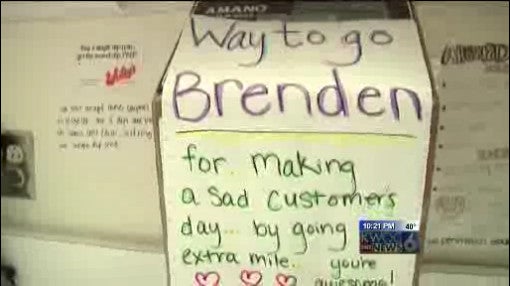 MOLINE, Ill. (KWQC) – A teen’s small act of kindness is making a big impression on the community.

Moline high school student Brenden McGee was working when a stranger pulled into the drive through in tears.

He decided to cover her bill out of his own pocket, learning later the woman’s husband had recently passed away.

“It’s been shared way more than I expected it to be,” the 16-year-old said in a follow-up interview on Tuesday. “It’s just really overwhelming.”

But now he’s overwhelmed for a different reason – a challenge he and his mom, Marcy McGee, never expected to face.

“I just thought that I slept on my neck wrong and it was hurting,” Brenden said.

“He’s laughing, he’s smiling, he’s joking, he’s being a teenager,” Marcy said. “There was no sign.”

“As soon as he turned around, I noticed his neck was swollen to almost twice the size,” Marcy said. “Everybody I talked to said that it sounded like mono.”

Brenden’s doctor, however, didn’t think it was mono.

“And then we were told to go straight to the emergency room,” Brenden said.

“So they called Thursday, at one o’clock last Thursday, and confirmed that it was lymphoma and that it looked like Hodgkin’s,” Marcy said.

Marcy found out first but she called in family so they could tell Brenden together. That’s when his managers Rhonda VanDyke and Madonna Denton stepped in to help.

“She was just worried that she wasnt going to have enough food to feed the family,” Denton said. “I said, ‘Don’t you worry.’ I said, ‘Rhonda and I will take care of you.'”

“We took some chicken and some lunch meat, grapes, and chocolate milk because that’s his favorite,” VanDyke said.

The restaurant covered the bill. It has also made a financial contribution to Brenden’s fund.

“We’re a family business,” co-owner Jeff Tunberg said. “It’s a large family and not everybody knows everybody, but everybody knows Brenden now because of what he did, and so a member of the family is hurting and people are gathering around and doing what they can to support them.”

“We want him to know we’re pulling and praying for him,” Jon Tunberg said.

So are Brendon’s friends, who have already launched several fundraisers to help cover the medical bills.

“It is really scary to think about everything that’s going to happen and what I’m going to have to go through to fight against this but definitely the support of all my friends, that’s what is really getting me through all of it,” he said.

Moline students are organizing a fundraiser dance. For more information on ways to support Brenden, visit Brenden’s Fight on Facebook or his GoFundMe page.