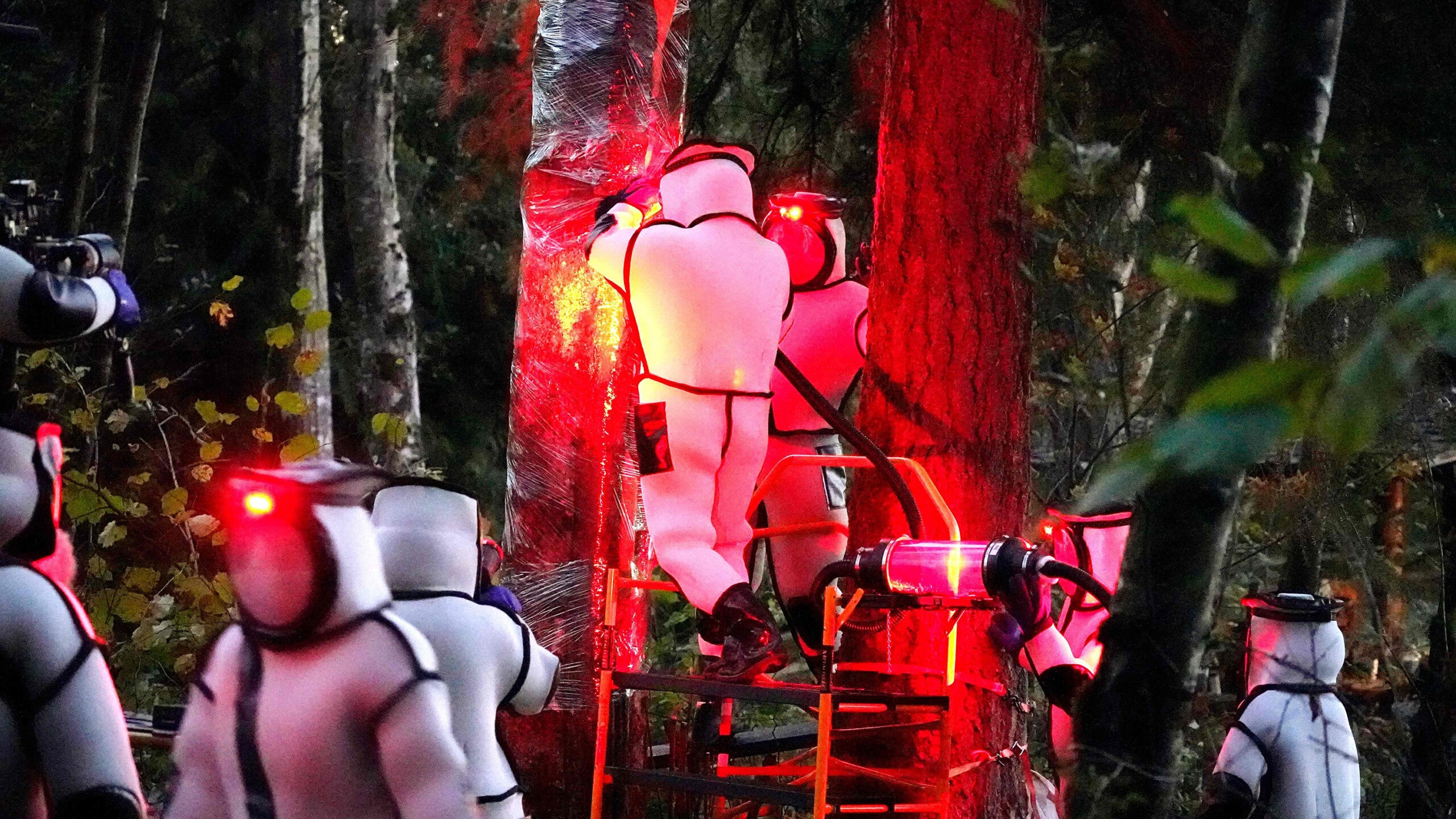 Washington State Department of Agriculture workers, wearing protective suits and working in pre-dawn darkness illuminated with red lamps, vacuum a nest of Asian giant hornets from a tree on October 24, 2020, in Blaine, Washington. - Scientists in Washington state discovered the first nest earlier in the week of so-called murder hornets in the United States and worked to wipe it out Saturday morning to protect native honeybees. Workers with the state Agriculture Department spent weeks searching, trapping and using dental floss to tie tracking devices to Asian giant hornets, which can deliver painful stings to people and spit venom but are the biggest threat to honeybees that farmers depend on to pollinate crops. (Photo by Elaine Thompson / POOL / AFP) (Photo by ELAINE THOMPSON/POOL/AFP via Getty Images)
by: Allen Kim, CNN
Posted: Nov 11, 2020 / 09:35 PM EST / Updated: Nov 11, 2020 / 09:35 PM EST

(CNN) — It turns out there were a lot more queens in the first-ever giant Asian “murder hornet” nest found in the US than what they initially discovered.

Researchers approximate nearly 200 queens were produced from that single nest, which is a significant uptick over the two queens they originally found.

Entomologists from the Washington State Department of Agriculture (WSDA) eradicated and cleared out the nest found inside of the cavity of a tree near Blaine, Washington on October 24.

The researchers were able to vacuum out 85 hornets from the nest, most of which were workers with only two queens being among those counted.

However, after opening up the tree on October 29, they discovered a lot more inside. Scientists counted 76 emerged queens — all but one are likely new virgin queens — and the entomologists believe that based on size, 108 capped cells with pupae are likely queens as well. Three queens were also captured nearby in a bucket of water, the researchers said.

Each of those queens could have potentially spawned a new nest had they escaped, and it’s unclear if any other queens managed to get away.

“There’s no doubt that had we not intervened and destroyed this nest, we would be starting with that number of 200 as a possibility,” entomologist Sven-Erik Spichiger said during a video conference. “It really seems like we got there just in the nick of time.”

Spichiger said that nests can grow large enough to hold nearly 4,000 cells, so the nest found in Washington was relatively small by comparison.

There were approximately 776 cells inside, 6 combs — structures that hold the hornet larvae as they develop — 6 unhatched eggs, 190 total larvae, 112 workers, 9 drones, 108 capped cells with pupae and 76 queens.

The researchers believe that there are additional nests in the region. The WDSA will continue tracking and trapping Asian giant hornets for three years to ensure the area is free from the hornets.

The Asian giant hornet nest was originally discovered on October 22 in a tree cavity near Blaine. Using a new type of trap, WSDA researchers tagged several captured hornets with radio trackers, which they used to lead them to the nest.

Asian giant hornets typically nest in the ground but can occasionally be found nesting in dead trees.

First discovered in Washington state in December 2019, Asian giant hornets are an invasive species not native to the US. They are the world’s largest hornet, and they prey on honey bees and other insects. A small group of Asian giant hornets is capable of killing an entire honey bee hive in a few hours, the WDSA said.

And honey bees are not the only reason these creatures are nicknamed “murder hornets.” Multiple stings from Asian giant hornets can kill a human, according to experts at Washington State University.