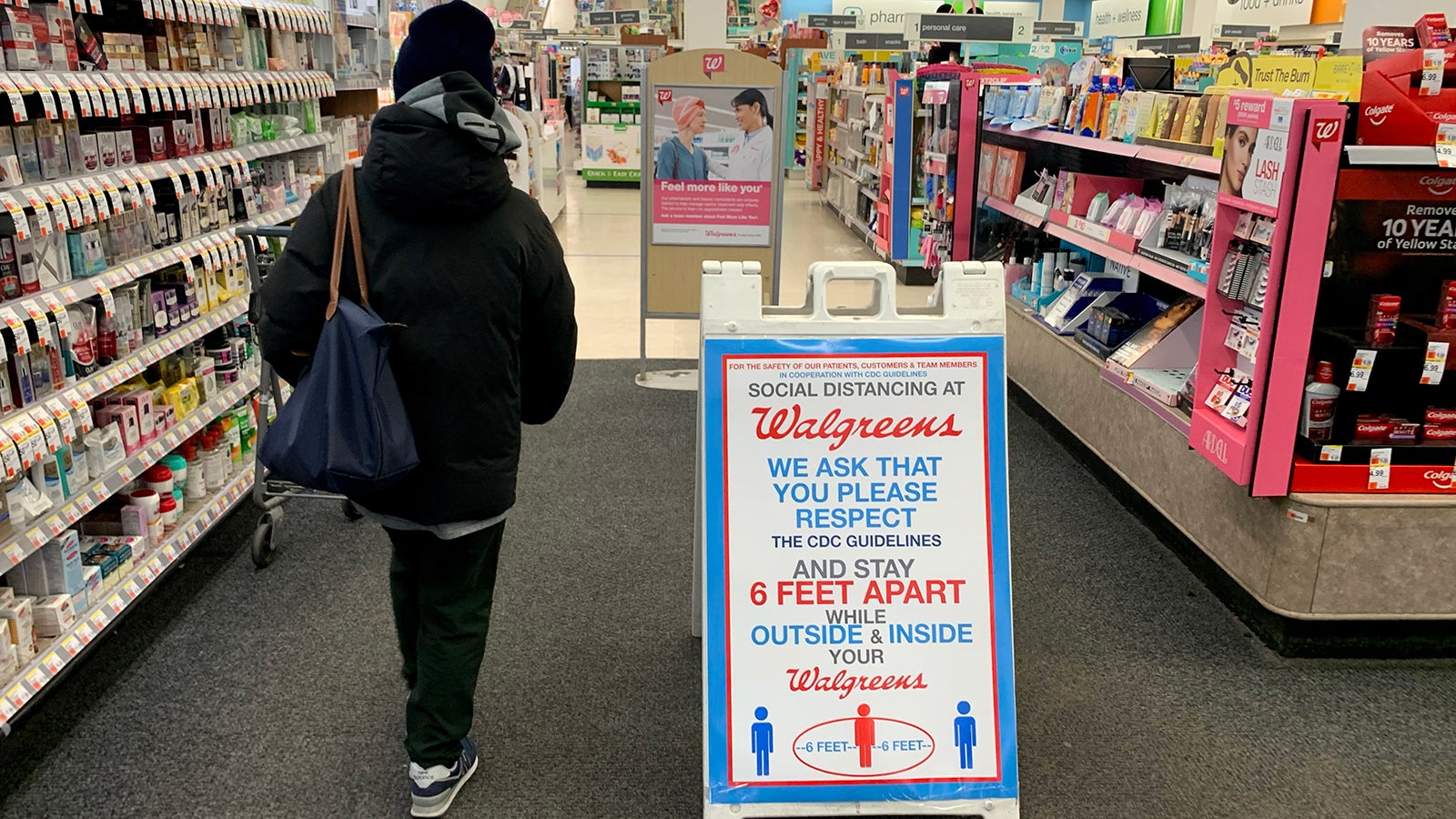 CAMBRIDGE, MASSACHUSETTS - MARCH 23: Walgreens display social distancing guidelines at the entrance of the store on March 23, 2020 in Cambridge, Massachusetts. Massachusetts Governor Charlie Baker ordered all non-essential businesses to close by noon on March 24 in an attempt to stop the spread of COVID-19. Grocery stores and pharmacies will remain open, and restaurants will still be able to sell food for take-out service. (Photo by Maddie Meyer/Getty Images)
by: By Nathaniel Meyersohn, CNN Business
Posted: Oct 14, 2020 / 04:07 PM EST / Updated: Oct 14, 2020 / 04:07 PM EST

(CNN) — Drug stores like Walgreens, Rite Aid and CVS have remained open throughout the pandemic for shoppers looking to fill prescriptions and stock up on essential items.

But people aren’t going to such chains as much as they used to— and one of the reasons is alarming to some medical experts.

People have been filling fewer prescriptions in storesduring the pandemic with some doctor’s offices closed, many elective procedures on hold and more shoppers switching to mail order. This has also choked off impulse purchases and unplanned items that customers grab when they visit stores to pick up their prescriptions.

That’s squeezing drug store chains like Walgreens, which reports earnings Thursday, and CVS. Visits to drug stores fell around 12.8% from the prior year for the four weeks ending on October 4, according to market research firm IRI.

The number of prescriptions filled in August fell 4% compared with the same period last year, according to the latest data from investment bank Evercore ISI.

Additionally, some people have been visiting doctors offices and health clinics less often than usual in the pandemic for annual and routine checkups, say experts.

“Volume to primary care practices has decreased,” said Dr. Russell Phillips, director at the Center for Primary Care and a professor of medicine at Harvard Medical School. This has meant fewer people are being diagnosed or treated for health conditions and thus do not need to renew their medications or fill new ones.

Health experts say prescription lapses are worrisome for people with chronic issues such as diabetes, hypertension and heart disease and may have longer term health implications.

Consumers are also limiting their trips to stores because of the coronavirus and buying in bulk more often. Before the coronavirus hit, Americans shopped an average of 4.4 stores each week, according to consulting firm McKinsey. By late May, that number had dropped to 2.8.

This has hurt drug stores, which carry a smaller variety of products and are designed to be fill-in stops for customers outside of their bigger weekly hauls at grocery stores or warehouse clubs.

“You can’t do a full shop at CVS, Walgreens and Rite Aid,” said Mickey Chadha, analyst at Moody’s.

Wall Street has taken notice of drug stores’ performance compared to their competitors, driving down shares of CVS, Walgreens and Rite Aid, the three largest US drug store chains, more than 20% this year.

CVS, Walgreens and Rite Aid are trying to fight back by offering home delivery and curbside pickup and improving their food selection.

Rite Aid and CVS have partnered with Instacart to offer delivery on prescriptions and other items, while Walgreens has teamed up with DoorDash and Postmates. Walgreens struck a partnership with Kroger for mini “Kroger Express” stores that offer fresh groceries within around 50 Walgreens locations.

They are also trying to become larger stops for customers’ primary care needs.

Walgreens is planning on opening up to 700 full-service medical clinics in partnership with VillageMD located next to its stores within the next five years. CVS plans to open 1,500 “HealthHub” locations by the end of next year that have on-site dietitians and lab services.