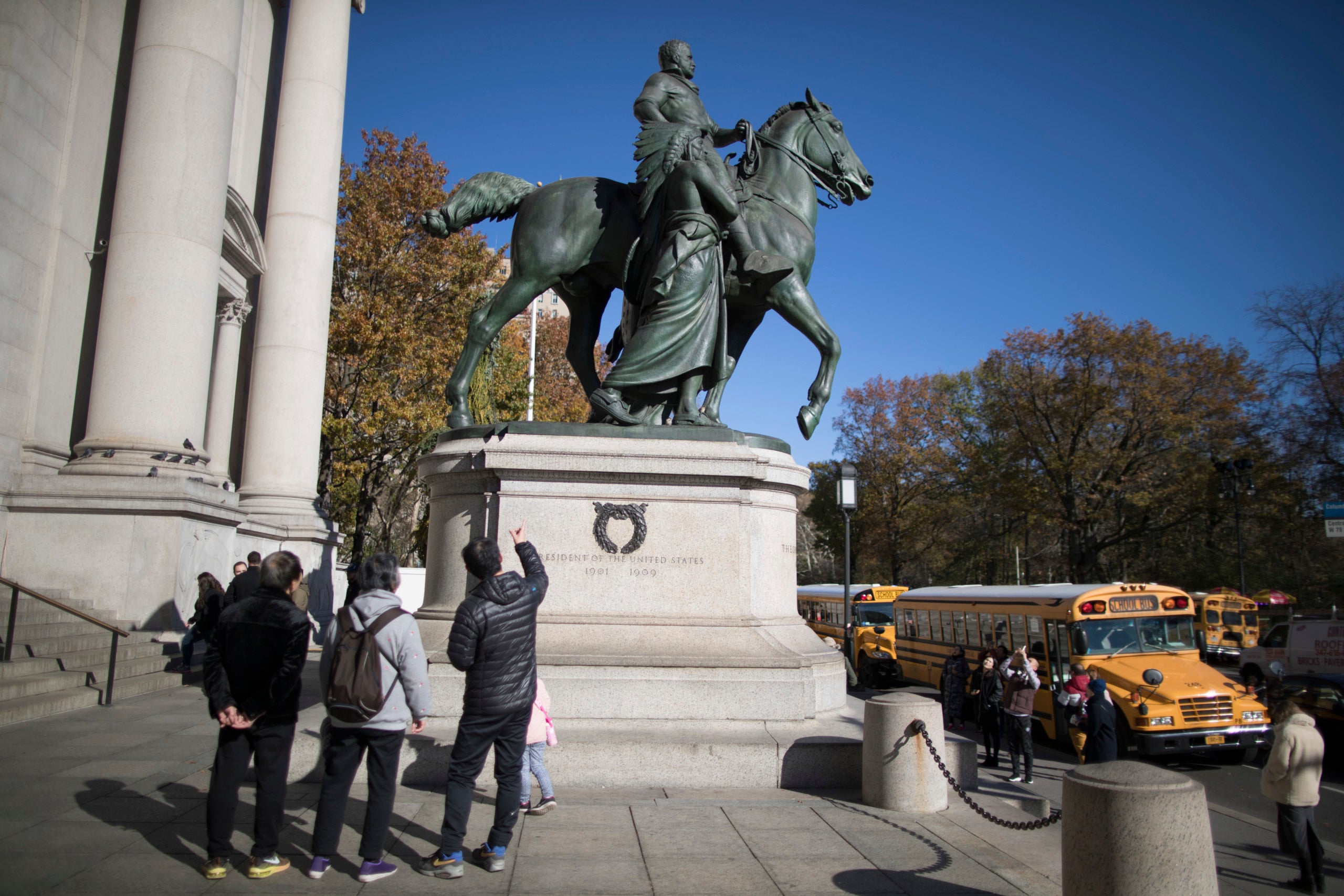 In this Nov. 17, 2017 file photo, visitors to the American Museum of Natural History in New York look at a statue of Theodore Roosevelt, flanked by a Native American man and African American man. The statue will be coming down after the museum's proposal to remove it was approved by the city (AP Photo/Mary Altaffer, File)
by: Ganesh Setty and Hollie Silverman, CNN
Posted: Jun 22, 2020 / 04:44 AM EST / Updated: Jun 22, 2020 / 04:44 AM EST

(CNN) — A statue of President Theodore Roosevelt in front of the American Museum of Natural History in New York City will be removed, a statement from New York City Mayor Bill de Blasio’s office said Sunday.

Following the museum’s request to remove the statue, which features the nation’s 26th President on a horse with a Native American man on standing on one side and an African man standing on the other, the mayor’s office announced the approval.

The announcement comes as several state’s grapple with how to handleremovals of confederate monuments and other controversial statues.

“The American Museum of Natural History has asked to remove the Theodore Roosevelt statue because it explicitly depicts Black and Indigenous people as subjugated and racially inferior,” de Blasio’s office said in a statement to CNN. “The city supports the museum’s request. It is the right decision and the right time to remove this problematic statue.”

While it was meant to celebrate Roosevelt as a “devoted naturalist and author of works on natural history,” the statue also “communicates a racial hierarchy that the museum and members of the public have long found disturbing,” a press release on the museum’s website said.

The statue, titled “Equestrian Statue of Theodore Roosevelt” was commissioned in 1925 and made its debut in 1940 as part of the state’s larger memorial to Roosevelt, according to the museum.

“To understand the statue, we must recognize our country’s enduring legacy of racial discrimination — as well as Roosevelt’s troubling viewson race,” the press release said. “We must also acknowledge the museum’s own imperfect history. Such an effort does not excuse the past but it can create a foundation for honest, respectful, open dialogue.”

“Wilson was a controversial politician, who never actually set foot in the current building,” university president Patrick Leahy said in a statement to students on Juneteenth. “Removing his name, and incorporating these earlier names, connects the centerpiece of our campus more accurately to our historical roots and eliminates a symbolic barrier to the important work of creating a truly welcoming and inclusive space in the Great Hall.”

The school will instead honor its lead designer Julian Abele, one of the first professional trained African American architects, according to a statement from the university.

Wilson, for whom the Princeton University Public and International Affairs school is named for, once called racial segregation “a benefit” and defended the enslavement of Black people by saying slaves “were happy and well-cared for.”

He also denied admission to African American men and sought to exclude them from the school’s history when he was president of the university in 1902.

Princeton was forced to reevaluate its relationship with the embattled president but did not rename the school.